Home ■ Space ■ NASA set to cover the transit of Mercury 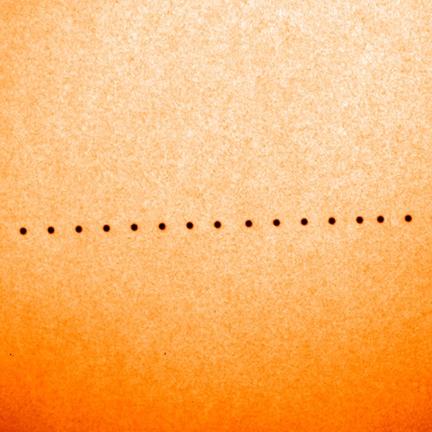 Mercury, the smallest planet in the Solar System, is set to transit across the face of the Sun on 9 May.

A transit of Mercury across the Sun takes place when it comes between the Sun and Earth and the tiny planet is seen as a small black dot moving across the face of the Sun. While comparatively rare, at around 13 per century they are much more frequent than similar transits of Venus because Mercury is closer to the Sun and orbits it more rapidly.

Transits of Mercury occur in May or November and the last was in 2006.

On 9 May, Mercury's transit will take seven and a half hours. The planet will cross the edge of the Sun and begin its transit at 11:12 a.m. UTC. It will reach mid-point at approximately 2:47 p.m. UTC, and complete the crossing at 6:42 p.m. UTC.

Mercury's orbit takes 88 Earth days, making it the fastest of all planets in the Solar System. Although its orbit takes it as close as 45.8 million kilometres from the Sun, its surface temperature varies more than any other planet because it has almost no atmosphere to retain heat. It ranges from −173 °C at night to 427 °C during the day in some equatorial regions, although the poles are constantly below −93 °C.