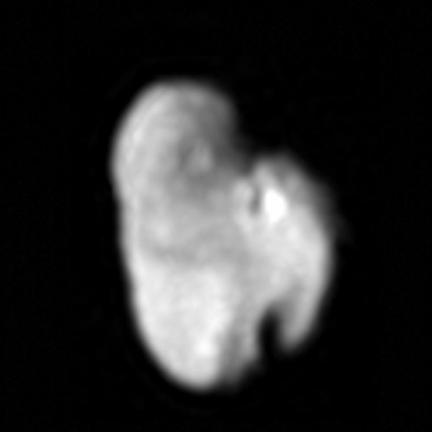 The latest data about the surface of Pluto’s tiny outermost moon Hydra confirms that it is made up almost entirely of pristine water ice.

Scientists had previously suspected as much due to its highly reflective surface.

Infrared spectral analysis on data gathered by the Ralph/Linear Etalon Imaging Spectral Array (LEISA) instrument aboard New Horizon’s spacecraft shows the surface to be similar to that of Pluto’s largest moon, Charon, which is also dominated by crystalline water ice.

But Hydra’s water-ice absorption bands are deeper than Charon’s, suggesting that ice grains on Hydra’s surface are larger.

Hydra is thought to have formed in an icy debris disc produced when water-rich mantles were stripped from the two bodies that collided to form the Pluto-Charon binary some four billion years ago.

Hydra, and another of Pluto’s moons, Nix, were only discovered in 2005 by scientists using data from the Hubble Space Telescope.

Imagery of Hydra was taken by New Horizons from a distance of around 231,000 kilometres. While more blurry than the crystal clear imagery we have become used to from New Horizons, the images appear to show at least two large craters on the moon.

The upper portion looks darker than the rest of Hydra, suggesting a possible difference in surface composition.

From the image, mission scientists estimated that Hydra is 55 kilometres long and 40 kilometres wide.

The video below shows the unusual orbits of all of Pluto's moons, in order, from smaller to wider orbit: Charon, Styx, Nix, Kerberos, Hydra.