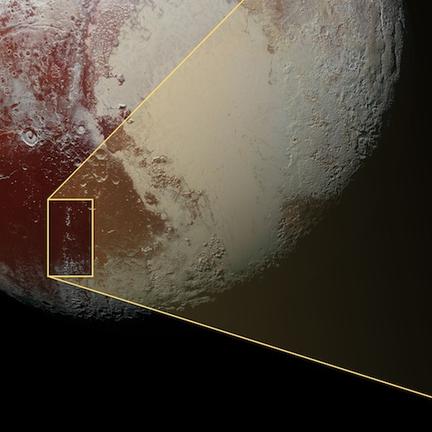 NASA scientsists have discovered a chain of snow-capped mountains in one of Pluto's most prominent features. But the snow is likely to be frozen methane, they say.

"That this material coats only the upper slopes of the peaks suggests methane ice may act like water in Earth's atmosphere, condensing as frost at high altitude," said John Stansberry, a New Horizons science team member.

Data from NASA’s New Horizons spacecraft, shown in the right inset, shows the bright ice on the mountain peaks correlates almost exactly with the distribution of methane ice, shown in false color as purple.

The mountains lie in the prominent dark brown feature on Pluto's surface scientists have dubbed Cthulhu (pronounced kuh-THU-lu and named after a character in a novel by science fiction writer H.P. Lovecraft).

It is about 3,000 kilometres long and 750 kilometres wide, stretching nearly halfway around Pluto’s equator, starting from the west of the great nitrogen ice plains known as Sputnik Planum.

The region's dark surface is thought to be covered by a layer of dark tholins – complex molecules that form when methane is exposed to sunlight.

The reddish enhanced colour image shown above as the left inset, is of a mountain range located in southeast Cthulhu that is 420 kilometres long.