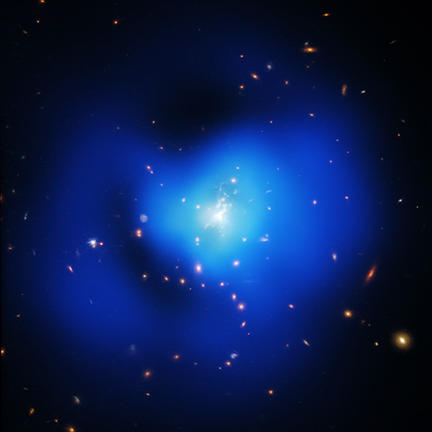 The biggest galaxies in the Universe have perplexed astronomers for decades. How do they continue to make new stars when they should have run out of gas aeons ago? By looking back in time to see galaxies at earlier stages of their development, astronomers may have uncovered their ruthless secret.

It seems that in their youth, these galaxies are bullies, stealing star-forming gas from their smaller neighbours. Tracy Webb from McGill University in Canada and colleagues describe one such plunderer in The Astrophysical Journal in September.

Galaxies don’t usually fly solo – they prefer to gather in clusters, bound by gravity. The Universe’s biggest galaxies reside at the heart of these clusters.

Astronomers can measure the age of these clusters by examining their galaxies. Our Milky Way, for instance, is about 13 billion years old, and clusters around us tend to be around the same age. When astronomers peer into the giant galaxies at the centre of these ancient clusters, they find them to be “red and dead”: their star-forming gas supplies exhausted, they have become vast nursing homes for stellar relics such as red giants. The Milky Way produces new stars at the feeble rate of about one per year.

But astronomers find clusters look very different when “middle-aged”. Just as palaeontologists dig into layers of the Earth to find how life looked in the past,  astronomers get a snapshot of how galaxies looked long ago by pointing their powerful telescopes farther into space. The further away the galaxy, the longer its light  travelled to get here. So the image we see records the way it looked at a much earlier stage of its lifecycle.

When they peered at snapshots of central galaxies in middle-aged clusters, they found nurseries rather than nursing homes. For instance, the central galaxy in the Phoenix Cluster, 5.6 billion light-years away, is forming stars at a tremendous rate: 740 times that of the Milky Way.

To maintain their prodigious growth, these middle-aged galaxies top up their supplies of star-forming gas by pulling in some of the hot intergalactic gas that makes up around 10% of the collective mass of the entire cluster. It’s like “rivers of fuel” for new star formation, Webb says.

Having started the family album, researchers wanted to get a snapshot of baby clusters and their central massive galaxies. How did these several-billion-year-old babies feed?

NASA’s Spitzer Space Telescope, launched in 2003, was up to task.  It has collected data on more than 200 galaxy clusters, some billions of light-years away, providing snapshots of these clusters as babies.

In 2013, Webb was examining these clusters one by one when she stumbled across something odd. Spitzer’s infrared camera revealed a galaxy at the centre of the young cluster known as “1049+56”, some 9.8 billion light-years away, was pumping out stars at a phenomenal rate. The galaxy was less than four billion years old, but producing stars 860 times as fast as the Milky Way.

“What’s really exciting is we hadn’t seen this growth, this building up, at such an early time,” Australian Astronomical Observatory astronomer Amanda Bauer says. But where was all the star-forming fuel coming from?

Infrared telescopes such as Spitzer could reveal the dusty regions where stars are born. But their resolution wasn’t high enough to pinpoint if the gas source was the rivers of intergalactic gas that older galaxies draw on – or something else.

To find out, Webb and her colleagues pointed the Hubble Space Telescope towards 1049+56, aiming its high-resolution optical lens at the cluster’s centre. But instead of seeing the rivers of hot intergalactic gas feeding the giant galaxy, they caught it in the act of stealing from a small gas-rich neighbouring galaxy.

Like a cat mid-way through swallowing a mouse, the giant galaxy had already gulped down most of the smaller galaxy’s gas. All that remained was a gas tail, dangling from the galaxy’s maw.

Hubble could spot little clumps of stars forming along the gas tail where patches of slightly denser gas collapsed in on itself. These star nurseries, or “beads on a string”, were a tell-tale sign the robbed galaxy had been rich in star-forming gases, Webb says.

Bauer, for one, will be watching closely: “I’m thrilled they’ve been able to find this key piece. I’ll be cheering them on.”