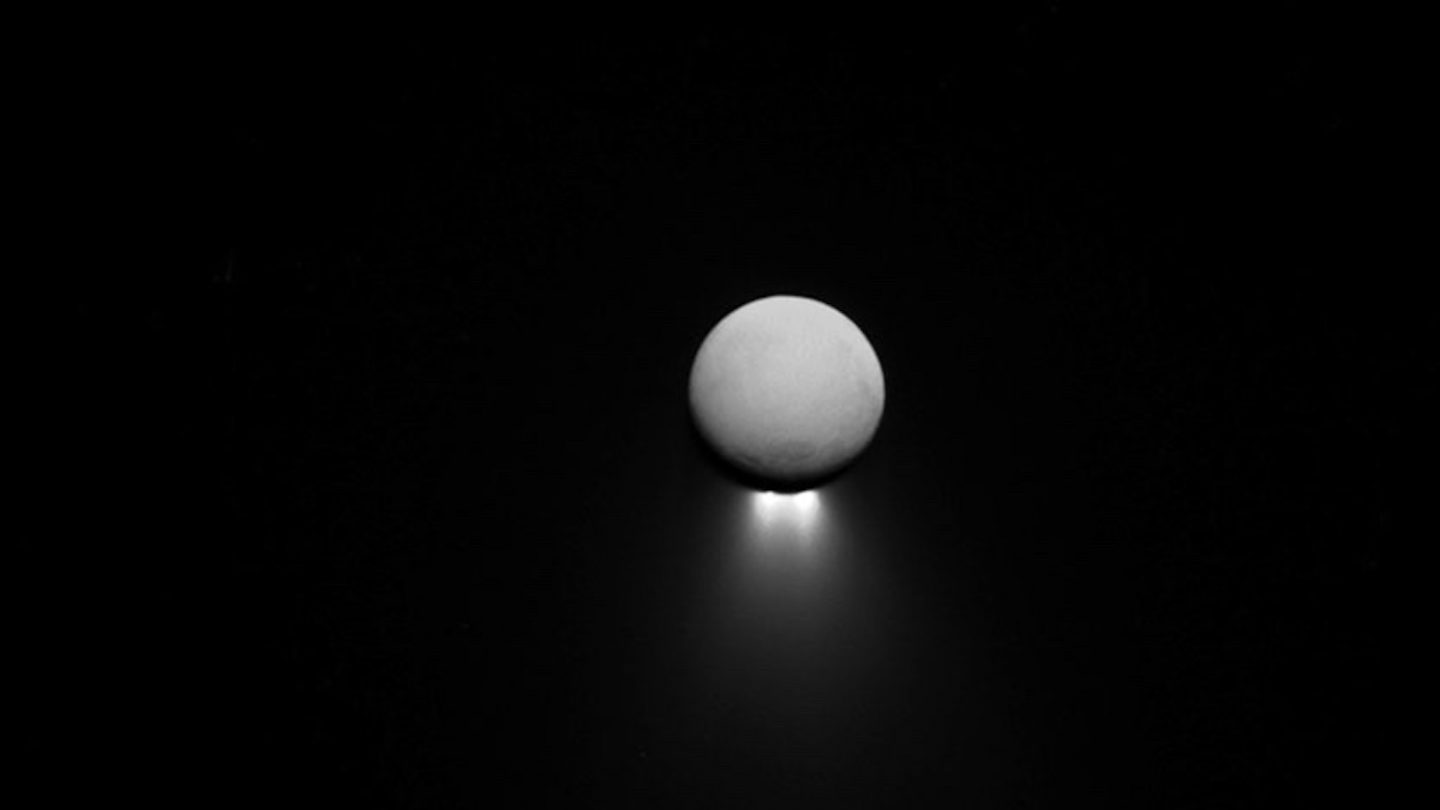 Saturn’s moon Enceladus with the Sun behind it. Credit: NASA/JPL-Caltech/Space Science Institute

Although NASA’s new Dragonfly mission to Titan will be the first return to the Saturn system to follow up on the discoveries of the Cassini mission, astrobiologists are already prepping to return to another of Saturn’s moons, Enceladus.

Enceladus is only 500 kilometres across, but it carries outsized importance in the list of places in our solar system where extraterrestrial life might be found. In a series of flybys between 2005 to 2015, Cassini discovered it to be venting geyser-like jets of water from a subsurface ocean that might be warm and nutrient-rich enough to support life.

And while neither NASA nor any other space agency plans to return to Enceladus in the near future, astrobiologists are brainstorming ways to determine if its ocean might truly be habitable, and/or currently contain life.

A preliminary issue, however, is how long this ocean might have existed, says Marc Neveu, a planetary scientist and astrobiologist at NASA’s Goddard Space Flight Centre in Greenbelt, Maryland, US.

For life to exist in it, he told last week’s AbSciCon 19 astrobiology science conference in Bellevue, Washington, there must be a source of energy for its biochemistry, and the most likely source of this is from chemicals created by reactions between the water and the moon’s hot, rocky core. Similar reactions are what fuel flourishing ecosystems surrounding hydrothermal vents deep beneath the surface of Earth’s.

But Enceladus is small, and its reservoir of such chemicals is limited. If the ocean is too old, Neveu says, the reactions creating them may have subsided, depriving organisms within it (if they exist) of an energy source. If the ocean is too young, it may not have existed long enough for life to emerge – or at least not to detectable levels – which, he notes, “is all we really care about if we are going to send a spacecraft”.

To figure out how old the ocean might be, he modelled the evolution of Enceladus over billions of years, looking to see how its interactions not only with Saturn’s enormous gravity, but also with other moons and the rings, would cause its interior to either warm or cool. “You have to account for all of that,” he says. “There’s a lot of parameters.”

Based on this, he says, Enceladus’s ocean appears to be about a billion years old. “It could be two,” he says, “[or] it could be a half billion years.” But the bottom line is that it’s neither super-old (compared to the solar system’s 4.5-billion-year history, nor super young. “So it could be ‘just right,” he says.

One of the interesting things about Enceladus is that it is jetting water directly into space, where a spacecraft carrying the right instruments can dip through the plume and take samples. Cassini did this several times, but when it was designed, nobody dreamt that worlds like Enceladus might have life, and its instruments weren’t designed as life-sign detectors.

One method that is up to the task, however, is one called capillary electrophoresis with laser-induced fluorescence detection, says Jessica Creamer, an analytical chemistry researcher at NASA’s Jet Propulsion Laboratory (JPL), Pasadena, California.

It starts by having the spacecraft dive through the plume, collecting a couple of microlitres of material. This is then melted, labelled with a fluorescent dye, and dissolved in an electrically conductive solvent. It is then passed through a 50-micron-diameter capillary tube to which a set voltage is applied.

Different chemicals flow through the tube at different rates, separating into bands that can be detected by illuminating them with a laser.

Most importantly, she says, it is capable of distinguishing organic molecules such as amino acids based on whether their geometry is “left-handed” or “right-handed.” That’s important, because abiotic processes tend to produce a 50/50 mix of the two, whereas biological ones tend to favour one or the other (left-handed for Earth organisms).

But it would also be useful to deploy one or more landers, says Steven Vance, a JPL astrobiologist. These could carry instruments like seismometers (for landers) or gravity sensors (for an orbiter) that are capable of peering beneath Enceladus’s surface to learn more about its interior ocean and the processes within it that might support life.

Whatever such a mission might find, Neveu says, it would be an important contribution to astrobiology. Perhaps, it would make history by finding evidence of life – or reveal a seemingly habitable world that is nevertheless lifeless.

The latter would be disappointing, but when it comes to shedding light on the big question of whether we are alone in the universe, he says, “I would argue is equally meaningful”.

And, while Dragonfly is the mission now under development, it’s a good reminder that Saturn has not one, but two moons capable of supporting life. “Follow the water,” NASA once said in developing its goals for searching for extraterrestrial life in the Solar System. And in the case of Saturn, that leads not only to Titan, but also to Enceladus.