Home ■ Space ■ Is there an ocean of water at Pluto’s heart? 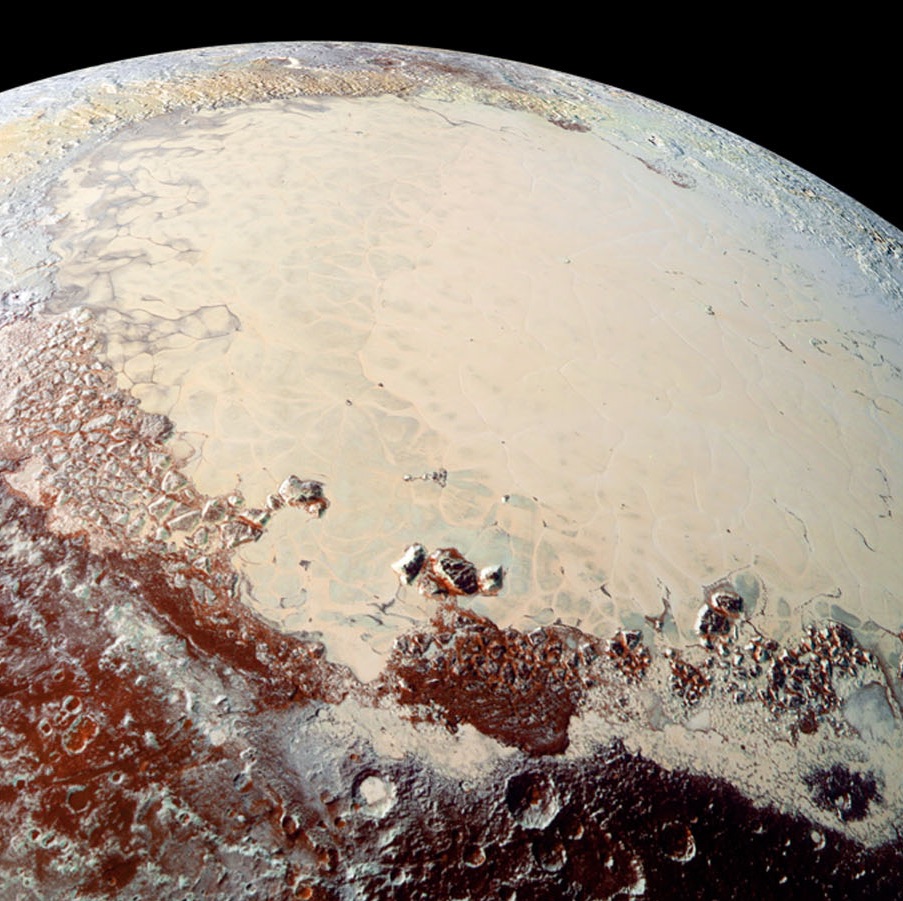 Evidence is mounting that the frozen surface of Pluto masks an ocean of water. Now a new study by Brown University scientists in the US suggests that the ocean may be more than 100 kilometres deep.

The researchers came to the conclusion after modelling by the dynamics of a giant asteroid impact to the dwarf planet’s surface in the distant past.

That left a massive crater, which is part of the prominent heart-shaped feature on the face of Pluto. The 900-kilometre-wide western side of this was informally named by NASA’s New Horizons team as Sputnik Planum.

The asteroid that created the feature is thought to have been 200 kilometres across. Usually, an asteroid that size would gouge out an enormous hole in the surface, creating an area with less mass than the average of the surface – a so-called “negative mass anomaly”.

“An impact crater is basically a hole in the ground,” says Brown geologist Brandon Johnson, who published his team’s work in Geophysical Research Letters.

“You’re taking a bunch of material and blasting it out, so you expect it to have negative mass anomaly, but that’s not what we see with Sputnik Planum.”

The western half of the heart-shaped feature was revealed in detail during the fly-by of the New Horizons spacecraft. NASA scientists believe the terrain was created no more than 100 million years ago.

Sputnik Planum sits directly on the tidal access between Pluto and its largest moon Charon – the two showing the same face to each other as they rotate.

That suggested to the Brown team that the basin has more than average mass and “that got people thinking about how you could get this positive mass anomaly”, said Johnson.

While the basin has been partially filled in by nitrogen ice, that is not enough to create the positive mass.

The scientists suspect that after the asteroid impact and its subsequent rebound, higher density material – possibly liquid water – was hauled upward from deep in Pluto’s interior, making up for the mass lost in the crater.

“This scenario requires a liquid ocean,” Johnson was quoted as saying.

“We wanted to run computer models of the impact to see if this is something that would actually happen. What we found is that the production of a positive mass anomaly is actually quite sensitive to how thick the ocean layer is. It’s also sensitive to how salty the ocean is, because the salt content affects the density of the water.”

“Thermal models of Pluto’s interior and tectonic evidence found on the surface suggest that an ocean may exist, but it’s not easy to infer its size or anything else about it,” Johnson said.

“We’ve been able to put some constraints on its thickness and get some clues about composition.”