Home ■ Space ■ How to build a space elevator 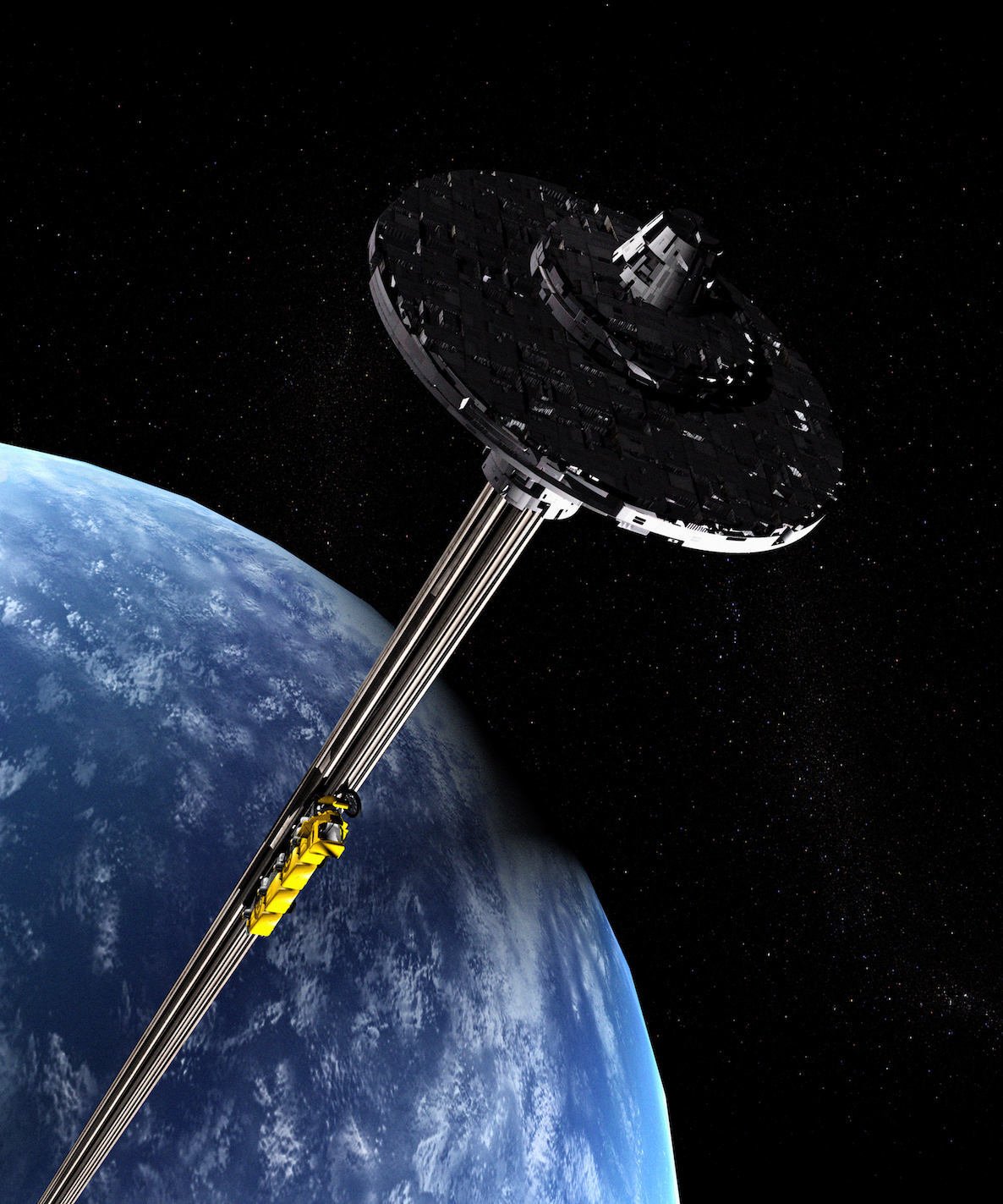 An artist impression of a space elevator, showing counterweight and, below, a capsule nearing the top. Credit: CHRISTIAN DARKIN/SCIENCE PHOTO LIBRARY/Getty Images

The idea of a space elevator has long been a staple of science fiction, and the subject of very real feasibility studies from NASA and others. The consensus, among the engineers if not the authors, is that it’s a damn good idea, but the enormous stresses and strains involved in building one cannot be met with the materials currently available.

Now, however, a mathematician and a mechanical engineer, both from Johns Hopkins University in the US, suggest that building an elevator in the very near future is perfectly possible – as long as its makers are prepared to learn from biology, tweak the risk assessments, and build some autonomous repair-bots.

In a paper on the pre-print site Arxiv (and thus awaiting peer review), Dan Popescu and Sean Sun model the engineering for a space elevator, basing their calculations on the ratio of maximum stress to maximum tensile strength found in biological structures such as ligaments and tendons. This is considerably higher than the stress-to-strength ratio used in engineering, in which the ability of the materials used to absorb force is at least double the destructive power of the force itself.

Such a ratio is fine for normal civil engineering projects, say the authors, but “in the case of megastructures [is] both too stringent and unable to adequately control the failure probability”.

And a space elevator, it must be said, is pretty much about as mega as any human-built structure ever proposed.

The point of an elevator is to provide a method to get people and cargo up beyond the Earth’s atmosphere – way beyond, in some designs – without having to use rockets. The idea was first suggested back in 1895 by Russian scientist Konstantin Tsiolkovsky.

There have been refinements to the idea since then, but the basic set-up hasn’t changed. The elevator comprises a single cable anchored at a fixed point on the globe (usually at the equator) extending upwards beyond the geostationary orbit altitude – some 35,786 kilometres.

At the top end of the cable is a counterweight. The competing forces of gravity and outwards-directed centrifugal force serve to keep the cable nice and taut, providing a line along which cabins, or cargo pods, could move swiftly up and down.

The primary problem with the idea is that the stress imposed on the massively long cable would be so enormous that nothing currently available is strong enough to withstand it.

In the past couple of decades there have been several large-scale competitions and proposals offering designs that purport to overcome this problem but none, to date, has succeeded. The most recent, in 2014, saw Google’s development arm, Google X, working on a project, but it shelved the idea after discovering that, at the time, no one had managed to build a super-strong carbon-nanotube cable longer than a metre.

(Carbon nanotubes are the great hope of space-elevator engineers, but that hope may be forlorn. A 2006 study offered modelling that predicted that at lengths of about 100,000 kilometres nanotube cables would inevitably contain sufficient defects to reduce its overall strength by around 70%.)

Popescu and Sun, in their new paper, propose a different approach. While carbon nanotubes are theoretically the natural choice for a space elevator cable, they say, the fact that at present they can’t be made longer than a few centimetres makes them unfeasible. However, they note, some composites – in which carbon nanotubes are alloyed with other materials – are weaker, but “we are fast approaching the material strength ranges necessary for stable megastructures with self-repair mechanisms”.

And the self-repair mechanisms are critical. The researchers propose a cable that is divided in two directions – upwards, into a series of stacked segments, and sideways into a series of parallel filaments. When any filament fails, as indeed it must from time to time, the impact is restricted to its own segment, and the load is immediately shared among its neighbours, until such time as the repair-bots move in and replace it.

At the base of all this modelling, Popescu and Sun suggest, is a downshifting of stress ratios, moving away from engineering standards to those routinely found in biology. Achilles’ tendons and human spines, they note, can sustain tremendous stresses very close to their tensile strengths – much greater than the stresses that engineers allow to be experienced by steel, for instance.

The main reason for this, of course, is that to an extent, at least, tendons and spines have a capacity to self-repair, a quality notably lacking in steel girders. Adding this capability to a space-elevator design, the researchers suggest, means that there would no longer be a need to wait for materials science to catch up with imagination.

“We suggest a megastructure design that not only allows components to fail, but has a self-repair mechanism to replace the broken components,” they write.

“This will allow structures to operate at significantly higher loads, without compromising their integrity, which, in turn, will make megastructures built from existing materials a reality.”