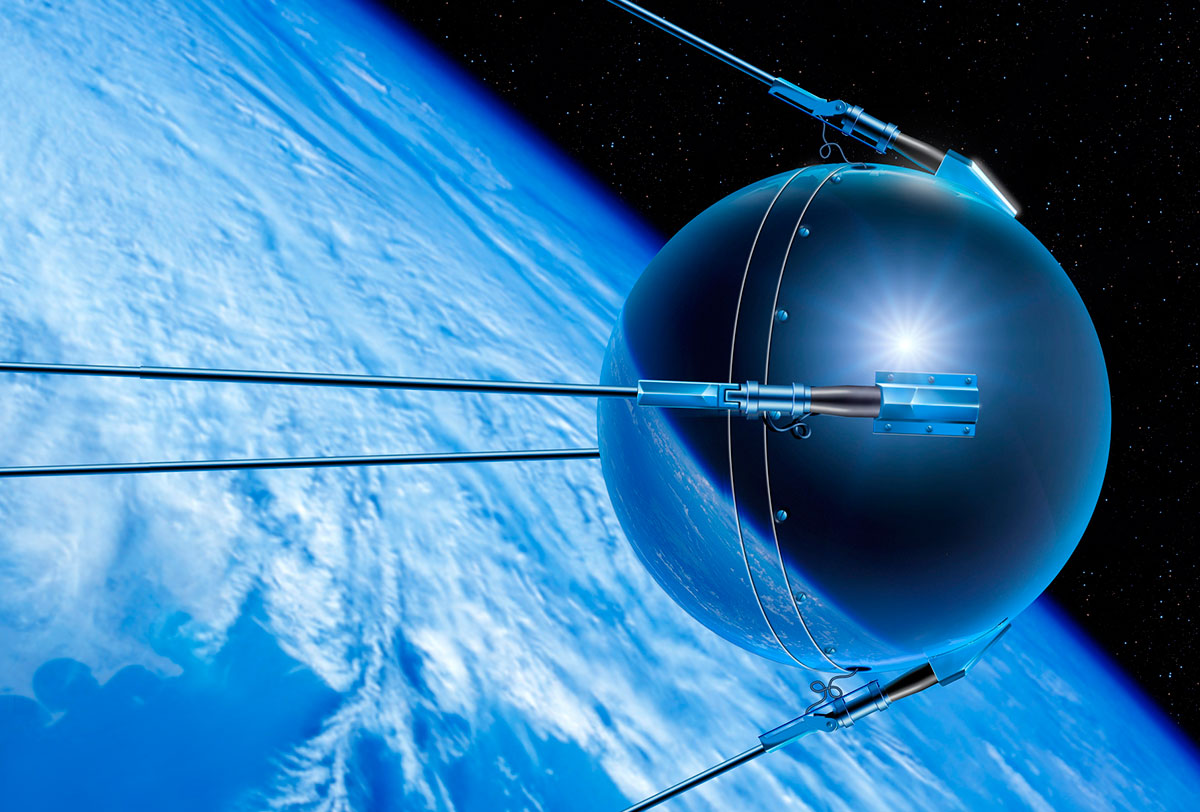 Radio beeps from a highly polished aluminium-alloy sphere barely bigger than a beachball signalled to the world, on the evening of 4 October, 1957 (GMT), that humanity had crossed a monumental threshold. We had entered the space age.

In successfully launching and placing Sputnik 1 into a low elliptical orbit, the Soviet Union took first honours in the space race. This was the stage-setting opening chapter in a saga in which scientists and their nations reached for the stars while simultaneously fearing that enemy rockets might fall upon them.

Sputnik 1 was evocatively described as the world’s first artificial moon in news reports at the time, but it was a very small one; its diameter was slightly less than the length of two standard school rulers – about 58 cm, or 23 inches – and it weighed less than a family refrigerator of the time – 83.6 kg, or 184 pounds. Its full name was ‘Prosteyshiy Sputnik-1’, meaning ‘Elementary Satellite 1’. Sputnik (‘спутник’ in Russian) also means ‘travelling companion’.

Most of the weight of the internal componentry came from three silver-zinc batteries. One powered a small ventilator fan, the others two simple radio transmitters. These 1-watt transmitters were connected to two pairs of trailing antennae – one pair 2.4 metres long, the other 2.9 metres long, designed – for broadcasting two different frequencies. The paired configuration was angled to ensure Sputnik’s broadcast signals would be heard on the ground no matter which way the satellite was orientated.

The hemisphere to which the antennae were attached had an additional external covering to help regulate the internal temperature. The two halves were hermetically sealed together and the satellite interior was pressurised to 1.3 atmospheres using nitrogen gas. The ventilator fan was designed to kick whenever the internal temperature rose to more than 30 degrees C, circulating the gas into the outer shell where it could cool.

The aluminium alloy shell was strengthened with magnesium and titanium. It was highly polished so Sputnik would better reflect sunlight, enabling it to be more easily seen in the sky – particularly when it was over the United States.

Sputnik’s 1 greatest achievement was actually getting into space. It did this atop a rocket whose design was derived from the Soviet Union’s development of the world’s first intercontinental ballistic missile – the R-7 ‘Semyorka’. The two-stage rocket had a core 28-metre-long fuselage with four strap-on boosters. The boosters, powered by a mix of of liquid oxygen and kerosene, provided the initial lift, burning through about 160 tons of fuel in 120 seconds. The second-stage core rocket, carrying a little more than 86 tonnes of fuel, had a burn time of 300 seconds. The rocket launched at 10:29 pm Moscow time from a secret site now known as the Baikonur Cosmodrome in Kazakhstan. It entered orbit 295 seconds after lift-off, with the satellite separating about 20 seconds later.

Soviet authorities announced the success of Sputnik 1 several hours after its launch. The Soviet news agency Tass also released the radio frequencies on which the satellite was transmitting – 20.005 MHz and 40.01 MHz – along with broadcast timetables to enable radio enthusiasts around the world to tune in and marvel at its beep-beep-beeping. The photograph below shows technicians at a radio control post near Moscow monitoring the Sputnik signals.

Information about Sputnik 1’s transmission frequencies had, in fact, been published months earlier, in the June 1957 issue of the Russian magazine Pадио (Radio). This was to ready Russian radio amateurs to monitor the satellite once it was launched. Following editions carried yet more details. “If we Americans had been reading Radio as carefully as the Russians were,” noted a top-secret US intelligence report only declassified by the NSA in 2008, “we might have been better prepare to receive Sputnik’s signals when it was launched a few months later.”

For the most part, though, the news of Sputnik hit the United States, and elsewhere, like a bombshell.

While the successful launch and placement of Sputnik 1 into low elliptical orbit was heralded as a scientific triumph, it also excited fears of a dangerous new era in the Cold War stand-off between the Soviet Union and the United States. American commentators warned of the prospect of enemy attacks raining down from space. Future US president Lyndon Johnson fumed that the Russians could one day be “dropping bombs on us from space like kids dropping rocks onto cars from freeway overpasses”. Physicist Edward Teller, the ‘father of the hydrogen bomb’, described the event as “a greater defeat for our country than Pearl Harbour”.

“Launching of the satellite was a tremendous victory for science,” noted a United Press report breaking news of Sputnik 1 the next day. “It was a more tremendous victory for Soviet propaganda to be able to trumpet to the world the Russians were the first to break through the frontiers of space.” Sputnik would indeed go on to feature prominently in posters, stamps, sculptures and monuments to the ideological superiority of the communist system. The illustrated postcard below celebrated the launch of both Sputnik I and Sputnik II, which on 3 November 1957 carried Soviet space dog into Laika into space. It helped that 1957 was the 40th anniversary of the Russian Revolution.

Sputnik 1 transmitted for 21 days, until its batteries were depleted. It remained in space for 96 days, before it finally burnt up on re-entry into the Earth’s atmosphere, on 4 January, 1958.