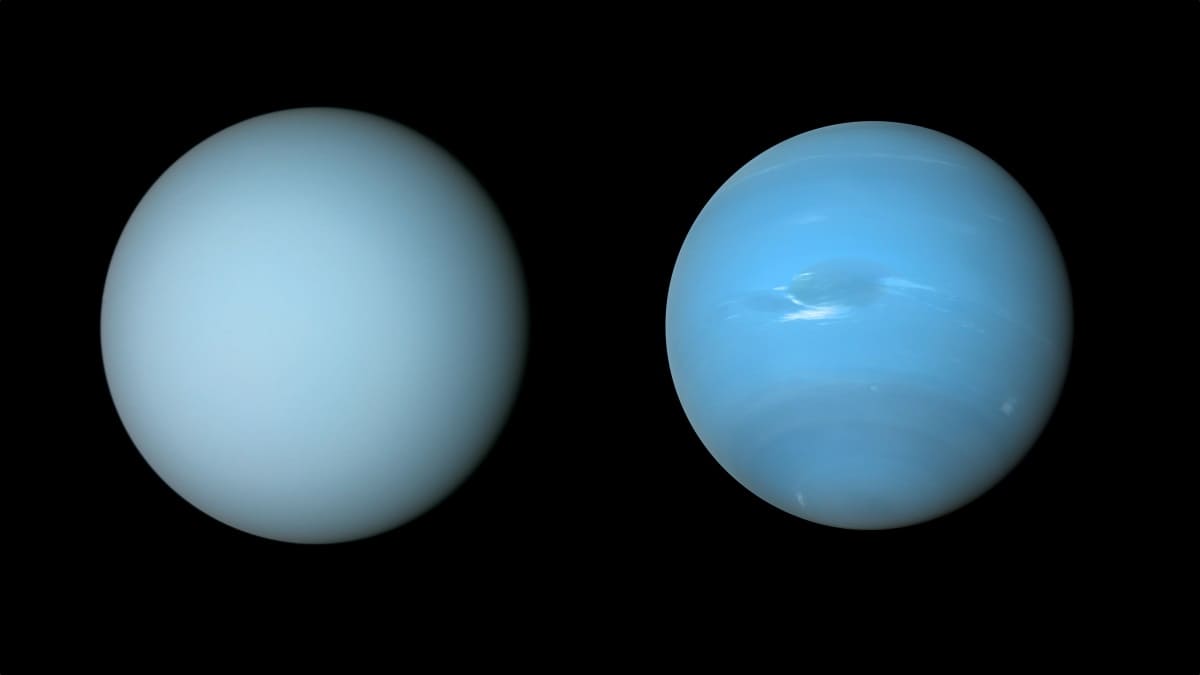 NASA’s Voyager 2 spacecraft captured these views of Uranus (on the left) and Neptune (on the right) during its flybys of the planets in the 1980s. Credit: NASA/JPL-Caltech/B. Jónsson.
More on:
astronomy

Neptune and Uranus are the two outermost planets in our Solar System (sorry, Pluto groupies). Apart from sharing the outer reaches of the Sun’s backyard, these two planets share many characteristics. In fact, they’re virtually identical. Except in one very obvious way.

So, why are they different colours?

Researchers have finally developed a single atmospheric model that matches observations of both planets, answering this question. Their results are published in the Journal of Geophysical Research: Planets.

The data used to inform the model were taken at the Gemini North telescope, the NASA Infrared Telescope Facility and the Hubble Space Telescope.

Neptune has a distinct blue hue, while Uranus is a much paler shade of cyan. The team found that the ‘whitening’ of Uranus compared to Neptune is due to a layer of concentrated haze, which is thicker on Uranus. The haze builds up on Uranus’s more sluggish atmosphere.

The researchers suggest that, were this haze equally present on both planets, they would appear equally blue.

A NASA press release notes that the blueness of the planets’ atmospheres is due to the scattering and subsequent absorption of red photons from the Sun by the methane molecules in their atmospheres.

Led by Patrick Irwin, physics professor at Oxford University, the team’s model describes aerosol layers in Neptunian and Uranian atmospheres. While previous studies focused on specific wavelengths, this one matches observations from both planets across multiple wavelengths. The new model also proposes haze at deeper layers, previously thought to only contain clouds of methane and hydrogen sulphide ice.

“This is the first model to simultaneously fit observations of reflected sunlight from ultraviolet to near-infrared wavelengths,” explains Irwin. “It’s also the first to explain the difference in visible colour between Uranus and Neptune.”

The model consists of three layers of aerosols. The colour difference is caused in the middle layer, which is thicker on Uranus than Neptune. The team argues that on both planets methane ice condenses onto the haze particles in this layer, causing a shower of methane snow.

Because of Neptune’s more active, turbulent atmosphere, it is able to produce more snow and remove more of the haze. Thus, Neptune’s haze layer is thinner and its blueness less obstructed.

“We hoped that developing this model would help us understand clouds and hazes in the ice giant atmospheres,” says Mike Wong, co-author and astronomer at the University of California, Berkeley. “Explaining the difference in colour between Uranus and Neptune was an unexpected bonus!”

The team believes its model also helps explain why dark spots are more commonly visible on Neptune. Darkening the deepest layer in its model, the team is able to produce dark spots similar to those seen on both planets, and explain why they are less frequently detected on Uranus.

Irwin’s team analysed data from the Near-Infrared Integral Field Sepctrometer (NIFS) instrument on the Gemini North telescope, near the summit of Mauna Kea in Hawai‘I, part of the international Gemini Observatory, and archival NASA observations from the organisation’s Infrared Telescope Facility and the Hubble Space Telescope. The observations spanned ultraviolet, visible and near-infrared wavelengths of light.

Of particular importance to the study was the NIFS. Able to provide detailed measurements of the planets’ atmospheric reflectivity, the instrument gave a spectrum of brightness at different wavelengths. “The Gemini observatories continue to deliver new insights into the nature of our planetary neighbours,” said Martin Still, Gemini Program Officer at the National Science Foundation. “In this experiment, Gemini North provided a component within a suite of ground- and space-based facilities critical to the detection and characterisation of atmospheric hazes.”