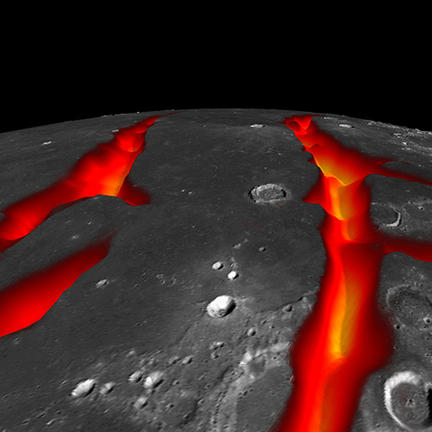 Don’t be fooled by its calm, grey face. The Moon led a hot, wild youth with magma lakes bubbling on its surface and jets of lava erupting through its crust. What could have driven these fireworks? Carbon monoxide gas.

The findings are a triumph for ultrasensitive sleuthing. “Astronomy’s a bit like detective work,” says University of Southern Queensland astronomer Jonti Horner. “They’ve uncovered clues to give a very realistic answer to the mystery of volcanism on the Moon.”

Most astronomers believe the Moon calved off the side of the Earth around 4.5 billion years ago. Its violent birth was the result of a collision between Earth and a Mars-sized rock that then ricocheted off into space. The newborn eventually coalesced from the red-hot mass of gas, dust and rock.

Along with volcanoes, the volatile young Moon housed “fire fountains”, geyser-like jets of lava propelled skyward by hot gases in the magma. Deep below the surface, crushing pressures keep these gases dissolved within the molten rock – like the carbon dioxide trapped in a sealed bottle of champagne. But as the churning magma rises, the gases escape until – like a shaken champagne bottle with the cork released – they burst through the surface, launching the lava skywards.

“They’ve uncovered clues to give a very realistic answer to the mystery of volcanism on the Moon.”

On Earth, fire fountains can still be seen on Hawaii. But as the Moon cooled, its fire fountains sputtered out. “Moon gravity is one sixth that on Earth and has no atmosphere,” explains Saal. While Earth has kept hold of its volatile gases, the gases that once drove lunar fire fountains were lost into space – their identity unknown until now.

Remnants of the Moon’s fire fountains can be found on its surface – flecks of magma that cooled into tiny beads of glassy rock less than a millimetre in diameter. Many of these beads have lain undisturbed for billions of years, with ancient lunar gases trapped inside the glass seal.

Apollo astronauts brought some of these beads back to Earth in the early 1970s. When geochemists melted some to study their secrets, they concluded the Moon contained 100 to 1,000 times fewer volatile materials than Earth. They reasoned these volatiles were lost to space during the collision that created the Moon in the first place.

These statistics remained in textbooks for nearly 40 years. Then in 2005 Saal decided to double-check them using the latest analytical instruments. Getting samples of the precious glass beads was not easy. After he submitted three proposals to NASA over three years, they finally relinquished a small sample. “They probably sensed I was very stubborn”, he says.

Using the latest ultra-sensitive versions of analytical instruments known as mass spectrometers, Saal and his team discovered the Moon beads contained water, sulfur, chlorine and fluorine at the same concentrations as volcanic beads found on Earth.

The finding added support for the Moon’s Earthly origins. But one question remained – what gas drove the lunar fire fountains that formed the glass beads?

Hawaii’s fire fountains are largely propelled by carbon dioxide, from carbon and oxygen reacting in the magma. Saal realised that on the Moon, the different pressures at play favour carbon monoxide formation instead. Calculations by the team suggested as little as 50 parts per million of carbon, mixed with the plentiful oxygen in the rock, could do the trick. But measuring such minute amounts of carbon was beyond the abilities of even their sensitive instruments.

So Saal teamed up with Carnegie Institute for Science specialist Erik Hauri – who he describes as a spectroscopy “guru” – to develop a new technique to measure these minute carbon traces.

When the glass beads were measure for the first time they were embedded in a resin to hold them steady inside the instrument – but these resins contained carbon, some of which could seep out and skew the results. Hauri replaced the resin with the soft metal indium, which contains no carbon. Using this technique, the researchers measured carbon concentrations of 44 to 64 parts per million, confirming carbon monoxide once powered the fountains of lava on the Moon.

The measurement closely matches the carbon concentration of equivalent rock of the same age found on Earth (20 to 70 parts per million) – yet more evidence the Moon is a chipped off chunk of Earth.

So the Moon’s delicate glass beads have given up yet more of the secrets of its youth. “The beauty of todays’ technology is getting the composition of what we’re looking at to a very fine art,” Horner says.