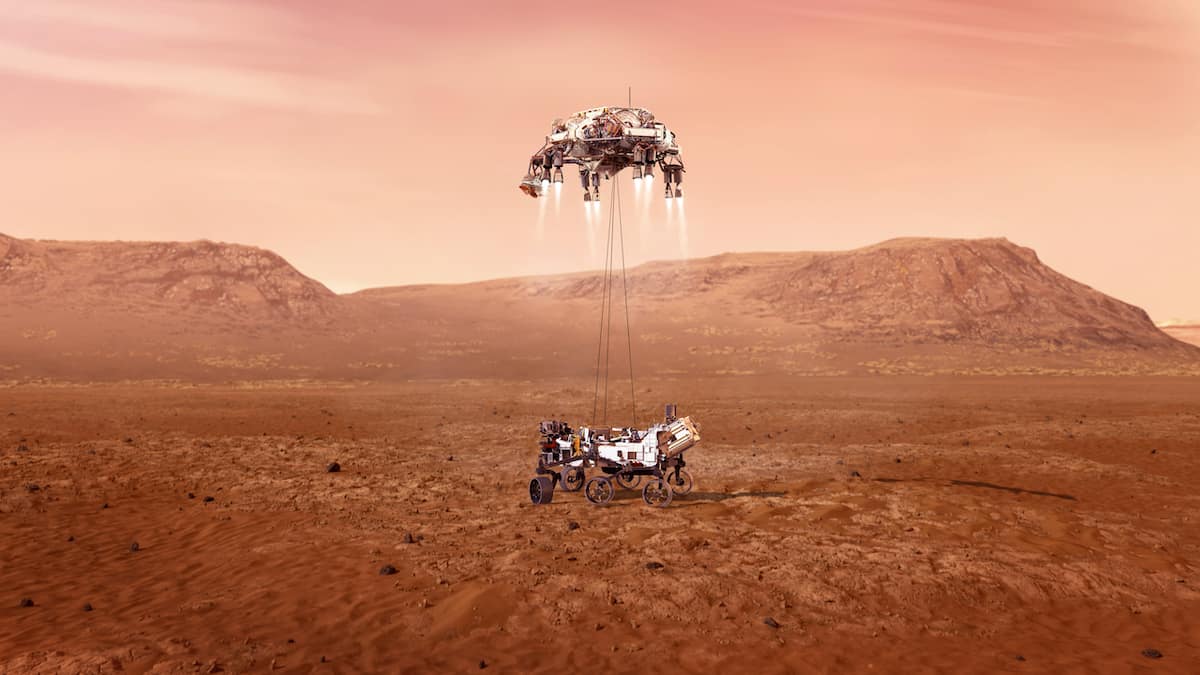 NASA’s perseverance rover- It started with the type of chatter you might hear from someone setting up a complex sound system.

Lots of names (not actually named Smith and Jones). Calm, measured voices from NASA’s Jet Propulsion Laboratory in Pasadena, California, plus others chiming in by laptop and phone from around the world.

But the calm overlaid an underlying tension.

Because even before the sound checks, there’s also been another bit of control room chatter.

NASA’s Perseverance rover was no longer on its way to Mars. It was about to land. Intact or in pieces, nobody knew for sure, but it was coming down one way or another.

And come down it did, landing safely at 7:56 am AEDT, about as close to perfectly on target as anyone could dream of, immediately beaming back a signal telling the world it was safe, followed by a grainy photo of its surroundings.

“Take that Jezero [Crater]!” someone cheered among the explosion of applause.

Perseverance, which is designed to search for signs of ancient life on Mars and to collect samples for later return to Earth, is the final and most ambitious of an international flotilla of spacecraft to reach Mars in the last 10 days.

The first was a mission from the United Arab Emirates named Hope, which arrived on 9 February. Next up was Tiawen-1 from China, on 15 February. And now Perseverance.

“I think it’s wonderful that we’re seeing more than one nation taking advantage of this launch window,” says Jerry Oltion, a space fan and award-winning science fiction author from Oregon, US. “Having multiple nations involved takes Solar System exploration out of the political realm and puts it squarely in the realm of international science, where it belongs.”

Hope and Tiawen-1 are orbiters (although Tiawen-1 contains a detachable lander that is expected to make its descent in a few months).

Perseverance is a lander, pure and simple. As such, it took a riskier and more direct approach, bypassing any orbital stop-over to plunge straight from interplanetary space to the surface in a braking manoeuvre that project managers dubbed “seven minutes of terror”.

“This is one of the most difficult manoeuvres we do in the space business,” Matt Wallace, the rover team’s deputy project manager, said the day before the landing. “[We] approach at 12,000 miles per hour [19,300 km/h[ and have to slow to 2 miles per hour [3 km/h] in about seven minutes.”

And there was definite reason not to be too confident of its success. “Almost fifty percent of the spacecraft that have attempted to land on Mars fail,” Wallace said.

Going in, however, Perseverance had two things in its favour. First, the flight engineers had done a spectacular job of lining it up for its targeted landing site—so good that even though there were opportunities for late course adjustments, there was no reason to make them.

“That’s pretty incredible, since our last manoeuvre was in December,” says Al Chen, head of the Entry, Descent, and Landing (EDL) team.

Also in its favour was the weather, which had clouds and storms near the north polar ice cap, but nothing threatening close to the landing site, only 18 degrees north of the equator.

Much more frightening was the landing zone itself, in a 45-kilometre-wide crater called Jezero.

Jezero was picked because billions of years ago an ancient river spilled into it creating a delta and lake bed that might contain relics of ancient life, washed down from the surrounding highlands. But it wasn’t the easiest place to land.

“The scientists see the geologic diversity and biosignature potential,” says Erisa Stilley, EDL systems engineer. “EDL sees a hazard map. We ask what could kill us on landing.”

And the answers, she says, were numerous. On one side were rocks. On another were sand dunes. And the edge of the delta, which the scientists most want to explore? To her team, she says, “that looks like a 250-meter cliff.”

To avoid landing on something deadly, the navigation team used high-resolution images taken form orbit to construct a hazard map. “This is the best hazard map ever made,” Stilley says.

Based on this, Perseverance used a computer algorithm called TRN (Terrain Relative Navigation) in order to guide its final descent.

It’s akin to what was used last October by NASA’s OSIRIS-REx mission to successfully touch down on the asteroid Bennu to collect a sample for eventual return to Earth. But on Mars the hazards are different, says Andrew Johnson, who led its development.

OSIRIS-REx was descending very slowly in microgravity, he says, and had the option to bail out at any time and try again. Nor did it need to make large manoeuvres in order to avoid hazards in its tiny landing zone. Perseverance, on the other hand, was coming down very quickly and having to make decisions in a hurry. It also had to be prepared to make fairly large changes in position in order to find the safest possible landing zone.

The final touchdown in Jezero’s rugged terrain, however, was merely the end of the seven minutes of terror. It began higher up, when the spacecraft hit the atmosphere at meteoric speed, probably blazing across the Martian sky like a giant fireball, if anyone had been there to see it.

At peak, NASA later reported, it hit a maximum deceleration of approximately 10 times the force of Earth’s gravity.

Once this had slowed it to about 1,600 km/h it then opened a parachute about 20–30 m wide —a chute that had to deploy perfectly in a mere .6 seconds.

In a quick succession of manoeuvres, it then dropped the chute, and, dangling from a cable below a set of rocket engines, was lowered gently to the ground in what NASA calls a sky crane manoeuvre. Once the rover was down, the cable was cut and the sky crane throttled up its engines, using its remaining fuel to fly away to a safe distance, so it wouldn’t wreck everything by falling on the rover.

“It’s something like a controlled disassembly of the spacecraft,” says Wallace.

Where in this process were nails most strongly bitten? That depends on who you ask.

Stilley cited the parachute, which had to come out with a giant snap, and sustain a pull of 27,000 kilograms.

Science fiction writer Oltion worried about the sky crane manoeuvre. “Hovering with a rocket is like balancing a knife on its point,” he says. “The slightest imbalance and it’ll go zooming off in a death spiral.”

Chen views each step in the landing process almost like as one of his children, but when asked which is his “least favourite” child, he said it’s the overall complexity of the procedure, in which everything has to happen correctly, automatically, and in the right sequence.

Otherwise, rather than being safely down and happily beeping back confirmation that it was alive and healthy, Perseverance might well have found itself in pieces at the bottom of a new crater of its own making.

“Our job is to think of all the bad things that can happen,” said Jennifer Trosper, the project’s deputy project manager. “When all good things happen it’s like being in a dream.”

Originally published by Cosmos as Perseverance pays off