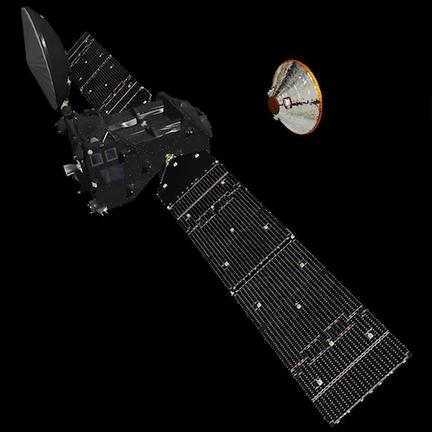 In less than a week, the joint European-Russian ExoMars mission will blast off from the cosmodrome in Kazakhstan. Scientists say it will give the best chance yet of determining if there has ever been life on Mars.

The ExoMars robot is designed to literally sniff out signs of life, when its sensitive detectors search for signs of methane and other trace gases in the atmosphere of the Red Planet. The areas identified with high concentrations of gas may hold the best chance of holding life and will be the target of future missions.

Most of the methane in Earth’s atmosphere is produced by micro-organisms and the assumption is that if the gas is present in Mars' atmosphere, it would be strong evidence of current or past life there.

The Trace Gas Orbiter will use highly sensitive spectrometers, which can detect methane and other gases in concentrations as low as a few parts in a trillion.

It will focus on hydrocarbons and sulfur species, such as sulfur dioxide that could suggest volcanic activity. The probe will search for the gases at all levels of the Martian atmosphere as well as looking directly down to the planet's surface to look for methane hot spots there.

"The first scientific goal will be to detect a broad suite of atmospheric trace gases, and key isotopologues (molecules that have at least one atom with a different number of neutrons than the parent molecules), to establish the atmospheric inventory," the ESA writes.

It will also map the deuterium/hydrogen ratio, to provide new information on water reservoirs and how it has escaped through the atmosphere.

A third goal is characterising the state of the atmosphere – temperatures, aerosols, water vapour, and ozone.

"The data assimilation technique adopted by the science team will allow them to model the atmospheric circulation," the ESA says.

"This will help determine whether particular gases are emanating from specific areas on Mars and to provide insights into the nature of the trace gas source."

NOMAD – Nadir and Occultation for MArs Discovery
NOMAD combines three spectrometers, two infrared and one ultraviolet, to perform high-sensitivity orbital identification of atmospheric components, including methane and many other species, via both solar occultation and direct reflected-light nadir observations.

ACS– Atmospheric Chemistry Suite
This suite of three infrared instruments will help scientists to investigate the chemistry and structure of the Martian atmosphere. ACS will complement NOMAD by extending the coverage at infrared wavelengths, and by taking images of the Sun to better analyse the solar occultation data.

CaSSIS – Colour and Stereo Surface Imaging System
A high-resolution camera (5 metres per pixel) capable of obtaining colour and stereo images over a wide swathe. CaSSIS will provide the geological and dynamical context for sources or sinks of trace gases detected by NOMAD and ACS.

FREND – Fine Resolution Epithermal Neutron Detector
This neutron detector will map hydrogen on the surface down to a metre deep, revealing deposits of water-ice near the surface. FREND’s mapping of shallow subsurface water ice will be up to 10 times better than existing measurements.

The module is named after Giovanni Schiaparelli, the Italian astronomer best known for his study of Mars, which he mapped, giving names to many of its features.

It also carries a small science payload to study the environment. However, its main function is to send feedback from its descent and provide details of its landing on the surface in preparation for a later landing of an ESA rover there.

The lander will carry a range of scientific equipment (above), including DREAMS (Dust Characterisation, Risk Assessment, and Environment Analyser on the Martian Surface) consists of a suite of sensors to measure the local wind speed and direction (MetWind), humidity (DREAMS-H), pressure (DREAMS-P), atmospheric temperature close to the surface (MarsTem), the transparency of the atmosphere (Solar Irradiance Sensor, SIS), and atmospheric electric fields (Atmospheric Radiation and Electricity Sensor; MicroARES) at Mars.