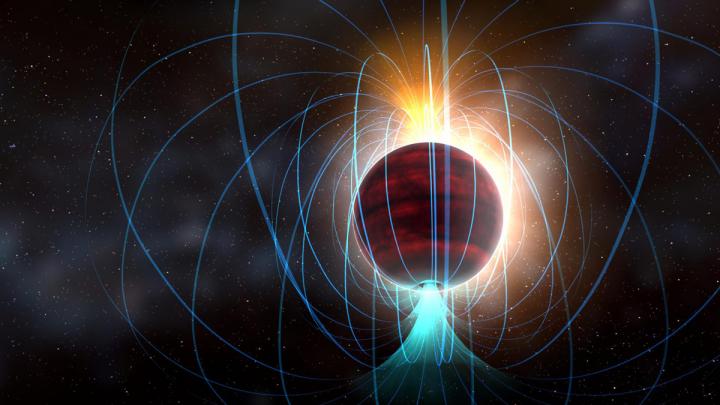 Astronomers have been surprised by the power of a magnetic field generated by a dim, cool red dwarf star located about 35 light-years from Earth in the constellation Boötes.

The dwarf’s magnetic field is several hundred times stronger than the Sun’s on average.

“If we lived around a star like this one, we wouldn’t have any satellite communications,” says Peter Williams of the Harvard-Smithsonian Center for Astrophysics (CfA) in Cambridge, Massachusetts. In fact, it might be extremely difficult for life to evolve at all in such a stormy environment,”

Williams lead author of a study based on observations of the star using the Atacama Large Millimetre/submillimetre Array (ALMA).

The star’s extraordinary magnetic field is potentially associated with a constant flurry of solar-flare-like eruptions. As with our Sun, these flares would trace tightly wound magnetic field lines that act like cosmic particle accelerators that warp the path of electrons and cause them to emit radio signals that can be detected with ALMA.

The dwarf star, TVLM 513-46546, is only 10% the mass of the Sun and spins rapidly, completing a full rotation about every two hours. By contrast, the Sun takes about 25 days to rotate once at its equator.

This puzzled astronomers because the physical processes that generate the Sun’s magnetic field shouldn’t operate in such a small star. The astronomers plan to study similar stars to determine whether TVLM 513-46546 is an oddity or one of an entire class of stormy stars.

The study has been accepted for publication in The Astrophysical Journal.