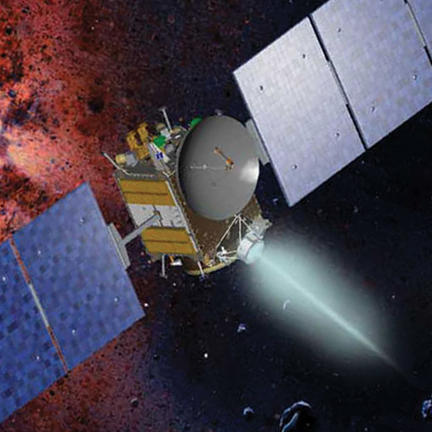 two large asteroids that have remained relatively unchanged since their formation at the dawn of our Solar System.

Sailing on the gentlest of pushes from its ion engines, NASA’s Dawn spacecraft last week completed an eight-year journey to the dwarf planet Ceres, the largest and most intriguing object in the asteroid belt.

Dawn is the first mission launched specifically to explore this region of rock and rubble between Mars and Jupiter. When the spacecraft launched in September 2007, mission scientists wanted a closer look at two asteroid belt bodies in particular: the protoplanets Ceres and Vesta, throwbacks to the early Solar System when our own planet was beginning to form.

In July 2011 Dawn reached Vesta, its first target. At 525 kilometres wide, Vesta is one of the largest asteroids in the Solar System and was revealed by Dawn to be egg-shaped with a dry and rocky surface.

An immense crater 460 kilometres wide and up to 13 kilometres deep dominates Vesta’s southern hemisphere – the remnants of a massive impact around one billion years ago. Scientists suspected Vesta was the source of a particular class of meteorite found on Earth, named howardite-eucrite-diogenite (HED) meteorites for their characteristic geological makeup. Dawn confirmed Vesta’s rocky surface was a precise match for these meteorites. A massive 6.5-million cubic kilometres of rock was ejected by this ancient impact – it accounts for nearly 5% of all the meteorites found on our own planet.

While Vesta is a misshapen rocky asteroid, Ceres looks more like a ball of ice. The dwarf planet is far too faint to be seen with the naked eye – at 950 kilometres wide it’s much smaller than our Moon and lies three times as far from the Sun than Earth. But on 1 January 1801 it was spotted by Italian monk Giuseppe Piazzi through his telescope. It was the first asteroid belt object to be seen.

By exploring Ceres we are offered a glimpse into our own planet’s infancy. In the early Solar System, planets grew by sweeping up surrounding dust and material. But around 3.9 billion years ago something stunted young Ceres’ growth and prevented it from clinging to bit and pieces. Scientists believe the intense gravity of nearby Jupiter somehow interfered with Ceres’ build-up, leaving it forever trapped as an infant.

Images taken of Ceres from Dawn at 46,000 kilometres have shown craters with mysterious bright spots that have intrigued researchers.

Last year the space-based Herschel Space Observatory saw tantalising hints of water vapour emanating from Ceres, making it the first known object in the asteroid belt to contain ice. One of the greatest mysteries in astronomy is where the water we have on Earth today came from. If Dawn confirms that Ceres has retained significant quantities of ice then it’s possible that smaller icy asteroids similar to Ceres rained down on the young Earth, filling our first oceans with their water.

Dawn is impressive not only because of its far-flung destination but also the means by which it got there. Dawn uses xenon ion engines (which are familiar to Star Wars fans as the twin ion engine, or TIE fighter) that eject tiny quantities of charged xenon atoms, known as a plasma, out of the back of the craft to create thrust.

Dawn is equipped with three ion propulsion engines, which each produce around 91 millinewtons of thrust – the same force needed to hold up a sheet of A4 paper against Earth’s gravity. This tiny propulsion system might not seem much but in the near-vacuum of space there is no air resistance to stop the craft slowly gathering speed. Ultimately the tiny ion engines will have propelled Dawn to a similar overall velocity change as the enormous Delta II rocket that gave it its initial boost into space, but far more efficiently.

It’s not all been plain sailing for Dawn. A cosmic ray slammed into the craft’s electronics on 11 September last year, stopping the engine and threatening to throw the original flight path into chaos. By 15 September, the team had one of Dawn’s backup engines up and running and the spacecraft was able to continue on its way with minimal disruption.

As efficient as the ion engines are, there’s not enough fuel left on Dawn for the spacecraft to return to Earth. After it finishes its detailed scans Dawn will eventually end up a silent “moon” to the newly explored dwarf planet.