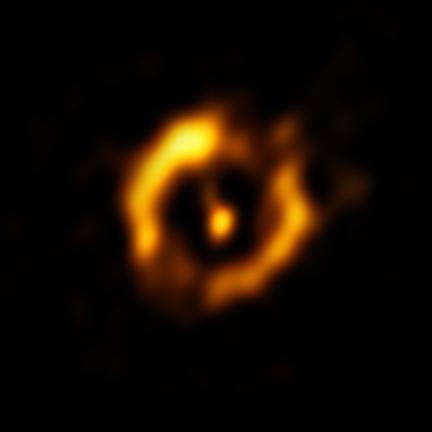 The discs of dust and gas that form around ancient stars may give birth to a new generation of planets, astronomers suggest after getting their sharpest-ever view of the phenomenon.

The target of the Very Large Telescope Interferometer at ESO’s Paranal Observatory in Chile target was an old double star – IRAS 08544-4431 – about 4,000 light-years from Earth in the southern constellation of Vela (The Sails).

The system consists of a red giant star, which expelled the material in the surrounding dusty disc, and a less-evolved star orbiting close by.

A team of astronomers led by Michel Hillen and Hans Van Winckel from the Instituut voor Sterrenkunde in Leuven, Belgium, were struck by how similar the disc of material surround the doubles star system appeared to those that form around young stars.

In the case of the old stars, the material is ejected from by stellar winds as the star passes through its red giant stage.

The discs around young stars are fairly well understood, as there are a relatively large number of young stars close enough to us to be studied. But this new sharp view of the anciuent system gives astronomers the opportunity for the first time to compare a disc formed at the beginning and the end of the stellar life cycle.

The imaging was made possible by a new technique that removes the central stars from the image to reveal what lies around them.

The most prominent feature of the image is the ring, which formed as the scientists expected – the closer to the stars, the dust would evaporate in the fierce radiation.

"We were also surprised to find a fainter glow that is probably coming from a small accretion disc around the companion star," Hillen said.

"We knew the star was double, but weren’t expecting to see the companion directly. It is really thanks to the jump in performance now provided by the new detector … that we are able to view the very inner regions of this distant system."

While the discs around old stars are similar to the planet-forming ones around young stars, it is still not clear that the dust and gases from old stars can lead to the birth of a second crop of planets.

"Our observations and modelling open a new window to study the physics of these discs, as well as stellar evolution in double stars. For the first time the complex interactions between close binary systems and their dusty environments can now be resolved in space and time," Van Winckel said.