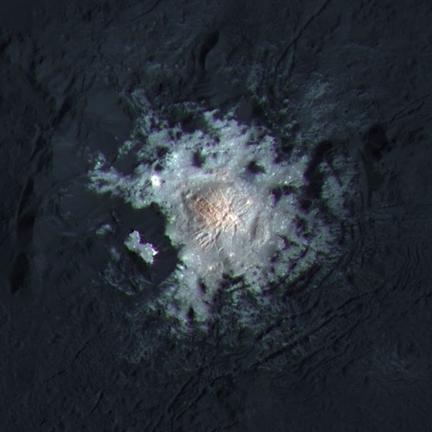 The latest view of dwarf planet Ceres takes us closer than ever before to the bottom of Occator Crater, the site of the brightest of the mysterious spots that have scientists puzzled.

The images were released by NASA's Dawn spacecraft mission at the 47th annual Lunar and Planetary Science Conference in Texas.

"Before Dawn began its intensive observations of Ceres last year, Occator Crater looked to be one large bright area. Now, with the latest close views, we can see complex features that provide new mysteries to investigate," said Ralf Jaumann, planetary scientist and Dawn co-investigator at the German Aerospace Centre in Berlin.

"The intricate geometry of the crater interior suggests geologic activity in the recent past, but we will need to complete detailed geologic mapping of the crater in order to test hypotheses for its formation."

The team also released an enhanced colour map of the surface of Ceres, highlighting the diversity of materials found there and the planet's relatively smooth surface, which does not have as many large impact basins as scientists expected.

The blue material highlighted in the colour map is related to flows, smooth plains and mountains, which appear to be very young surface features.

"Although impact processes dominate the surface geology on Ceres, we have identified specific color variations on the surface indicating material alterations that are due to a complex interaction of the impact process and the subsurface composition," Jaumann said.

"Additionally, this gives evidence for a subsurface layer enriched in ice and volatiles."

Neutrons and gamma rays produced by cosmic ray interactions with surface materials provide a fingerprint of Ceres’ chemical make-up in the metre of the regolith – the planet's "topsoil".

GRaND detected fewer neutrons near the poles of Ceres than at the equator, indicating a higher concentration of hydrogen at higher latitudes, perhaps due to water ice near the surface in polar regions.

"Our analyses will test a longstanding prediction that water ice can survive just beneath Ceres' cold, high-latitude surface for billions of years," said Tom Prettyman, the lead for GRaND and Dawn co-investigator at the Planetary Science Institute, Tucson, Arizona.

Scientists have been struck by the differences in subsurface at different point across Ceres, as observed by the visible and infrared mapping spectrometer (VIR).

In the irregularly shaped Haulani Crater, in particular, they found a different proportion of surface materials than its surroundings.

"False-colour images of Haulani show that material excavated by an impact is different than the general surface composition of Ceres. The diversity of materials implies either that there is a mixed layer underneath, or that the impact itself changed the properties of the materials," said Maria Cristina de Sanctis, the VIR instrument lead scientist, based at the National Institute of Astrophysics, Rome.

The VIR instrument has detected water at the young, nine-kilometre-wide Oxo Crater in Ceres' northern hemisphere. This water could be bound up in minerals or in the form of ice. It is the only place on Ceres where water has been detected at the surface so far.