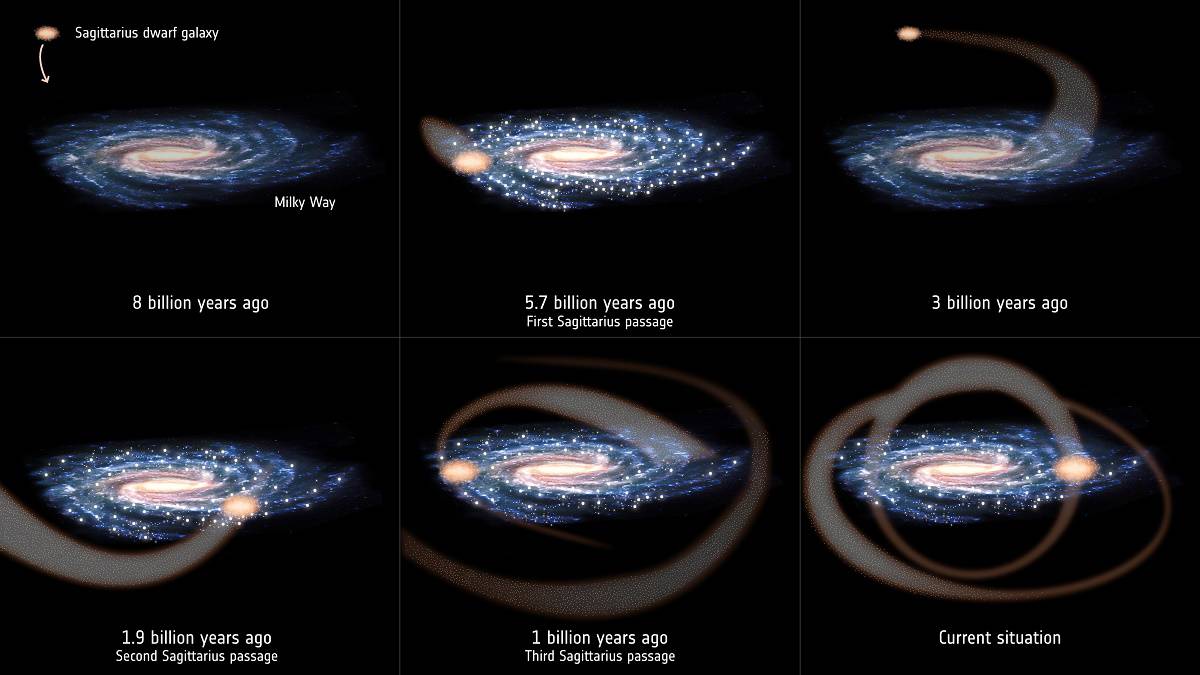 An illustration of the subsequent passages of the Sagittarius dwarf galaxy as it orbits our Milky Way galaxy, and its impact on the Milky Way’s star formation activity. Credit: ESA
More on:
Milky Way

New stars are likely to have been born in the Milky Way as a result of recurrent encounters with the Sagittarius dwarf galaxy, astronomers suggest in a paper in the journal Nature Astronomy.

Analysis of the age of nearby stars indicates that they formed in bursts shortly after a close approach of Sagittarius on at least three separate occasions, writes a team led by Tomás Ruiz-Lara from Spain’s Instituto de Astrofísica de Canarias (IAC).

Sagittarius is a low-mass satellite of the Milky Way that occasionally passes close enough to cause gravitational effects, such as ripples in the distribution of stars.

The new study, based on data gathered by the European Space Agency’s Gaia mission, suggests that its impact may be more substantial than previously thought.

The researchers say they looked at luminosities, distances and colours of stars within a sphere of about 6500 light-years around the Sun and compared the data with existing stellar evolution models.

Ruiz-Lara suggests the notion that the dwarf galaxy may have had such an effect makes a lot of sense.

“At the beginning you have a galaxy, the Milky Way, which is relatively quiet,” he says. “After an initial violent epoch of star formation, partly triggered by an earlier merger as we described in a previous study, the Milky Way had reached a balanced state in which stars were forming steadily.

“Suddenly, you have Sagittarius fall in and disrupt the equilibrium, causing all the previously still gas and dust inside the larger galaxy to slosh around like ripples on the water.”

In some areas of the Milky Way, these ripples would lead to higher concentrations of dust and gas, while emptying others. The high density of material in those areas would then trigger the formation of new stars.

“It seems that not only did Sagittarius shape the structure and influenced the dynamics of how stars are moving in the Milky Way, it has also led to a build-up of the Milky Way,” says IAC’s Carme Gallart.

“It seems that an important part of the Milky Way’s stellar mass was formed due to the interactions with Sagittarius and wouldn’t exist otherwise.”