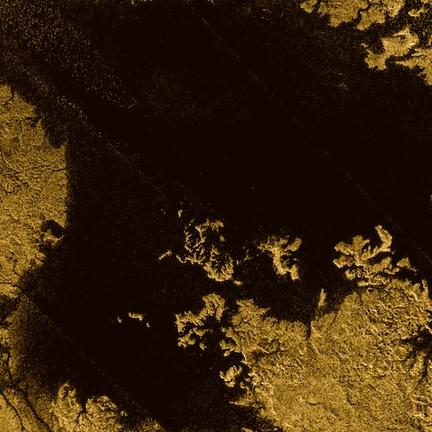 We have known that Titan's three large seas in its northern hemisphere are made up largely of methane since Cassini turned its radar on the second largest, the Ligeia Mare, in 2014.

But a recent study in the Journal of Geophysical Research: Planets takes a closer look at the sea's composition, seasonal changes and even where the methane may have come from.

"Either Ligeia Mare is replenished by fresh methane rainfall, or something is removing ethane from it," says the study's lead author Alice Le Gall, a Cassini radar team associate at the French research laboratory LATMOS, Paris.

"It is possible that the ethane ends up in the undersea crust, or that it somehow flows into the adjacent sea, Kraken Mare, but that will require further investigation."

Saturn's moon Titan has an atmosphere more than 95% nitrogen, making the only moon in the Solar System with a dense atmosphere. It is also the only one with large liquid reservoirs, which has led to speculation that it could sustain life.

Given the frigid conditions methane and ethane can exist in liquid form there, and scientists speculated about the hydrocarbon lakes or seas even before the NASA/ESA Cassini-Huygens mission, which arrived in the system in 2004, confirmed their existence.

And the seas are huge, covering some 1.6 million square kilometres – almost 2% of Titan's surface.

All three are located close to the moon's north pole, surrounded by numerous of smaller lakes. Only one large lake has been found in the southern hemisphere.

Ligeia Mare is about the same size as Lake Huron and Lake Michigan combined.

"Before Cassini, we expected to find that Ligeia Mare would be mostly made up of ethane, which is produced in abundance in the atmosphere when sunlight breaks methane molecules apart," says Le Gall.

"Instead, this sea is predominantly made of pure methane."

Her study is based on data collected with Cassini's radar instrument during flybys of Titan between 2007 and 2015 and combines several radar observations of heat given off by the sea as well as data from a 2013 experiment that bounced radio signals off it.

That 2013 experiment sent back echoes from the seafloor giving an indication of the sea's depth – 160 metres at its deepest point.

Le Gall and her colleagues used the data to get an idea of what the composition of the sea and the seabed might be.

"We found that the seabed of Ligeia Mare is likely covered by a sludge layer of organic-rich compounds," she says.

This tallies with what we previously knew about the moon. Nitrogen and methane react in the atmosphere to produce a wide variety of organic materials, the heaviest of which are believed to fall to the surface.

Le Gall's study suggests that when these compounds reach the sea some are dissolved in the liquid methane while the insoluble ones, such as nitriles and benzene, sink to the sea floor.

The study found that the shoreline around Ligeia Mare may be porous and sodden with liquid hydrocarbons. The scientists deduced that by measuring temperature changes between spring and summer. Unlike on Earth, they recorded little change between the temperature of the land and the sea, suggesting that the land is so filled with hydrocarbons, it changes temperature at much the same rate.

"It's a marvellous feat of exploration that we're doing extraterrestrial oceanography on an alien moon," said Steve Wall, deputy lead of the Cassini radar team at NASA's Jet Propulsion Laboratory in California.

Related reading:
Could there be life in Titan's methane seas?