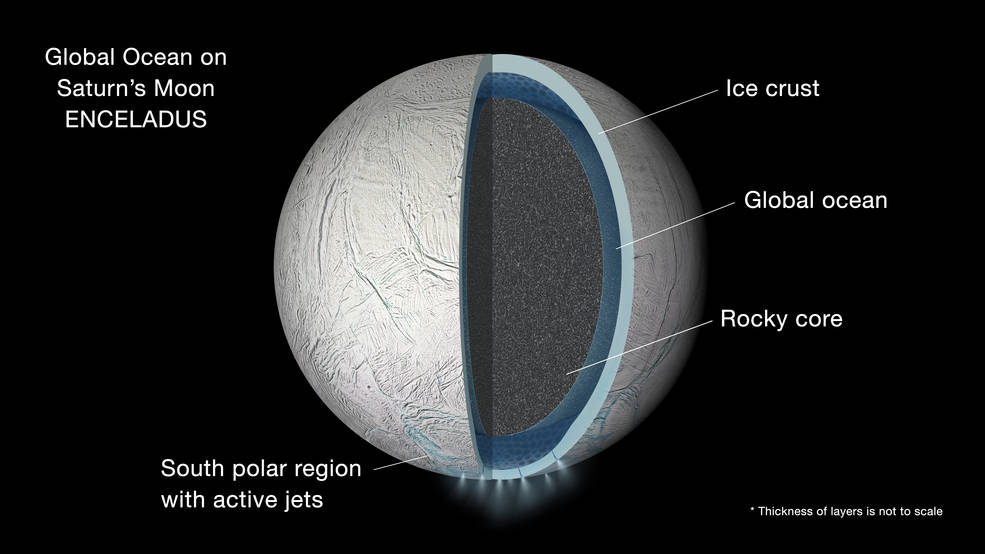 Researchers are more sure than ever that a global ocean lies beneath the icy crust of Saturn’s geologically active moon Enceladus, based on a new study of data from NASA’s Cassini mission.

They found the magnitude of the moon’s very slight wobble, as it orbits Saturn, can only be accounted for if its outer ice shell is not frozen solid to its interior, meaning there must be a global ocean beneath the surface.

Scientists already thought that the sprays of water vapour, icy particles and simple organic molecules Cassini observed coming from fractures near the moon’s south pole was being fed by an ocean [see The Secret Life of Enceladus and The Habitable Zone].

The new research is presented in a paper published in the journal Icarus.

Previous analysis of Cassini data suggested the presence of a lens-shaped body of water, or sea, underlying the moon’s south polar region. However, gravity data collected during the spacecraft’s several close passes over the south polar region lent support to the possibility the sea might be global. The new results – derived using an independent line of evidence based on Cassini’s images – confirm this to be the case.

“If the surface and core were rigidly connected, the core would provide so much dead weight the wobble would be far smaller than we observe it to be,” said Matthew Tiscareno, a Cassini participating scientist at the SETI Institute, Mountain View, California, and a co-author of the paper. “This proves that there must be a global layer of liquid separating the surface from the core,” he said.