Home ■ Space ■ The black hole that has outgrown its galaxy 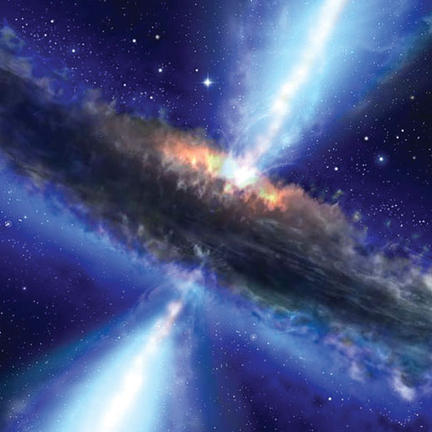 Astronomers have found a “freak” black hole that has expanded so quickly, it’s outgrown its galaxy.

The outsized black hole and its galaxy were described by Swiss Federal Institute of Technology astrophysicist Benny Trakhtenbrot and his team in Science in July.

Most galaxies have a black hole, called a supermassive black hole, sitting at their centre. These ultra-dense objects have a gravity so strong that not even light can escape them. We know these black holes exist because they distort the orbits of nearby stars and gas. Another clue is that matter trapped by a black hole's gravitational pull emits huge pulses of radiation, including X-rays – a powerful cosmic ‘shriek’.

Seven years ago NASA’s Chandra telescope first detected X-rays spewing from the centre of a distant, ancient galaxy called CID-947. The X-rays reaching us were emitted around 12 billion years ago – two billion years after the Big Bang.

In 2012 Trakhtenbrot and his colleagues noticed something odd when they revisited that patch of sky. Using the supersensitive MOSFIRE instrument on the Keck Observatory in Hawaii, they calculated the mass of CID-947 and its black hole – and got a shock.

“The result was so surprising, two of the astronomers had to verify

There’s nothing special about CID-947 itself, says Trakhtenbrot – it seems to be a regular galaxy about the same mass as our own. But whereas the black hole at the centre of our Milky Way is around four million times the mass of the Sun, the black hole in the middle of CID-947 is seven billion solar masses – far bigger than it should be, given the size of its galaxy.

Astrophysicists have long thought the mass of a supermassive black hole is in sync with the mass of its host galaxy. After all, black holes and new stars grow predominantly from the same raw material – a cloud of cold gas – so as one gets bigger, so should the other. In our corner of the Universe, black holes in the centre of galaxies generally account for about 0.5% of the galaxy’s mass. CID-947’s black hole, on the other hand, accounts for 10% of its mass – it is a super supermassive black hole. “The result was so surprising, two of the astronomers had to verify the galaxy mass independently,” Trakhtenbrot says.

But Alister Graham, an astrophysicist at Melbourne’s Swinburne University, says he isn’t surprised by the new finding. His own work suggests that, for spiral-shaped galaxies, it’s the mass found in the galaxy’s central bulge, and not its arms, that’s important for black hole size. In calculations published in The Astrophysical Journal in 2013 he found that a 10-fold increase in the mass of a spiral galaxy’s central bulge is associated with a 100-fold increase in the mass of its black hole. He has even predicted that galaxies with massive bulges would include these oversized black holes. “The galaxy they found appears to follow this rule,” he says.

Galaxy CID-947 is so distant it’s impossible to tell whether it is a spiral, like the Milky Way, or elliptical. But Trakhtenbrot and his team are confident that the supermassive black hole’s growth spurt will soon end.

The faster a feeding black hole slurps down gas and stardust, the more superheated this material becomes and the more energy it flings out – including X-rays such as those picked up by the Chandra telescope. After feeding for millions of years, these energy burps start to blow away the galactic gas and dust that remains in its vicinity. Trakhtenbrot says this starves the black hole and halts its growth.

Trakhtenbrot says CID-947 “is still forming stars happily, and will keep doing so for the next few billion years”. So could it be a late bloomer that will eventually catch up to the size of its black hole? Trakhtenbrot ran some models to see how much the galaxy will grow. The answer is “not enough”. “It will always remain a freak,” he says.