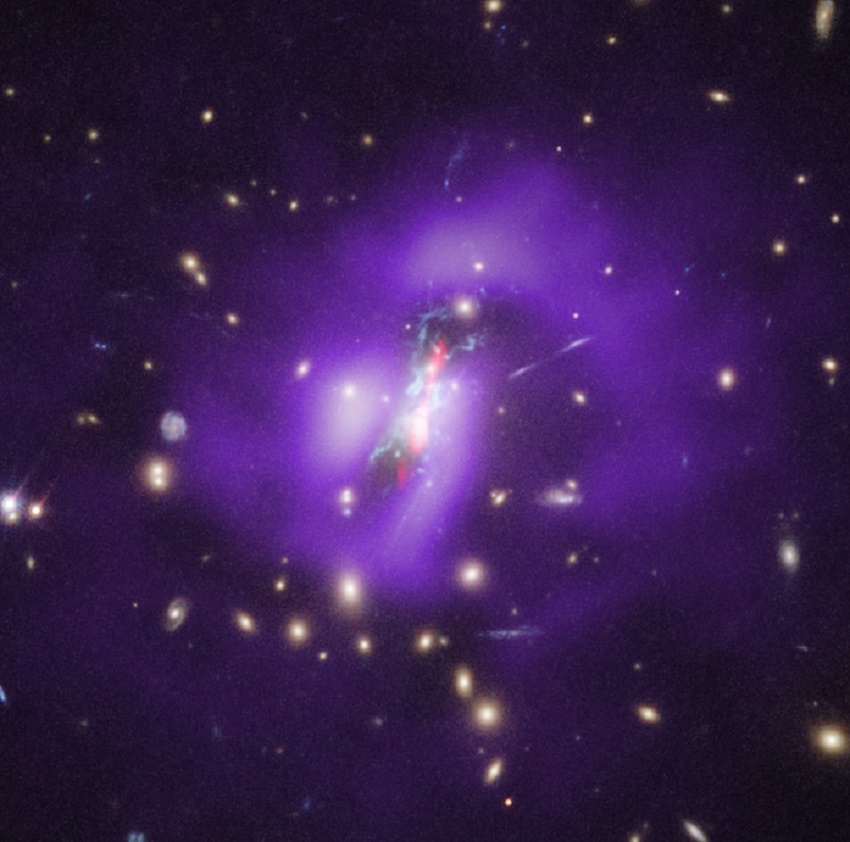 optical and radio image reveals the mechanism allowing rapid star formation at the core of the Phoenix Cluster.

Astronomers have confirmed the first example of a galaxy cluster where large numbers of stars are being born at its core.

Galaxy clusters consist of hundreds or thousands of galaxies embedded in hot gas, as well as invisible dark matter. The largest supermassive black holes known are in galaxies at the centres of these clusters.

For decades, astronomers have looked for galaxy clusters containing rich nurseries of stars in their central galaxies. Instead, they found powerful, giant black holes pumping out energy through jets of high-energy particles and keeping the gas too warm to form many stars.

Now, a team led by Michael McDonald, from the Massachusetts Institute of Technology, US, says it has compelling evidence for a unique galaxy cluster where stars are forming at a furious rate, apparently linked to a less effective black hole in its centre. The jets from the central black hole appear to be aiding in the formation of stars.

The findings are reported in The Astrophysical Journal.

“This is a phenomenon that astronomers had been trying to find for a long time,” says McDonald. “This cluster demonstrates that, in some instances, the energetic output from a black hole can actually enhance cooling, leading to dramatic consequences.”

The galaxy cluster is called the Phoenix Cluster, and it is located about 5.8 billion light-years from Earth in the Phoenix constellation.

The large galaxy hosting the black hole is surrounded by hot gas with temperatures of millions of degrees. The mass of this gas, equivalent to trillions of Suns, is several times greater than the combined mass of the stars in all the galaxies in the cluster. {%recommended 9818%}

This hot gas loses energy as it glows in X-rays, which should cause it to cool until it can form large numbers of stars. However, in all other observed galaxy clusters, bursts of energy driven by such a black hole keep most of the hot gas from cooling, preventing widespread star birth.

Evidence for rapid star formation in the Phoenix Cluster was first reported in 2012 by a team led by McDonald. In the latest study, he and colleagues used new data from NASA’s Chandra X-ray Observatory and Hubble Space Telescope, and the NSF’s Karl Jansky Very Large Array (VLA) to make deeper observations.

By combining long observations in x-ray, optical, and radio light, they gained a ten-fold improvement in the data quality compared to previous observations.

The new Chandra data reveal that hot gas is cooling nearly at the rate expected in the absence of energy injected by a black hole.

The VLA radio data reveal jets blasting out from the vicinity of the central black hole. These jets likely inflated bubbles in the hot gas that are detected in the Chandra data. Both the jets and bubbles are evidence of past rapid growth of the black hole.

Early in this growth, the black hole may have been undersized, compared to the mass of its host galaxy, which would allow rapid cooling to go unchecked.

“In the past, outbursts from the undersized black hole may have simply been too weak to heat its surroundings, allowing hot gas to start cooling,” says co-author Matthew Bayliss, now at the University of Cincinnati, US.

“But as the black hole has grown more massive and more powerful, its influence has been increasing.”