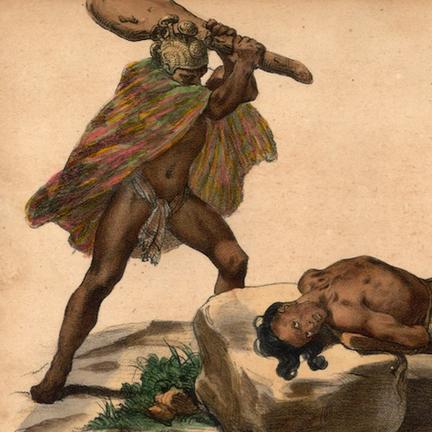 Human sacrifice, or the ritual killing of people for religious or spiritual reasons, was widespread across early human society up until the 20th century.

For years, researchers have theorised that this integral tradition may have functioned as a way to enforce and maintain strict class systems in society.

In a new paper published this week in Nature, researchers at the University of Auckland in New Zealand believe they have quantified this theory.

The finding, according to the research team, suggests that ritual sacrifice may have played a part in the emergence of the large, complex societies we see in today’s world.

The paper describes human sacrifice as “the deliberate and ritualised killing of an individual in order to please or placate supernatural beings”, which is known to have occurred in early Germanic, Arab, Turkic, Inuit, American, Austronesian, African, Chinese and Japanese cultures.

While historians have speculated on the potential function of ritual killings since at least 500 years ago, this is only the second, much larger study into their impact on the stratification of social hierarchies.

The research team, led by Joseph Watts at the University of Auckland, analysed 93 traditional Austronesian cultures – the language groups hailing from an area between Madagascar and the Pacific Islands – paying close attention to their genetic development, to pick up clues about ancestry and family lines.

For each culture, the researchers recorded whether human sacrifice was present or absent (40 of the 93 cultures surveyed performed ritual killings), as well as the level of social hierarchy.

For example, a culture would be coded as “moderately stratified” if there was evidence of inherited differences in wealth and social position, but people could potentially change their status within a generation. Cultures were coded as ‘highly stratified’ if there was little or no possibility of status change.

The researchers then mapped and compared the presence of human sacrifice and the development of social stratification over time.

Their findings showed a link between these two characteristics. In other words, the presence of human sacrifice pushes an already-stratified society towards a more inherited class systems, and works to maintain or develop social stratification.

“Unpalatable as it might be, our results suggest that ritual killing helped humans transition from the small egalitarian groups of our ancestors, to the large stratified societies we live in today,” the paper reads.

The research analysed segments across varied social structures, and diverse environments, and each resulted in a similar outcome.