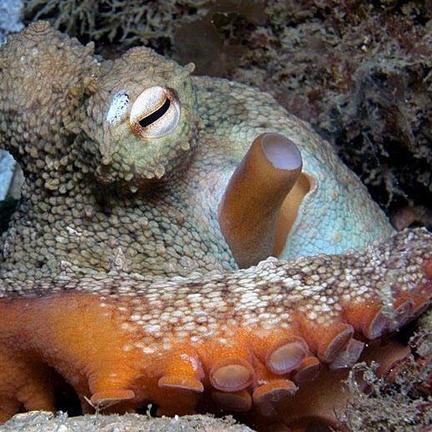 Octopuses are solitary creatures, and can be aggressive when they encounter others of their kind. But it seems they have developed sophisticated displays to settle disputes without violence.

David Scheel of Alaska Pacific University in Anchorage, Peter Godfrey-Smith from the University of Sydney and colleagues documented 52 hours of footage involving more than 186 interactions between shallow-water octopuses (Octopus tetricus) in Jervis Bay, south of Sydney.

“You do tend to see them on their own. And if you put two octopuses in a tank together you often end up with one octopus,” Godfrey-Smith told The Guardian newspaper.

But in Jervis Bay the animals are thrown together due to a range of factors. The high concentration of predators, combined with limited shelter, means the octopuses meet each other more often than in most places.

In the study, published in the journal Current Biology, the scientists found a range of behaviours when the animals encountered each other. Aggressive males stretched their bodies to appear larger and the octopuses changed colour to signal dominance. Dark colours signified an octopus was unwilling to back down and when two dark-coloured animals met, a fight was likely. When a dark octopus met a light one, the paler animal usually retreated.

By and large, the behaviours appear to work, with the scientists reporting they saw fewer fights than they were expecting.

“What is interesting is the tolerance they have for one another,” Scheel told New Scientist. “There must be some incentive to get along.”

But if confrontation was rare, so was mating.

The most common social gesture observed was when one octopus reached an arm towards another and sometimes received an arm-reach in return.

“We don’t know what this behaviour is about, but we’d like to find out,” Scheel said.