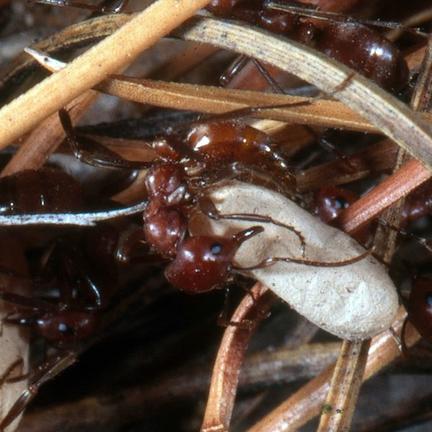 The parasitic ant, Polyergus breviceps, is one of the most ruthless slavedrivers the world has ever seen. But it does not rule with brute force, rather with an overloaded sense of smell.

How Polyergus parasitic ants take over a nest of their host, such as the Formica altipetens, is pure tactical genius. A single pregnant queen walks in and kills the host queen, taking on her scent and claiming the throne.

The host workers don’t notice, nurturing the invader’s pupae, foraging for food and keeping up nest maintenance as usual.

Once they are all grown up, the parasite’s offspring don’t lift a finger. Instead they’re slave traders, venturing out only to kidnap pupae from neighbouring Formica colonies, which grow up to be fresh slaves for the colony.

But what stops a slave uprising?

Foreigners are usually recognised, given away by smelly waxy chemicals in the exoskeleton that ants use to identify each other.

The chemical mixture depends on the genes, but can also be pick them up through grooming or sharing food. Ants with foreign smells are attacked.

University of California, Berkley, researchers collected enslaved and free-living Formica altipetens ants from the alpines of Arizona’s Williams Valley to find out. They analysed their mix of exoskeleton chemicals and sequenced the ants’ DNA.

It turns out that the enslaved Formica colonies were genetically and chemically more diverse than their free-living counterparts.

And in behavioural tests these enslaved ants were up to seven times less likely to become aggressive toward non-nestmates.

By kidnapping fresh slaves from neighbouring nests, the authors say, the Polyergus parasites get their slaves used to a greater variety in smells – reducing their ability to pinpoint who’s family and who’s not.

This way, the slave ants become less likely to target and attack the Polyergus parasites, the authors say.

“When free-living Formica ants are kidnapped into the Polyergus colony, they enter a society that is comprised of kidnapped ants from many other Formica colonies,” study author Neil Tsutsui, who published the research in the journal PLOS ONE, explained.

“Here, we show that this rich social environment alters the behaviours displayed by the enslaved ants.”