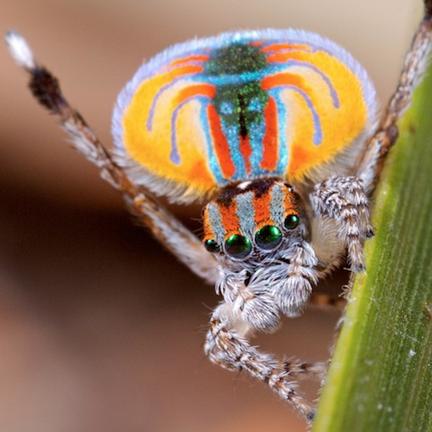 Be it peacock feathers or butterfly wings, we can thank hard market competition for the animal kingdom’s brilliant variety of colours and patterns. Females are picky – they invest time and energy producing offspring. Males make a less risky investment in sperm, compete with each other for access to females and have to prove they’re worth her time.

A male of the Australian native peacock spider puts on the full show and dance to impress a prospective mate.

To test the waters, this male carefully sticks out a leg or two to capture a female’s attention. Once he has eye contact, he makes his move. Like a peacock unfurling its tail, he raises a brightly coloured flap of colours and patterns from his back, and shimmies it from side to side.

This flap is more than just fashion, says Michael Kasumovic, biologist at the University of New South Wales. In the wild, several species of peacock spider are often found in a small space. “The more different they look, the easier it is for the [female] to distinguish which species they are,” he says. That’s to stop a female from wasting her time producing offspring that aren’t able to reproduce down the line, so cannot pass on her genes.

Even once the male has won over a female with is dance, his test is only just beginning. The female then chases the male around, only letting him mate with her once she’s satisfied he’s a fit and healthy candidate.

Manakin birds, native to the American tropics, are fast movers. To showcase they poses the kind of superior muscular and cardiovascular traits that any mother would want her offspring to inherit, the males pull off a “moonwalk” so fast, they appear to be buzzing along branches.

This feat requires a bit of energy – the bird’s heart rate ramps up to double the normal during this courtship display. But the faster they dance, the better. In 2011 researchers from the University of California, Los Angeles, used high speed cameras to capture a golden-collared manakin male’s twists and shuffles and recorded the courtship success. Turns out, the females have a keen eye, picking the faster male’s dance to within a tenth of a second.

Like many seabirds the booby bird (named after the Spanish word for “fool”) looks a little awkward on land. And his courtship dance is no exception. Thankfully the purpose of his waddle is not to show off speed or precision. This bird flaps its flippers at a female to show off how healthy and well-fed he is.

In 2006, researchers at the University of Vigo in Spain found the boobies’ feet became duller when deprived of food for two days, but brightened back up as soon as the birds were fed fresh fish. The blue colour, the team found, is produced by carotenoid pigments in the fish it ingests.

And turns out the female doesn’t invest when her male is starving. When the researchers applied a light-blue makeup to the feet of male boobies, make the feet look paler, the females produced smaller eggs.

Flatworms have both male and female sex organs – so “wooing” becomes a violent battle of fighting out who’s who. Two flatworms fence each other for up to an hour, each with two dagger-like penises to determine who’s stuck as the female to carry the eggs.

The winner, the “male”, is whoever successfully spears and forcefully injects sperm into the other, who takes on the female role. The fertilised female trudges off across the ocean floor to find food for her growing brood. The male swims merrily off to fence another day.

The way to a female penguin’s heart is a perfect pebble. Some penguin species, like the gentoo and Adélie penguins native to Antarctica, build pebble nests in the snow on which to lay their eggs. These pebbles allow melted water to drain from around the eggs, preventing flooding of the nest and protecting their growing chicks from hypothermia. Males want to find the right rocks for their female, but suitable rocks are scarce, and the competition becomes fierce as males and females steal pebbles from neighbouring nests.

Some males take advantage of dire conditions. They hoard rocks and wait for a female to come begging. Because even though these penguins are monogamous, females will trade sex for pebbles from other males.

Antechinus goes out with a bang

Sometimes there’s just no time to woo. This cute fuzzy Australian mammal, the antechinus, may look shy but during mating season is anything but.

Just before mating season starts, the males stop producing sperm – and the clock starts ticking. To pass on their genetic material, the males get straight to it, mating with as many females as possible for up to 14 hours at a time.

But the males’ bodies can’t keep up with the stress of this marathon for long. They lose fur, develop ulcers and bleed internally. Around two weeks after their first mating started all males are dead.

But before you make value judgments about the manakin's moonwalk, or question the gentoo's obsession with pebbles, cast your eye over the "displays" of the guys in the video above – a flashback to some 1980s dating game fails.

But seriously, humans have our own techniques.

“The face is a bit like the peacock’s tail in the human world,” says Leigh Simmons, biologist at the University of Western Australia.

But attraction is not that simple – studies have shown women to be drawn to faces with lower levels of “masculinity” over less fertile periods of the reproductive cycle, for example.

And the dating game has changed over the last five years, Kasumovic says. With online dating on the rise, being quick with a funny caption could be just as important as the shape of your jawline.

“I think the online dating and app dating scenes are extremely intriguing,” he says. “I think they change the game. Individuals have to have different strategies to try and attract a mate.”