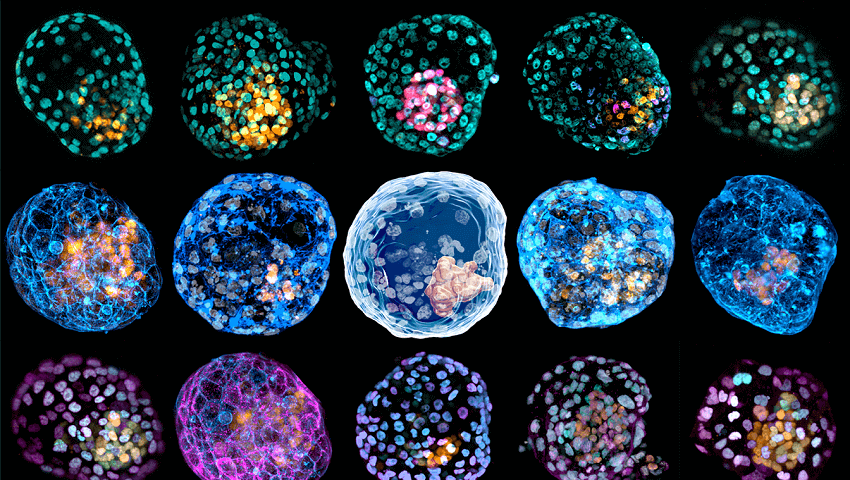 It was an unanticipated event that led to what researchers are calling one of the greatest advancements to date in our understanding of early-stage embryos, called a blastocyst: the tiny ball of cells that has the potential to become an embryo and, eventually, a human.

The research has just been published in Nature.

Two years ago, an international team of scientists – led by Monash University’s Professor Jose Polo – were studying how induced pluripotent stem cells (iPS cells), a type of cell similar to an embryonic stem cells but derived from skin or blood cells, can be reprogrammed into any other human cell.

But Polo’s team noticed something other groups had missed: when they reprogrammed the cells, not all did as they were told.

Some – about two per cent – seemed to activate a library of unexpected genes. So using single-cell transcriptomics, a technique that can look at the gene expression of individual cells, Polo discovered the cells were activating genes you’d expect to see in the early days of embryogenesis – the period after a sperm has fertilised an egg.

In a flat Petri dish, the cells did little more than flash these unexpected genes. But cells are not isolated entities in the body; they work together to form complex structures, sending each other signals as they go. Polo’s team wondered what might happen if they were given the chance to talk.

So they took these cells that had been growing on a flat-surfaced Petri dish and placed them on an AggreWell microwell. These structures, often used for stem-cell research, look like an inverted pyramid, with the cells, in solution, sitting clustered at the bottom of the well. Then the team left them to interact.

“What we realised was that six days later, the cells had become balls of organised cells, so we asked ourselves: what are these balls?” Polo says.

To get an answer, the team needed molecular data – they needed to know which genes and proteins were active in which cells. They solved this with microscopy, looking at biomarkers. They also used some sophisticated genomic approaches (called single-cell transcriptomics) to investigate.

They also needed to consider cellular architecture: they needed to see and analyse the structural look, shape and location of the cells. They also did this with microscopy. Last, to understand how the cells behaved, they conducted a battery of complex analyses.

With results in, the team dubbed the cell balls iBlastoids. And while they may resemble an IVF early-stage embryo, they are by no means identical. One of the three cell types in the blastocyst known as “primitive endoderm” (the layer that will become the yolk sac) was not well defined in the iBlastoids.

“This discovery is still really important; even if they are a model and not the exact thing, they will provide valuable data when it comes to finding out more about why miscarriage occurs, and perhaps point to causes of infertility,” Polo says.

At the moment, everything we know about the earliest stages of human development is from studying IVF embryos donated to science. Polo says this discovery will allow researchers to not only learn the role of any gene or mutation happening in the implantation period, but also better understand how toxins and drugs affect the first stage of human development.

While the International Society for Stem Cell Research (ISSCR) expects to release an update to its guidelines for stem cell research and clinical translation later this year, existing guidance published in 2016 recommends that this is an area of research only permissible following appropriate review and the need for a compelling scientific rationale. (See “Ethics and embryos” for more about the ethical considerations of this work.)

The Polo team’s work draws on the discovery of Nobel Prize winner Shinya Yamanaka, who in 2007 showed that it is possible to transform ordinary adult skin cells into cells that, like embryonic stem cells (which can develop into each of the more than 200 cell types of the adult body as long as they are specified to do so), are capable of developing into any cell in the human body.

In 2007 (2006 in mice), Yamanaka discovered that by adding just four factors into adult skin cells from humans, he could induce the cells to become like embryonic stem cells. He called them induced pluripotent stem cells, or iPS cells.

Since this discovery, iPS cells have become an important tool for modelling how various organs in the body form, for investigating human disease and for screening drugs. But until the Polo team’s discovery – and the discovery made by a second group of researchers, also published in Nature on Thursday, but using a different method – it was not clear whether iPS cells were able to model human blastocyst development.

Previous studies in mice had built blastoids using stem cells, and other researchers had used stem cells to model other aspects of post-implantation. But this is the first time that an integrated model of the earliest stage has been generated in human cells.

Professor Megan Munsie, deputy director of the University of Melbourne’s Centre for Stem Cell Systems, says while the findings are building on previous, similar, research, they’re nonetheless an invaluable step towards potentially understanding the role of infertility, miscarriages and even the effects of other drugs on early human development.

“It’s amazing that these cells can self-assemble and replicate something that looks like this early stage of human development,” she says.

And while it’s a valuable first step, replicating the results on a bigger and more consistent scale is another thing altogether, Munsie says.

“Yes, we’ve done this, but the question now is: how reliable is this as a model? A lot more needs to be done around understanding the limitations of this technology.

“Both papers talk about the inefficiency of their approach: while you can stick these cells together only some of them will form the blastoids, and we don’t yet know why it happened or even how it happened. Once we figure that out, we can look for other applications.”

Currently, only 1 in 10 attempts to create these structures result in success, and the pace at which they form is inconsistent.

“To capitalise on the discovery, the process will need to be more controlled and less variable,” Rugg-Gunn says, adding that it’s also “important to establish in future research which aspects of human early development the blastocyst-like structures are able to recapitulate.

“If the structures can shed light on how the cell types in a blastocyst communicate with each other and also help identify the key factors that are required for lineage formation and development, then this will be a very informative cell model.”

Human skin cells are being reprogrammed by a cocktail of reprogramming factors (RF). During reprogramming, these are then placed into V-shaped microwells, where they gradually develop into a blastocyst-like 3D cellular structure called an iBlastoid. Credit: Monash BDI.