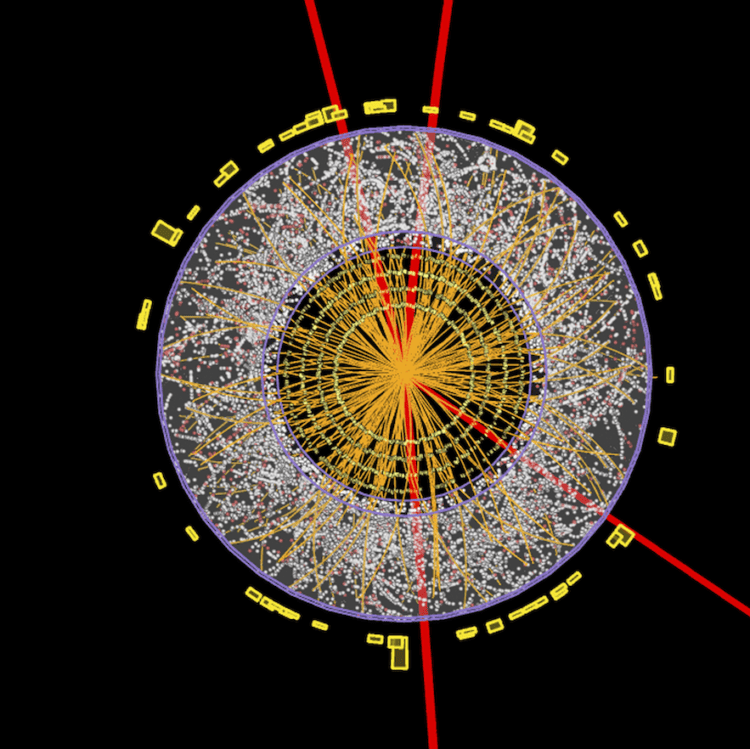 Graphic of a transverse section through a detector showing one of the numerous particle collision events recorded during the search for the Higgs boson. Credit: Atlas Collaboration/CERN

Around the turn of the 4th century BC, the Greek philosopher Democritus caught the smell of baking and thought that little bits of bread must be floating through the air and into his nose. He called the little bits “atoms” (meaning “uncuttable”) and imagined them as tiny spherical balls.

But atoms are not little solid spheres. They are made of even smaller bits, called particles.

Scientists’ best description of those particles and the forces that govern their behaviour is called the Standard Model of particle physics, or just “The Standard Model”.

And no, there is no Economy Model, nor a Deluxe one.

There are, however, still a few kinks to be ironed out (as well as a couple of whopping omissions). That’s why it is sometimes called the “Theory of Almost Everything”.

How did it all kick off?

Back in the early 20th century, scientists thought there were only three fundamental particles in nature: protons and neutrons, which make up the nucleus of an atom, and electrons that whizz round it.

But in the 1950s and 1960s physicists started smashing these particles together and some of them broke. It turned out the protons and neutrons had even smaller particles inside them.

Many dozens of new particles were discovered – and for a while, nobody could explain them. Physicists called it the “particle zoo”.

In the 1970s, physicists such as Murray Gell-Mann found an order amongst the chaos. The step they took was similar to the one Russian chemist Dmitri Mendeleev took to find an order to the chemical elements in his periodic table.

The new ordering of the particles explained many of the properties of the newly discovered particles, as well as correctly predicting some new ones.

The particles of the Standard Model make up one big family. Your first introduction can be daunting, a bit like attending a gathering with a lot of distant cousins you’ve never heard of. No matter how strange these cousins are, it is important to remember that they are all related.

Gell-Mann and others placed the particles in two main categories: fermions and bosons.

Fermions are subdivided again into two kinds of particles, depending on the forces they feel. These are the quarks and the leptons (see below).

Particles communicate with one another via four forces: electromagnetism, the strong force, the weak force and gravity.

Different particles communicate through different forces, similar to the way people can communicate in different languages. For example, only the quarks speak “gluon”. While electrons can speak “photon” as well as “W boson” and “Z boson”.

Electromagnetism is the force that holds electrons in an atom. It is communicated by photons.

The strong force keeps the nuclei of atoms together. Without it, every atom in the universe would spontaneously explode. It is communicated by gluons.

All matter is made of two types of particles known as quarks and leptons.

Quarks: (the purple particles in the figure) come in six “flavours”, all with weird names. It’s useful to see them as coming in pairs to make three generations. These are “up” and “down” (first generation), “charmed” and “strange” (second generation) and “top” and “bottom” (third generation).

Only the up and down quarks are important in day-to-day life because they make protons and neutrons.

The others make only “exotic” matter, which is too unstable to form atoms. Physicists can create exotic matter in particle accelerators, but it usually only lasts a fraction of a second before decaying.

Leptons: there are six leptons, the best known of which is the electron, a tiny fundamental particle with a negative charge.

The muon (second generation) and tau (third generation) particles are like fatter versions of the electron. They also have negative electric charge, but they are too unstable to feature in ordinary matter.

And each of these particles has a corresponding neutrino, with no charge.

Neutrinos deserve a special mention because they are perhaps the least understood of all the particles in the Standard Model.

They are fast but interact only through the weak force, which means they can easily zip straight through a planet. They are created in nuclear reactions, such as those powering the Sun’s core.

Now that we know the fundamental particles of nature, we can begin to stack them together in different ways to make bigger particles.

The most important composite particles are the baryons, made of three quarks. Protons and neutrons are both kinds of baryon.

The European Organisation for Nuclear Research’s (CERN) biggest particle collider smashes protons together. Because protons are a kind of hadron, it’s called the Large Hadron Collider, or LHC.

Antimatter: double or nothing?

As far as we know, all quarks and leptons have twin particles of antimatter. Antimatter is like matter except it has the opposite charge. For example, the electron has a counterpart that’s exactly the same mass, except with positive charge instead of negative. When a particle of matter meets its antimatter twin, they both annihilate in a burst of pure energy.

Antimatter is incredibly rare in the Universe, although it does have some important roles in technology. Positron emission tomography (PET) scanners, for instance, use the annihilation of positrons to see inside the body.

One of the great mysteries of physics is why the Universe is made almost entirely of matter. Many particle physicists are striving to answer it.

The bread that Democritus sniffed is made of only the first generation of fundamental particles.

Electrons orbit the nucleus in arrangements determined by quantum mechanics (see our primer quantum physics for the terminally confused).

The Higgs: the god particle

You probably noticed the loner off to the right side of particle table – the Higgs boson. The Higgs is a special kind of particle that gives the other fundamental particles their mass.

The idea is that there is a field existing everywhere in space. And when particles move through space, they tend to bump into this field, and this interaction slows them down (similar to how it’s more difficult to move through water than air). This interaction is what gives fundamental particles their mass.

Some particles such as photons and gluons don’t interact with the Higgs field, so are massless.

The Higgs Boson was a theoretical particle until 2013 when CERN announced it had been discovered at last, although scientists are still uncovering its properties.

The biggest hole in the Standard Model is the lack of gravity. The fourth force of nature just does not fit into the current picture.

Some physicists think gravity is also transmitted by a kind of particle, called a graviton, but so far there is no evidence that this particle exists.

Dark Matter: For observing the Universe, it looks like a huge portion of it is made of Dark Matter – a new kind of stuff that doesn’t interact with regular matter and so is probably missing from the Standard Model entirely.

Some physicists are looking for extensions to the Standard Model to explain these mysteries. Supersymmetry is one extension where every particle has another twin with higher mass.

Some of these particles would interact very weakly with ordinary stuff and so could be good candidates for Dark Matter.