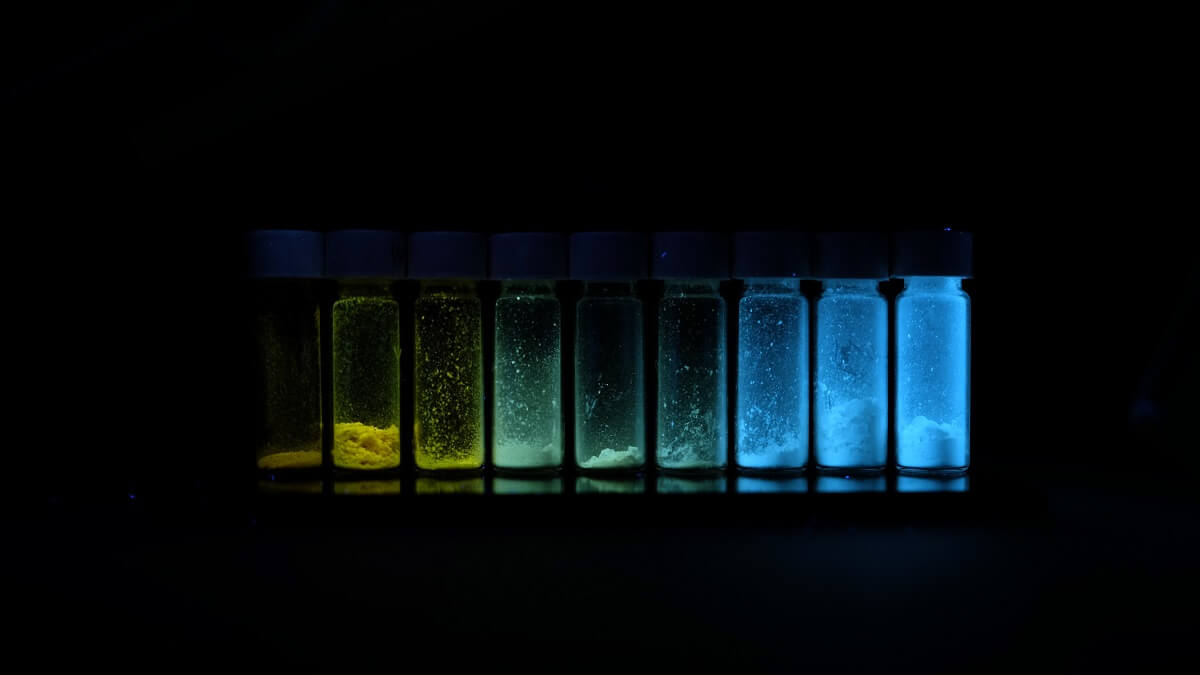 These polymers, seen here under UV light, are composed of the exact same components. The only difference is their chain length. Credit: Suiying Ye / ETH Zurich

An international team of chemists, including some Australians, have developed a type of polymer that can glow in a broad range of colours.

Fluorescent molecules are useful for lighting, solar cell research, medical imaging, and biological lab tests like PCR tests, among other things. It can be difficult to achieve precise colours in fluorescent dyes, and manufacturers often have to mix very different compounds together to get to certain colours.

But a new paper published in Science Advances has described a polymer that can be adjusted to fluoresce, or ‘glow’, in finely tuned colours – without major changes to its chemistry.

Polymers are molecular chains, made from smaller molecular components linked together. These researchers, based at ETH Zurich in Switzerland and the Royal Melbourne Institute of Technology, designed and tested polymers made from molecule that are similar, but not identical to, the structure of polystyrene, called organic styrenic molecules. Adding some different molecules to the centre and the ends of the chains caused the molecules to glow.

“The chains have a symmetrical structure, and two components within them contribute to the fluorescence,” says Yinyin Bao, co-author on the paper and a group leader at the Institute of Pharmaceutical Sciences, ETH Zurich.

“One component, called the fluorophore, sits in the middle of the chain, while the other component occurs once at each of the chain’s two ends.”

By varying the number of organic links in the chain – and thus the chain length – the team was able to change the colour of the molecule under UV light. “It’s the interaction of the chain end and the fluorophore that’s responsible for the fluorescence of these polymers,” says Bao. “The distance between the two components affects how they interact and thus the colour that’s emitted.”

With fewer than 18 links, the colour-changing polymer emitted yellow light. It became green by 25 links, and blue with more than 44 links in the chain. The researchers are working on molecules that can emit other colours as well.

“What’s special about this is that these differently luminescent polymers are all composed of the exact same components. The only difference is the chain length,” says Bao.

Bao says the colour-changing polymer may be useful in lab diagnostic tests and microscopy. They could also be applied to solar cell development, and possibly as extra security features on banknotes and passports.