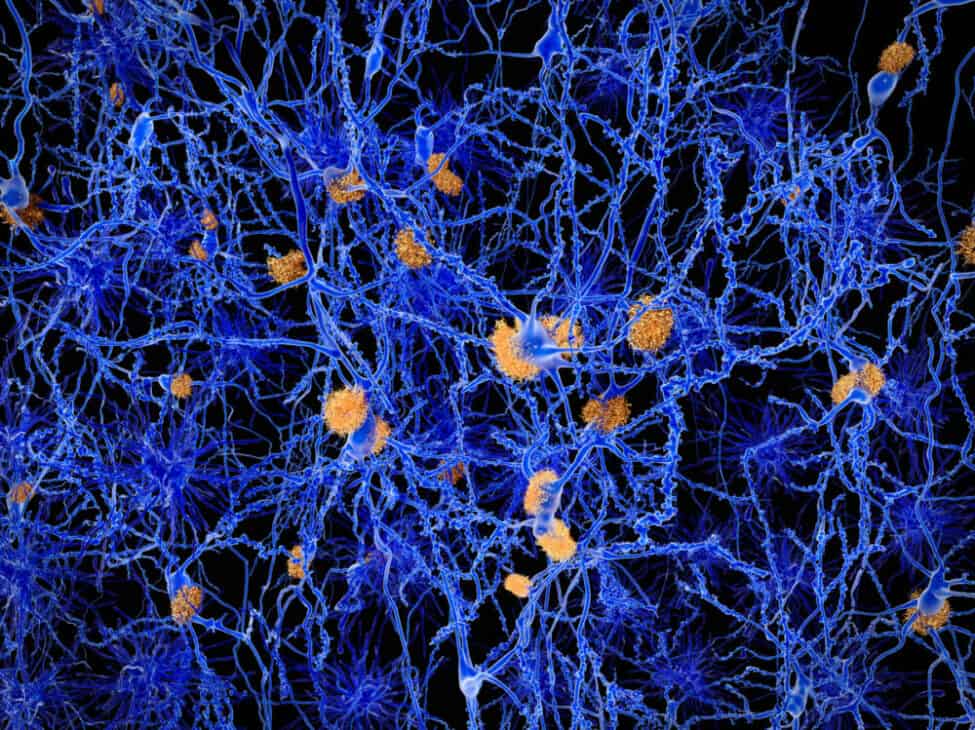 Amyloid plaques can be seen gumming up the spaces between neurons in this illustration.

When it comes to the perpetrator of Alzheimer’s disease (AD), the finger of blame has long pointed to hard deposits of protein in the brain known as amyloid plaques. But smouldering signs of inflammation are also clearly evident in the background.

Now a paper in Nature reveals how the two processes connive. During inflammation, specks of a protein called ASC are released. Like the grit inside a pearl, they seed the deposition of amyloid. The authors – Carmen Venegas at the University of Bonn, Germany and colleagues – showed that in mice, removing the specks prevented the formation of amyloid and slowed progression of the disease.

“The paper bridges different camps and puts inflammation front and centre as a potential cause of AD,” says Bryce Vissel, an AD researcher at the University of Technology, Sydney.

The finding also suggests that anti-inflammatory drugs, particularly those that target the formation of the ASC specks, offer a new therapeutic way forward.

“This is an extremely important paper for the Alzheimer’s field and is likely to greatly influence the way researchers think about potential Alzheimer’s treatment strategies going forward,” adds Vissel.

The AD-afflicted brain is like a crime scene. The victims are masses of dead neurons that leave many parts of the brain shrunken. The suspects are many: alongside amyloid plaques, tangles of tau proteins inside the neurons have also been interrogated, and investigators find signs of riled-up immune cells called microglia everywhere they look.

But amyloid plaques have been at the top of the list. That’s because people who inherit rare genetic forms of the disease also inherit abnormal genes that cause excessive production of sticky forms of amyloid protein that are more likely to aggregate into plaques. Assuming that the plaques were also the cause of neuron death in more common forms of AD, researchers have for the last three decades been developing plaque-busting drugs. But while some, like the promising antibody aducanumab, have scrubbed away plaque, so far they do not appear to have halted the disease.

Given the dead end, many researchers have turned their interest to other suspects. An irritable brain has become a hot favourite. Those agitated microglia and the mobilizing chemicals factors they secrete are found all over the brains of AD sufferers. General signs of body inflammation in middle age also appear to correlate with an increased risk of AD in later life.

The Venegas team decided to piece together the chain of events that occurs after microglia become irritated. A key occurrence is the formation of a protein complex inside them called an inflammasome. Like a smouldering fire, it continues to release inflammatory signals which mobilize other microglia.

One of the other things the inflammasome does is to release tiny specks of aggregated ASC protein. The researchers had a hunch that ASC specks might be affecting the course of the disease. Not only are they visible in the brain tissue of people with AD, but mice studies had shown that when the formation of the inflammasome was impaired, the mice were protected from their version of the disease.

To test if the specks played some role, the researchers carried out experiments in mice that are genetically engineered to overproduce amyloid plaque. Some of the mice were also engineered not to produce the ASC protein.

For starters, the researchers found that mice lacking ASC produced less amyloid plaque and their disease appeared less severe: they performed better at memorizing mazes, for instance. When brain extracts from plaque-ridden mice were injected into young mice, they seeded the development of new amyloid plaques.

But strikingly, if antibodies to ASC were injected at the same time, it interfered with the seeding.

If the recipient animals lacked ASC altogether, no spreading was seen. ASC did indeed appear to be acting as the grit that seeded the plaque deposits.

The findings show how inflammation and amyloid may collude in a vicious cycle to cause the disease. Amyloid deposits cause inflammation; inflammation releases ASC; ASC seeds the deposition of more amyloid plaque.

What this means, explains senior author Michael Heneka, is that minor insults to the brain – perhaps a virus or mild injury – could snowball into a major inflammatory cascade that kills off neurons.

So what’s to be done?

Heneka points out that population studies already show the use of anti-inflammatory drugs like ibuprofen allay the onset of AD. But he says these drugs are too non-specific. Many drug companies are now focussed on finding drugs that inhibit the function of the inflammasome in a particular tissue. “This is all under way,” he says.