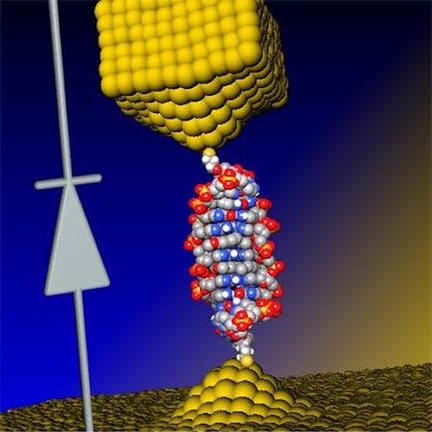 Illustration of the coralyne-layered DNA junction used to create a single-molecule diode, which can be used as an active element in future nanoscale circuits. Credit: U. Georgia/Ben-Gurion U.

The world’s smallest diode, the size of a single molecule of DNA, has been developed by a team of US and Israeli scientists.

One of the developers, Yoni Dubi of the Ben-Gurion University of the Negev, described it as “a significant milestone in the development of molecular electronic devices”.

“It gives us new insights into the electronic transport mechanism,” he said.

Dubi, a chemist, was working in collaborastion with scientists from the University of Georgia.

In the drive towards nanoscale electronics, scientists are looking for molecules with interesting properties and find ways to establish reliable contacts between molecular components that mimic conventional electronic elements.

The nanoscale diode operates like a valve ensuring electronic current flow in one direction.

These nanoscale diodes, or molecules, have properties that resemble traditional electronic components such as a wire, transistor or rectifier.

In developing the diode, Bingqian Xu from the University of Georgia a dn his team took a single DNA molecule constructed from just 11 base pairs and connected it to an electronic circuit only a few nanometers in size.

The DNA alone did not work as a diode, but when layers of a molecule called “coralyne” were inserted between layers of DNA, the behavior of the circuit changed drastically.

The current then flowed 15 times more strongly one way rather than the other  – the features of a diode or rectifier.

Dubi and his student, Elinor Zerah-Harush, constructed a theoretical model of the DNA molecule better understand the how the diode works.

“The model allowed us to identify the source of the diode-like feature, which originates from breaking spatial symmetry inside the DNA molecule after coralyne is inserted,” Dubi.