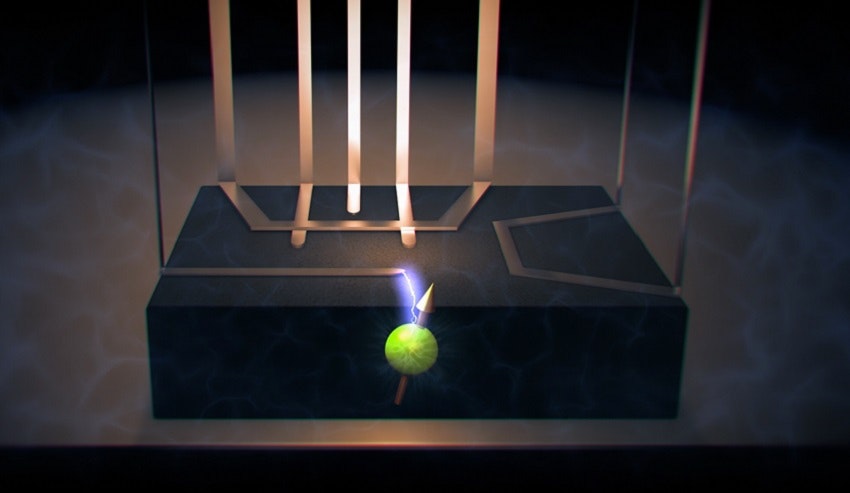 An artist’s impression of how a nanometre-scale electrode is used to locally control the quantum state of a single nucleus inside a silicon chip. Credit: UNSW/Tony Melov

Curiosity-driven research can yield exciting discoveries. The latest is an accidental breakthrough by Australian engineers that has unintentionally solved a 58-year old mystery in quantum science.

As described in the journal Nature, they have worked out how to do what Nobel Laureate Nicolaas Bloembergen first suggested in 1961 but no-one has yet cracked: control the nucleus of a single atom using electric rather than magnetic fields.

The discovery is a big deal.

It will simplify the control of individual atoms placed in nano electric devices, with implications for overhauling nuclear magnetic resonance – a technique used in a diverse range of fields such as modern physics, medicine, chemistry and mining.

Magnetic Resonance Imaging (MRI) machines, for instance, are used by hospitals to make three-dimensional images of the inside of a patient’s body without making any cuts, says lead scientist Andrea Morello from the University of New South Wales.

“It works by detecting the presence of hydrogen nuclear spins within the body,” he explains, “and it does so by applying pulses of oscillating magnetic fields.

“What we (re)-discovered is that a similar result can be obtained by using electric, instead of magnetic fields.”

Although this had been theoretically proposed decades ago, it turned out to be extremely difficult to apply in practice, “so it was effectively forgotten for half a century”, Morello says, until his team’s random stroke of luck.

Their research seeks to understand how the “classical” world we experience emerges from the microscopic quantum world.

“This experiment requires ‘kicking’ the nucleus with very strong oscillating magnetic fields, to make its evolution chaotic. But as we did so, we inadvertently damaged (like a fuse) the antenna that delivers these magnetic fields to the nucleus.”

The damaged antenna could then only produce an electric field. What surprised them was that the experiment still worked.

The big difference between electric and magnetic fields is how they spread out. Electric fields are produced by an electrode and decay very quickly, making them much easier to shield – think Faraday cage, says Morello – than magnetic fields, which spread out more.

“Our research involves controlling individual atoms at the nanometre scale, to build quantum computers and quantum sensors; being able to address the atoms by electric fields will give us a great advantage, because we will be able to localise the fields around each atom.”

He describes it like trying to move a ball on a billiard table – using magnetic fields would be like shaking the whole table, which will move all the balls and spoil the game.

“Doing it by electric fields, instead, is like being handed an actual stick, with which you can just hit the ball you want to move.”

Morello is excited about the potential applications, from understanding how the world we experience arises from the quantum realm to building sensors of electromagnetic fields with greater sensitivity.

“And all this, in a simple electronic device made in silicon, controlled with small voltages applied to a metal electrode!”