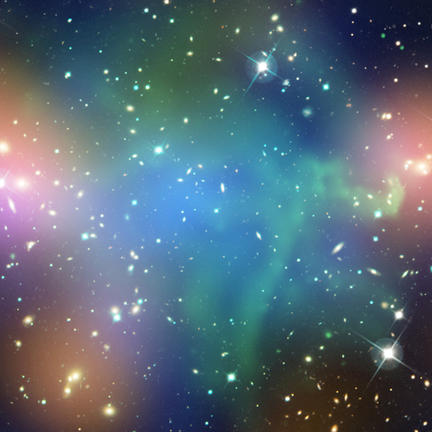 Let me begin by telling you that dark matter is real. The evidence is overwhelming. Without dark matter stars would escape their galaxies and galaxy clusters would come unbound.  Unfortunately the same clues that assure us that dark matter is real make it maddeningly hard to detect. As far as we can tell, dark matter doesn’t interact at all with electromagnetic radiation – so no emission of light, no absorption, and no scattering.

Dark matter appears to be some entirely new kind of particle that has mass, and therefore gravity, but otherwise interacts only via the (appropriately named) weak force. Even those interactions are rare. Dark matter particles ordinarily just pass right by each other, and right through everything else, without even slowing down. Dark matter’s gravity lets us know where it is, but gives us no handle on what it’s made of – for that, we need particle interactions.

So how do you detect something that doesn’t interact with anything? The possibility of weak force interactions, however rare, gives us hope. Direct detection experiments rely on the fact that rare weak interactions can occasionally allow a dark matter particle to bump into the nucleus of an atom. In some experiments, tanks filled with inert materials such as xenon are placed deep underground, shielded from cosmic rays. Sensitive detectors watch for tiny displacements of individual nuclei that could signal a collision. The results are perplexingly inconclusive.

But since all the evidence for dark matter so far comes from the cosmos, why not look there for clues? Most particles have an antimatter partner. When matter and antimatter meet, they annihilate, sometimes turning into pure energy. In many theories the dark matter particle is its own anti-particle – a weird and hugely advantageous property for an invisible particle to have. It means that once in a while two dark matter particles might collide and produce something we can see.

The aftermath – probably most often gamma rays or cosmic rays like electron-positron pairs – would both confirm the presence of dark matter and tell us what it’s made of. In other theories, instead of annihilating, dark matter might decay into visible particles, producing X-rays, or even transform itself into photons.

These tantalising possibilities have led to “indirect detection”. In principle we look for clear, predicted signals from the most likely places – the centre of our galaxy and dwarf galaxies. Since we don’t know what dark matter is, and annihilation or decay or photon-production could take many forms, virtually any unexpected radiation could be dark matter. If we see something we don’t understand, and the standard explanations don’t fit, why not try dark matter? Mostly the signal will be “merely” astrophysical, but if you hit the jackpot, a ticket to Stockholm is all but guaranteed.

And indeed mysterious signals abound. There’s the X-ray excess in galaxy clusters, possibly hinting at decaying neutrino dark matter. There are the unexplained positrons (anti-particles of electrons) picked up by several different space-based experiments – could they be from nearby dark matter annihilations? There’s the gamma-ray glow in the galactic centre, and in recent weeks, press releases have hailed observations of anomalous X-rays as evidence of exotic hypothetical particles known as axions streaming out of the centre of the Sun and converting to photons in the Earth’s magnetic field. Axions could be a totally different variety of dark matter, or not actually “the” dark matter, but just solar by-products that also happen to be dark.

Just what produces these unexplained sources of radiation is not obvious, but they can’t all be dark matter. And there is precedent for promising signals that ultimately disappoint. Some excesses disappear with more data and better statistics, others turn out to be exciting new astrophysics arising from frustratingly ordinary matter. So as much as we want to believe, we should take each new detection with a large grain of salt. The best path is to keep asking questions. We need consistency checks. If your dark matter model can explain the gamma-ray excess, what else does it produce? Should we see radio signals too? At what frequencies? What about neutrinos? What does the theory say we might see in colliders? What would it have done in the early universe?

Astrophysics is complicated. There’s a lot going on that we still don’t understand, and it will never be enough to say a signal must be dark matter because we can’t think of any other explanation. We need more theory, more data, and independent confirmation. Meanwhile, though, we might find the cosmos is more complex and wonderful than we ever imagined. And that’s a pretty good consolation prize.