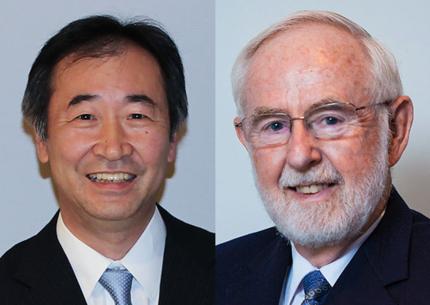 Japan’s Takaaki Kajita and Canada’s Arthur McDonald have won the 2015 Nobel Prize for Physics for their discovery that neutrinos have mass.

“The discovery has changed our understanding of the innermost workings of matter and can prove crucial to our view of the universe,” the Royal Swedish Academy of Sciences said in a statement awarding the 8 million Swedish crown ($US962,000) prize.

Neutrinos are created as the result of nuclear reactions. Until McDonald and Kajita’s discovery they were thought to be without mass. They studied neutrinos blasted out from the Sun and discovered they change en route to become muon-neutrinos and tau-neutrinos – something that can only happen if they have mass.

“Yes there certainly was a eureka moment in this experiment when we were able to see that neutrinos appeared to change from one type to the other in travelling from the Sun to the Earth,” Professor McDonald said.

The Nobel committee said the finding showed up cracks in the Standard Model – the prevailing theory that describes fundamental particles and how they interact.

“It has become obvious that the Standard Model cannot be the complete theory of how the fundamental constituents of the universe function.”

Kajita is director of the Institute for Cosmic Ray Research and professor at University of Tokyo, while McDonald is professor emeritus at Queen’s University in Canada.