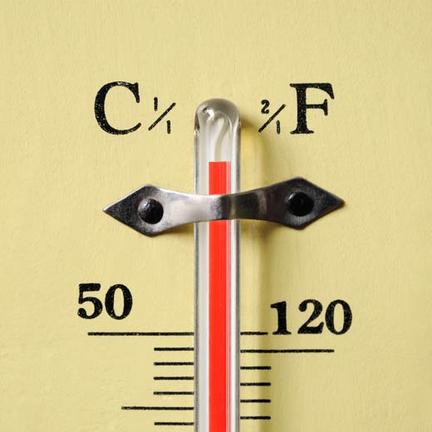 Atoms wriggle – they can’t help themselves. And the warmer they are, the faster they writhe. By using lasers to measure how fast atoms of the element caesium zip around a vacuum chamber, Australian scientists have shown they can calculate the sample’s temperature. The super-accurate technique could be adopted as the basis of a new definition for the standard unit of temperature, the Kelvin. The work was reported in Nature Communications in October.

The International Bureau of Weights and Measures has for decades sought to redefine the seven key units of scientific measurement – a group that includes the kilogram and the metre, as well as the Kelvin – based on fundamental constants. Traditionally, many such measurements have been based on a physical object. The definitive metre, for example, was a metal bar kept by the International Bureau of Weights and Measures in Paris. But that method of defining a metre was inconvenient for anyone trying to calibrate a metre ruler elsewhere in the world. Today the metre is defined as the distance light travels in a vacuum in  1/299,792,458 of a second  – a measurement many modern labs can carry out.

Like the metre, temperature has also traditionally been calculated using an arbitrary substance. Currently, the Kelvin is defined as 1/273.16 of the temperature at which water vapour, liquid and ice co-exist in balance at the same time. That temperature, known as water’s “triple point”, is 273.16K or 0.01°C (0 Kelvin is absolute zero, or 273.16°C). The difficulty with this definition is that the water used for the measurement must be a specific cocktail of hydrogen and oxygen isotopes known as Vienna Standard Mean Ocean Water. Only the Vienna-based International Atomic Energy Agency has the know-how to make it. (You can order 20 millilitres for $280.)

The definitive metre, for example, was a metal bar kept by the International Bureau of Weights and Measures in Paris.

An additional problem with the existing method for calibrating thermometers is that it necessitates sending the instruments to one of a handful of laboratories around the world, which are fitted out with special equipment to cool that special Vienna water to precisely the triple point. But shaking and jiggling in the post on a thermometer’s return journey can throw off its calibration ever so slightly.

So in November 2014, the International Bureau of Weights and Measures decided to redefine temperature using a universal law of nature called Boltzmann's constant, which describes the relationship between temperature and atomic motion. The speed at which atoms and molecules wriggle, Ludwig Boltzmann and his fellow 19th century physicists discovered, is controlled very precisely by their temperature.

In 2018, scientists will meet to agree on the most accurate way to measure Boltzmann's constant. That method will then be adopted as the new basis for defining the Kelvin.

Andre Luiten at the University of Adelaide and his colleagues propose to use lasers to measure the velocity of caesium atoms in a vacuum at room temperature. The technique capitalises on the way matter absorbs light – and how that changes depending on the object’s movement. An atom sitting still absorbs light of a certain wavelength, or colour. But as it moves towards or away from the viewer, the wavelength of light it absorbs shifts slightly, a phenomenon known as the Doppler effect. By measuring how much it shifts, Luiten’s team was able to calculate the atoms’ precise velocity – and hence the sample’s temperature.

Any laboratory with a suitable vacuum chamber and laser can replicate the study, and calibrate their thermometers using the precise temperature reading it provides, Luiten says – no special water needed. The technique is handy for laboratories that require accurate temperature measurements, such as those that develop technical alloys at temperatures of more than 1,000°C. (Such alloys are used to make components for aeroplanes and rockets, for instance.) “At the moment, that’s where traditional thermometers don’t work,” he says, because repeatedly heating and cooling a thermometer can cause it to become inaccurate by several degrees. For materials scientists fine-tuning their recipes, this can make all the difference.

Other researchers have tried the laser Doppler method, but with water or ammonia molecules instead of caesium. But, Luiten says, these gave messier results. The molecules are bigger, tend to move around more erratically and bump into each other. “And that leads to a fudge-factor in those experiments,” he says. “The good thing about our atoms is they’re dilute, they never collide, so we avoid that whole problem altogether.”

Not quite. Bernd Fellmuth, a physicist at the National Metrology Institute of Germany, says the frontrunner to define the Kelvin is a technique called acoustic resonance. By measuring the speed of sound through a cold cloud of pure argon gas, UK scientists in 2013 found the argon atoms’ average amount of kinetic energy. From this, they calculated Boltzmann's constant to just 0.7 parts per million.

Luiten says he is confident that by improving their measuring laser, his team will be able to match that accuracy. And in a few years’ time, when scientists meet to agree a new definition for the Kelvin, Vienna Standard Mean Ocean Water could be no more than a historical curiosity.