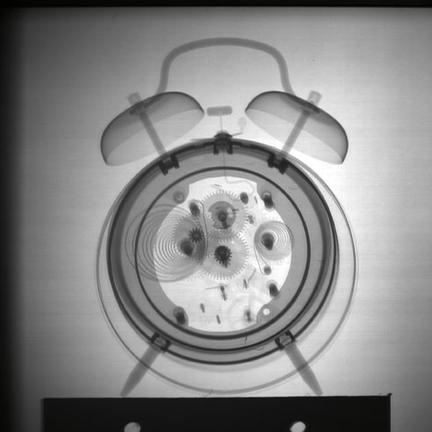 An image of the internal structure of an alarm clock which was used to calibrate Dingo. Credit: ANSTO

Aircraft engineers and palaeontologists might not seem to have much in common but both sets of scientists are set to reap the benefits of a new imaging instrument at the Australian Nuclear Science and Technology Organisation (ANSTO).

The instrument, dubbed Dingo, will rank among the best in the world for providing 3D and video images of the insides of objects, from rocks to engines, without having to cut them open first.

Dingo works by directing a stream of neutrons at an object and measuring the way that they absorb or scatter, which differs depending on what the object is made of. Unlike X-rays, which can only penetrate the few outermost micrometres of an object, neutrons can penetrate centimetres, revealing detailed information about the inner structure.

What sets the machine apart as one of the best neutron radiography instruments in the world is its high-intensity neutron beam, and a high-speed camera capable of capturing video of the inside of the object as it is scanned. One particularly useful application is to take 3D movies of the insides of running engines, explains Joseph Bevitt, scientific coordinator at ANSTO’s Bragg Institute where Dingo is housed.

“You can watch what’s happening inside an engine, see the combustion plume and how the fuel and air are mixing – you can’t do this any other way,” he says. This data can help engineers to improve the performance and efficiency.

The Dingo team is also receiving enquires from researchers wanting to image the inside of rocks suspected to contain fossils, says Bevitt. When archaeologists carve a fossil out of a rock, they generally keep the fossil but discard the rest and potentially lose a lot of extra information. “Many rocks contain within them the impressions of the skin, or soft tissue such as ligaments, or feathers.”

Using neutron tomography, all that extra information is captured. It can even detect the faint outline of the brain inside a fossilised skull, which provides valuable data to compare ancient animals’ brain size.

After a three-month test and calibration process, Dingo will be available to researchers at the end of the year.

It is the tenth instrument to run on the steady stream of neutrons generated by ANSTO’s new research reactor, OPAL, which turned five this year (COSMOS, issue 50, p82). With at least four times the neutron-generating capacity of ANSTO’s previous reactor, the now-decommissioned HIFAR, OPAL has rejuvenated Australia’s neutron imaging capabilities.

Of the other ANSTO instruments already up and running on OPAL neutrons, Kowari is generating some of the biggest buzz. Kowari measures stress and strain inside materials, providing vital information for researchers assessing the performance of 3D-printed complex engineering structures.

Cars, aeroplanes and medical devices could all soon contain metal parts printed out on these machines, formed into intricate shapes that couldn’t be made any other way. The key outstanding question for manufactures is to establish whether these printed pieces will be strong enough for their task.

“People have been investigating 3D printing of metals for a long time, but only now have they come far enough that they can start to quality-test these things,” Bevitt explains. “Kowari is used to looking at the internal stress inside these materials, which you need to measure to understand where cracks will form and whether they will have the correct mechanical properties.”

Armed with Kowari data, researchers should soon be able to establish the best printing process for different kinds of applications, from aeroplanes to medical implants, and 3D printing will truly have arrived.