Home ■ Core Sciences ■ Physics ■ How to make a superheavy element 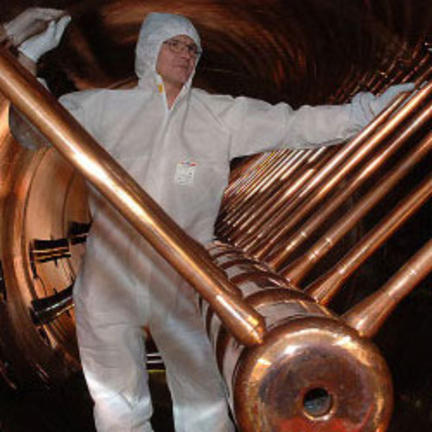 Just when you thought you had memorised your periodic table, scientists have extended it by one more box. Researchers have just confirmed the creation of a new chemical element, provisionally known as ununseptium.

Fabricating matter at the extreme end of the periodic table – by smashing the nuclei of lighter elements together and hoping they stick – is no mean feat, but two independent research teams have caught brief glimpses of element 117. Stuffed with its 117 protons, it is the heaviest element yet confirmed.

It’s unlikely that extreme elements like 117 will ever have direct, practical uses – ununseptium falls apart in milliseconds. But probing the limits of matter helps us better understand how atoms are put together, and what keeps them from falling apart.

Element 117 was first spotted in 2010 at the Joint Institute for Nuclear Research in Dubna, Russia, by Yuri Oganessian, who has had a hand in making many of the superheavy elements produced so far. However, the International Union of Pure and Applied Chemistry, the body that oversees the addition of new elements, requires independent confirmation. And that’s what an international team – including scientists from the Australian National University – has just provided in a paper published last week in Physical Review Letters.

One of the most popular ingredients for creating
these atomic behemoths has been calcium-48.

The challenges in creating superheavy elements are extraordinary. Fusing atoms is exactly the opposite of what happens naturally – the bigger an atomic nucleus, the more likely it is to spit out protons, decaying into more stable lighter elements. Conventional nuclear physics suggests that once you get to about lawrencium, with 103 positively charged, mutually repulsive protons crammed into the nucleus, the atom should be so unstable as to decay almost immediately.

But nuclear physics is never simple. While the mutual repulsion of protons continually threatens to tear large nuclei apart, there are curious quantum mechanical effects that entice protons and neutrons to fill so-called shells, with full shells lending greater stability.

This means atoms with certain “magic” numbers of protons and/or neutrons are more stable than they would be otherwise. In the late 20th century, many nuclear physicists speculated that these magic numbers might imply an “island of stability” at the far end of the periodic table. Element 117 might be getting close to this island.

One of the most popular ingredients for creating these atomic behemoths has been calcium-48, a rare isotope of calcium with 20 protons and 28 neutrons in its nucleus. It is perfect for the job. It has a lot of neutrons for such a light element and it is very stable, as it benefits from “double magic”, having a magic number of both protons and neutrons.

The Dubna team partnered with the Oak Ridge National Laboratory in the US to make the first atoms of element 117 in 2010, and now a German team has repeated the trick.

There are several theories that predict where the magic
numbers might lie for deformed nuclei.

The Bk-249 was painstakingly forged over 18 months at Oak Ridge then swiftly shipped to Germany. The scientists had to work fast – with every passing day the Bk-249 would decay further.

The berkelium was taken to the GSI Helmholtz Centre for Heavy Ion Research in Darmstadt, and bombarded with around 1019 (ten billion billion) Ca-48 nuclei. Eventually a grand total of four atoms of element 117 were created – not a huge strike rate, but enough to confirm the element exists.

The achievement represents even more evidence that we are approaching the shores of, or are even on, the “island of stability”, where magic numbers of protons and neutrons hold over-stuffed nuclei together. Exactly where their stabilising effects might peak is hazy. Whereas lighter elements have neatly spherical nuclei, superheavy nuclei literally bulge with protons and neutrons. And when their shape changes, so too do the magic numbers that can lend extra stability.

There are several theories that predict where the magic numbers might lie for deformed nuclei, but only experimentation will reveal them for sure. So how far might the island of stability extend? Element 118 has already been spied – but not yet confirmed. And according to David Hinde, director of the heavy ion accelerator facilities at ANU, who contributed to re-creating element 117, it should be possible to push further. “I think we can get to 120,” he said.

However, he warned that going above 118 presents new challenges. Calcium-48 simply doesn’t have enough protons for the job, for example. So Hinde and his team are working on new, heavier projectiles with titanium and chromium as prime candidates.

Where is the limit of matter? No one knows. But there must be a ceiling somewhere, says Hinde. “To be honest, I think it will be at element 120, unless we have some breakthrough in understanding.”