Home ■ Core Sciences ■ Physics ■ How fast can a human cycle? 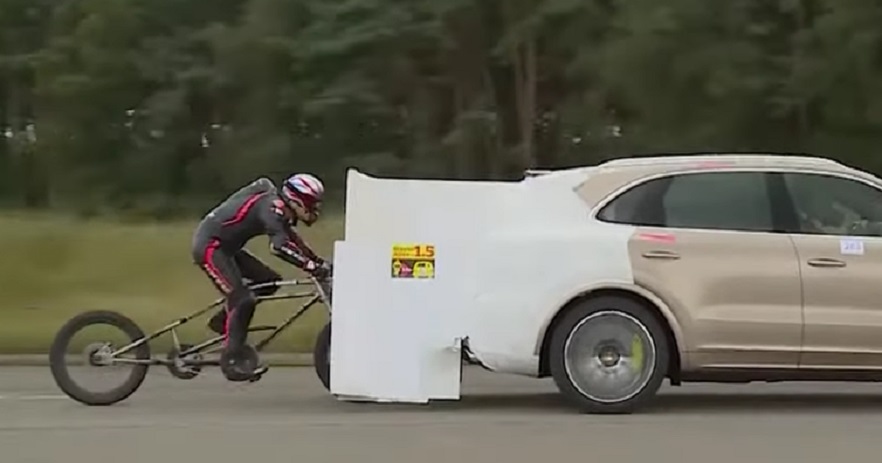 With aerodynamics out of the equation, it’s possible to go really, really fast. Credit: YouTube/Euronews

British cyclist Neil Campbell recently set a new record for the men’s “fastest bicycle in a slipstream”, clocking up a breathtaking 280km per hour.

This record involves bringing a cyclist up to speed in the wake of a towing vehicle, then releasing the bike and timing the rider over a 200m distance. The overall record stands at 296km per hour, set in September 2018 by Denise Mueller-Korenek, who was towed by a dragster on Utah’s Bonneville Salt Flats.

But just how much can these high cycling speeds can be attributed to human performance? Does it take a supreme athlete to maintain that speed after release, or is the vehicle really doing all the hard work? And if so, does that mean even faster records are possible?

By considering the energy supply and demand involved in Campbell’s new men’s record, we can begin to appreciate the relative contributions from human and machine. For this record, energy comes from both the car’s fuel combustion and from human power.

The power required to maintain a given speed depends on the resistive force acting against the rider’s forward motion. On a flat course at a constant speed, there are two key components:

Benjamin Thiele, lead systems engineer of the Monash Human Power Team at Monash University, explains it like this:

Basically, if you want to cycle fast and you had the option to exclude one of the resistive forces from the physics, you would be wise to remove the aerodynamic component.

To put this in context, in elite level track cycling (where there are obviously no cars to hide behind!), aerodynamic drag typically accounts for about 95% of the total resistive force.

Thus the towing vehicle in Campbell’s record attempt helped him in two crucial ways. First, it brought him up to speed, thus reducing his energy expenditure during acceleration.

Second, the car’s slipstream attachment (basically a cross between a spoiler and a tent, behind which Campbell positioned himself during the ride) removed much of the aerodynamic resistance that would otherwise become insurmountable at such dizzying speeds.

By riding in the vehicle’s wake, the rider will experience both low relative wind speeds and low aerodynamic resistance. In fact, if the rider is positioned correctly, the air flow in the car’s wake can actually generate a propulsive aerodynamic force – effectively, the vehicle “drags” some air behind it, and the rider can thus be sucked along with it.

What about the physical demands of maintaining that speed after the tow release? This primarily depends on the size of the gear being used, and of the rolling resistance that needs to be overcome. By my calculations, and assuming aerodynamic drag behind the tow car is negligible, hitting 300km per hour (the next big milestone for both the mens’ and womens’ slipstream records) would require the rider to maintain a power output of 600-700 watts for the 2.4 seconds it would take to ride through the 200m time trap.

This seems achievable enough, given Tour de France riders can put out more than 1,000W for a full minute or more.

So the tow vehicle is really the crucial factor, rather than the rider’s physical performance. In fact, if the rider were to pull out of the slipstream after being towed up to 300km per hour, the energy demand to maintain this speed would be on the order of 100 kilowatts – roughly the performance of a high-powered motorcycle!

What about unassisted cycling records?

Given the crucial importance of overcoming aerodynamic drag, it’s no surprise elite cycling teams invest so much into aerodynamics research and development.

In fact, the aerodynamics of conventional bicycles and riding positions are far from optimal. This is evident when we compare speeds achieved on conventional bicycles with those of a “faired recumbent human-powered vehicle”. This is a modified bicycle on which the rider lies down in a recumbent position, with the pedals at the front, inside an aerodynamic covering called a fairing.

The speed record for such a vehicle over a 200m distance currently stands at 144km per hour. This is about twice as fast as peak speeds achieved during velodrome sprints on a conventional track bicycle.

David Burton, manager of Monash University’s wind tunnel research facility, says elite cycling has “already exhausted the low-hanging fruit when it comes to gaining a competitive advantage through aerodynamics”, given the rules and constraints of the sport in terms of equipment design and rider position.

But he adds there are still some high-tech research avenues to improving performance, including “advanced experimental testing techniques and highly resolved numerical simulations of the flow fields around cyclists”.

As we have seen above, there is probably still the potential for even greater speeds when it comes to slipstream-assisted cycling. I suggest it’s within the realm of current elite-level human performance to achieve speeds approaching 400km per hour when enveloped in the wake of a vehicle.

Perhaps the challenge ultimately then becomes a psychological one: would anyone dare attempt it?