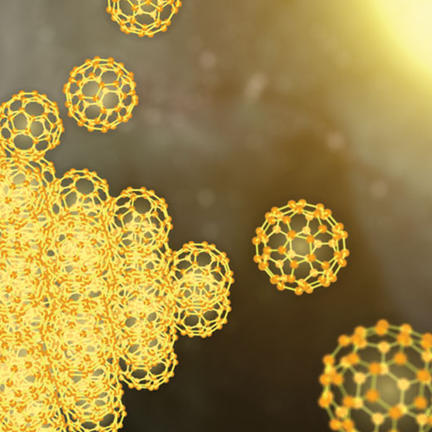 The carbon atoms we are made from arrived here from the stars – and chemical physicist John Maier and his team at the University of Basel have now shown these carbon atoms could have travelled here as the soccer ball shaped molecules known as buckyballs. They published their findings in Nature in July.

Maier and his team have shown that buckyballs float free in space and are remarkably resilient interstellar travellers. Could buckyballs be responsible for the carbon atoms that form the basis of organic life? “Undoubtedly!” Maier says. “We came from the stars and we can end up in new stars – and it could very well be that we go via buckyballs.”

English chemist Harry Kroto was one of a team of researchers who first made buckyballs in the lab, earning the 1996 Nobel prize for Chemistry. He says he couldn’t be more pleased by the finding: “I think it’s really exciting!”

What could be tough enough to survive constant exposure to cosmic rays?

Kroto and his collaborators made buckyballs when they were investigating whether complex carbon molecules float around in interstellar space. Buckyballs emerged when the scientists recreated the conditions found in dying stars known as red giants. The spherical carbon molecules were named after the American architect Buckminster Fuller (their full name is buckminsterfullerenes) because they resemble his design for geodesic domes.

Kroto and co. were attempting to solve a puzzle first identified by American astronomer Mary Lea Heger. In 1919 she spied an oddity in her telescope data – two wavelengths of starlight that were consistently dimmer than the rest.

Heger had stumbled upon a “diffuse interstellar band” – specific wavelengths of starlight that are blocked on their way to Earth. More than 400 have been identified since. Whatever is blocking the starlight has since confounded chemists and astronomers.

As different molecules only absorb specific wavelengths of light, each diffuse interstellar band is the signature of a molecule floating in deep space. But what could be tough enough to survive constant exposure to cosmic rays? Maier, for one, suspected buckyballs. The carbon molecules are super-stable due to their spherical structure.

To test his hypothesis Maier first had to determine which wavelengths of light buckyballs absorb – their absorption signature – then compare these to the diffuse interstellar bands. For 20 years he experimented with recreating space conditions in the lab – the frigid near-vacuum that lies between stars – because the absorption signatures of buckyballs are influenced by the pitiless conditions in space. Maier and his team finally managed to design a chamber with an almost complete vacuum of -268 °C, or five degrees above absolute zero. They then vaporised buckyballs by pinging them with electrons and then injected them into the chamber, recreating the charged gas that is suspected to exist in space.

When the researchers shone light through the gas and measured the wavelengths the super-cooled buckyballs intercepted, they found two of the absorbed wavelengths perfectly matched two of the diffuse interstellar bands. Kroto was impressed that the problem was finally solved. “I actually didn’t think I would live to see the day,” he said.

Buckyballs are not indestructible. In space they will eventually disintegrate if they are exposed to enough molecule-destroying cosmic radiation. But Kroto says they are “the best candidate to go through no-man’s land and not get blown up by the landmines of the radiation field”.