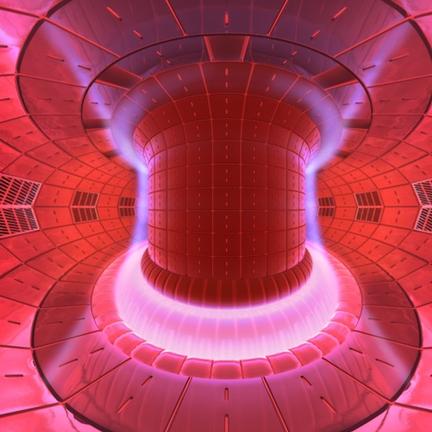 Fusion power is such a huge, potentially game-changing technology that it’s easy to get swept up in its utopian promise. Equally, it’s easy to dismiss the whole shebang as a wild fantasy that will never come to pass.

Here’s what you need to know to help keep pace with developments in this global quest.

What is nuclear fusion?

Atoms are the really small bits from which we are all made. Inside each atom, when you strip away the shells of electrons, is an even smaller bit at the core – the nucleus.

It turns out that when you join two small nuclei to make a bigger one, an enormous amount of energy is released – about 10 million times more energy than the puny chemical reactions that power most of our technology, such as burning oil, coal or the gasoline in your car.

We know fusion works because it goes on in the core of the Sun. All the Sun’s heat and light are powered by fusion. The most important reaction is the fusion of two nuclei of hydrogen, which is the lightest atom, combine to form helium, the second lightest.

Igniting nuclear fusion is not as simple as starting a fire. It takes a lot of energy to get it going and typically, that means a temperature of millions of degrees Celsius.

This is because atomic nuclei have a love-hate relationship.  Each nucleus has a strong positive charge so they repel one another. To kickstart fusion, you have to overcome this repulsive barrier by ramming two nuclei together incredibly hard. That’s what happens in the core of the Sun, where the temperature is about 15 million °C and pressures are similarly insane.

When the nuclei get close enough to touch, the nuclear strong force takes over – the strongest force in nature – and it’s the source of fusion energy.

The idea of fusion energy is to build power plants that generate energy by recreating the core of the Sun. Hundreds of research scale reactors have been built around the world.

They are usually engineering marvels designed to containment hydrogen nuclei at a 100 million °C, or implode a nuclear pellet using massive lasers (see below).

But I thought we already had nuclear power

The nuclear power plants we have so far are based on a different process – nuclear fission, where you derive energy by splitting one big atom into two smaller atoms. That’s a much easier process and so fission reactors have been pumping power into the grid since the 1950s.

Fusion reactors are much safer than traditional fission reactors because there is no chance of a runaway explosion and when the reaction is done, there’s no long-lived radioactive waste.

The first generations of fusion reactors will likely use two forms of hydrogen for the fuel – deuterium and tritium – because the fusion of these two nuclei is the easiest to achieve.

Deuterium is easily found in seawater, while tritium can be generated from lithium.

The long-term goal is to switch to a deuterium-deuterium reaction, meaning all the world’s energy supply could one day be found in seawater.

Has fusion ever been achieved?

Humans first managed nuclear fusion on 1 November 1952 when the US exploded the first fusion bomb. Fusion bombs (also known as hydrogen bombs) are the most destructive weapons ever made. They typically use a fission-based atomic bomb to trigger a fusion reaction in the second stage.

The challenge now is achieving fusion in a controlled manner.

For more than 70 years researchers have been trialling different designs for containing the fusion reaction. Some of these designs (see below) have achieved fusion. The problem is releasing more energy than is put in, and doing it long enough to be useful. Nobody’s been able to do that yet.

What’s been holding us back?

Ah. The problem is the temperature.  You have to heat the fuel to such a high temperature (100 million °C or so) that no material vessel could possibly contain it.

The basic physics behind fusion has been known for decades. It’s the engineering that still needs to be worked out.

Fusion reactors come in all sorts of shapes and sizes.

Most research has looked at containing the reaction within a sort of magnetic bottle. At the extreme temperatures of fusion, all of the electrons are stripped off the deuterium and tritium atoms, and what’s left is called a plasma.

The most common design is the toroidal chamber-magnetic (tokamak), which looks a bit like the inside of the Deathstar. Tokamaks form twisting donut-shapes called a torus. The plasma runs in rings and never touches the walls of the torus because it’s contained by the magnetic fields.

Other variations confined the plasma in different geometries, such as the stellerator design which adds a twist with a different configuration of magnets. Other tokamak designs are spherical.

But if fuel is squeezed in a magnetic field, how do you get the energy out?

When deuterium fuses with tritium, an extra neutron is kicked out and receives a huge kick of energy. The neutron is a neutral particle, and so is not affected by the magnetic field – it can fly through the magnetic bottle and smash into a lithium blanket just inside the donut.

The neutron collisions heat up the lithium. This heat is used to convert water into steam which drives turbines to generate electricity, just like in any other electric power-plant.

What’s this about using lasers?

Instead of using a magnetic field to contain a plasma, another idea is to ignite small fusion explosions by firing a powerful laser at a pellet.

At the National Ignition Facility at Lawrence Livermore National Laboratory in California, the world’s biggest laser (made of 192 laser beams) are fired simultaneously at a pellet of deuterium/tritium about the size of a pea.

National Ignition Facility researchers have achieved fusion using this design, but the challenge is extracting more energy than is used to power the lasers. Their biggest problem is in constructing the pellet and its plastic container in the shape to absorb all the laser energy.

This is the idea to make a fusion reactor that works at close to room temperature. In 1989, British and American scientists seemed to achieve this a running a strong current through a platinum electrode in a thermos of heavy water (water where the hydrogen atoms are partially or completely replaced by deuterium) – but the experiment turned out to be flawed.

Nowadays research into cold fusion is seen as an example of "pathological science", like trying to build a perpetual motion machine.

Best forget about this altogether. It’s not going to happen.

What’s next for fusion?

Despite the difficulties, progress in fusion power has actually been very rapid. Power output has increased by a factor of more than a million in 30 years.

Much of the hope is centred on the ITER (Latin for "the way") tokamak to be constructed in southern France by 2019.

This design has been in the pipeline for two decades and is designed to be the first fusion reactor to produce more energy (about 10 times more) than it puts in. However, this 500-megawatt reactor is still only a proof-of-concept design, and no electricity will be generated.

If ITER is successful, the next step is DEMO – which is designed to be the world’s first nuclear power plant to generate electricity, to be constructed by 2033.

Note: this article incorrectly stated that the National Ignition Facility is at the Lawrence Berkeley National Laboratory and the ITER was due for completion in 1919. These errors have been amended.