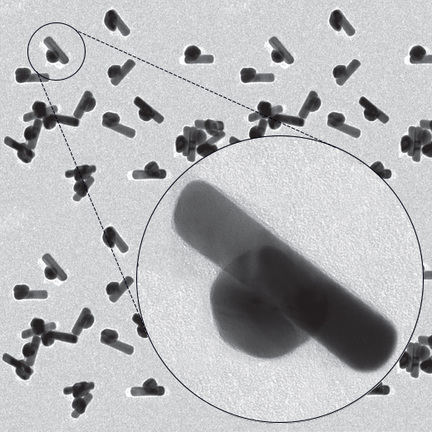 Black just got a whole lot darker. Researchers from Saudi Arabia’s King Abdullah University of Science and Technology created a material that absorbs up to 99% of visible and infrared light. And it was inspired by a bright white beetle. The recipe for the new black was published in October in Nature Nanotechnology.

Black coatings have practical applications, from helping solar heaters capture more energy from sunlight, to capturing stray photons bouncing around inside powerful telescopes, to enabling military stealth technology. But the best black paints only absorb around 90% of visible light striking a coated surface. To improved on that number, materials scientists have looked to “structural darkness”: nano-structured coatings that trap almost every photon that strikes them.

In recent years, researchers have created ever-darker materials using carbon nanotubes, tiny cylinders made of carbon sheets just one atom thick. Last year, a British company unveiled Vantablack, a material that absorbs more than 99.9% of visible light. Vantablack’s carbon nanotubes stand straight up like bundles of tiny straws 22-44 microns high, forming a coating about half the width of a human hair. Photons are captured between the nanotubes and bounce around until their energy becomes heat.

But Vantablack works better capturing light from some angles than others. Also, the nanotubes need to be heated to 400° C to form. That takes a lot of energy, and means they can’t be coated on to materials that would be damaged by intense heat. Was there a way to make a coating that absorbed photons from all angles, and didn’t require heating?

Could an absolute black material – that, like a black hole, would swallow

As many materials scientists have done before, senior author Andrea Fratalocchi looked to nature for inspiration. He considered the brilliant white Cyphochilus beetles of southeast Asia. Their outer scales, overlaid like roof tiles, are only five microns thick. But they provide the brightest white known for that thickness. The beetles are far brighter than white paper – which is 10 times as thick – and brighter than any artificial white. Perhaps the beetles, so good at scattering light from all angles, could inspire a new way to make a blacker black.

In 2007, Italian and British scientists showed the beetle’s scales were filled with long thin threads of a tough substance called chitin, a common component of insect and crustacean exoskeletons. Whereas Vantablack nanotubes stick straight up, the chitin threads lie parallel to the beetle’s body.

The threads are closely packed, just like the carbon nanotubes in Vantablack. But whereas carbon nanotubes are all the same width, the chitin threads are slightly tangled and of different thicknesses. This random bramble, which researchers call “disorder”, gives the beetle its brilliant whiteness. The reason is that photons of all wavelengths hitting the chitin filaments from any direction will bounce off the material, scattering equally in all directions. When all wavelengths of light are mixed together, the result is perceived as white.

Fratalocchi wondered: could he borrow this idea of disordered structure to produce the blackest black?

To do it, his team needed to design a disordered porous material that soaked up all photons like a sponge. They started with hollow nanoscale rods, 80 nanometres long, made of gold. When mixed with the right chemicals, the nanorods can each grow one perfect gold 30-nanometre sphere, somewhere along their length, like a nodule on the rod’s surface. These spheres were the key to creating the disorder Fratalocchi and his team sought.

Under a microscope, the spheres are punctured all over with tiny pores – one-way valves for light. When a photon funnels through a pore, it bounces around the inside of the sphere until it reaches the spot where the sphere meets the rod, known as the “kissing point”. Once the photon crosses the kissing point to enter the hollow rod, there’s no coming back out – the trapped photons bounce around inside it until all their energy has dissipated as heat.

Because the pores are arranged randomly on the surface of the spheres – disordered, like the Cyphochilus beetles’ chitin threads – the material absorbs light equally well from all angles. The researchers found the nanoparticles effectively absorb wavelengths of 400-1,400 nanometres – visible light, plus some infrared. While Vantablack absorbs slightly more in the visible spectrum, this new material extends into the infrared, which could make it handy for painting the inside of infrared telescopes.

For efficient solar heating – which typically involves using sunlight to heat water, either for domestic use or even to drive a turbine to generate electricity – the traditional sunlight-absorbing material has been black silicon, which absorbs up to 92% of light, says Yuerui Lu, a materials scientist at the Australian National University who works with black nanostructures. But he says the new nanomaterial is an “exciting breakthrough”. Its broader spectrum of light absorption and stronger absorbing power could make it a contender for these applications.

The gold nanoparticles are easy to make and can be diluted in liquid and sprayed on a surface – no heating to extreme temperatures is required.

Could an absolute black material – that, like a black hole, would swallow 100% of photons striking it – ever be a reality? It would be difficult, if not impossible, says Yu-Han, a co-author of the study. “Although there is no theoretical limit to the absorption power of our material, surface roughness produces unwanted reflections,” he says. So Han has to be satisfied with having made one of the darkest materials on Earth, and leave black holes with the title of darkest objects in the Universe.