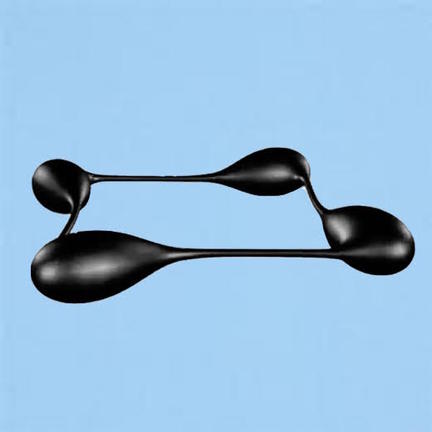 Poor Einstein. Where gravitational waves created by two black holes just gave us a massive proof for the physicist’s theory of general relativity, that theory could be broken – by another black hole.

Using supercomputers, a group of UK scientists have just created a black hole that defies Einstein’s theory. Admittedly, this hole is really a ring, and had to be simulated in five dimensions.

Theoretical physicists have long argued over whether “naked singularities” could exist.

Your average singularity – gravity so intense space and time break down – is predicted by Einstein’s theory of relativity to occur at the core of every black hole. But the theory’s equations only hold up if that singularity is tucked in by an event horizon – the “point of no return” where no light or matter can escape from the black hole’s gravitational tug. This rule is known as “cosmic censorship”.

If a singularity could exist outside of an event horizon, it would be a visible representation of an object collapsed to an infinite density, as light would no longer be sucked away from around it.

At the same time it would break the known laws of physics. Now that’s something worth seeing.

The scientists simulated Einstein’s complete general relativity theory in five dimensions using supercomputers, to see if it would be possible to create a naked singularity.

They modelled a black hole bizarrely shaped like a thin ring. If the ring was thin enough, the simulation showed, instead of collapsing into a black hole sphere, the ring wobbled and “bulges” connected by strings formed along it.

As the strings became thinner with time, they eventually became so thin they pinched off – how a thin stream of water from a tap breaks into little droplets. The bulges then broke off as a series of miniature black holes, forming a naked singularity at the pinch points, the authors say.

Not convinced a 5-D black ring is possible in the first place?

This is extreme theoretical physics so, in one sense, anything goes, but probing many dimensions is legitimate enough – general relativity never specified how many dimensions there are in the Universe, even though we can only directly perceive three. Add the fourth dimension, time, and you end up with spacetime. But according to some branches of physics, such as string theory, the Universe could be made up of as many as 11 dimensions.

“We’re pushing the limits of what you can do on a computer when it comes to Einstein’s theory,” said Tunyasuvunakool. “But if cosmic censorship doesn’t hold in higher dimensions, then maybe we need to look at what’s so special about a four-dimensional universe that means it does hold.”

The work was published in Physical Review Letters.