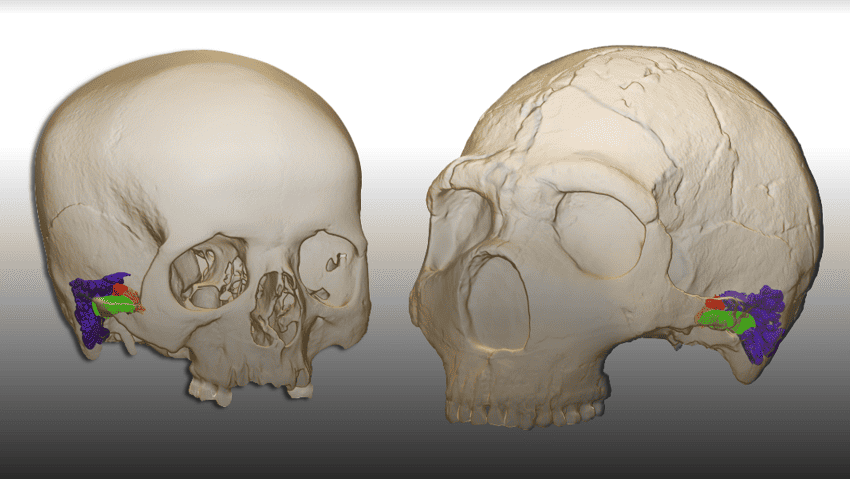 3D model and virtual reconstruction of the ear in a modern human (left) and the Amud 1 Neandertal (right). Credit: Mercedes Conde-Valverde.
More on:
linguistics

The closest ancestor to modern humans – Neanderthals – were capable of understanding and producing human speech, according to a new study published by an international team in the journal Nature Ecology and Evolution.

“This is one of the most important studies I have been involved in during my career,” says anthropologist Rolf Quam, of Binghamton University, US. “The results are solid and clearly show the Neanderthals had the capacity to perceive and produce human speech.

“This is one of the very few current, ongoing research lines relying on fossil evidence to study the evolution of language, a notoriously tricky subject in anthropology.”

The evolution of language, and the linguistic capacities in Neanderthals in particular, is a long-standing question in human evolution. The new study has reconstructed how Neanderthals heard to draw some inferences about how they may have communicated.

The study relied on high-resolution CT scans to create virtual 3D models of the ear structures in Homo sapiens and Neanderthals. Data collected on the 3D models were entered into a software-based model to estimate hearing abilities up to 5 kHz, which encompasses most of the frequency range of modern human speech sounds.

In addition, the researchers were able to calculate the frequency range of maximum sensitivity, technically known as the occupied bandwidth, in each species. The Neanderthals show a wider bandwidth compared with their ancestors from Atapuerca, again more closely resembling modern humans in this regard.

“This really is the key,” says study lead author Mercedes Conde-Valverde, of the Universidad de Alcalá, Spain. “The presence of similar hearing abilities, particularly the bandwidth, demonstrates that the Neanderthals possessed a communication system that was as complex and efficient as modern human speech.”

The team behind the study has been developing this research line for nearly two decades, and is continuing work with other collaborators to extend the analyses to additional fossil species. For the moment, however, they’re soaking up the pleasure of their new findings.

“These results are particularly gratifying,” says Ignacio Martinez, also from Universidad de Alcalá. “We believe, after more than a century of research into this question, that we have provided a conclusive answer to the question of Neanderthal speech capacities.”

Originally published by Cosmos as Neanderthals were capable of human speech