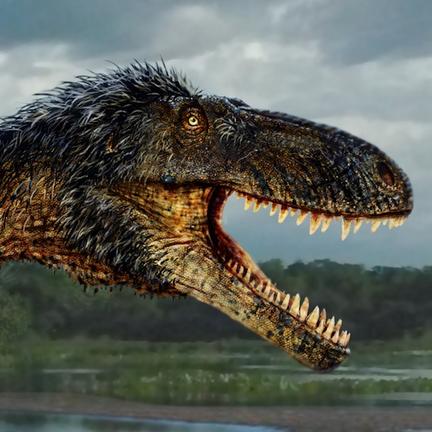 Cunning Tyrannosaurus rex giants may have once ruled on land, but how they climbed to the throne has puzzled scientists. Now, an international team of researchers reveal the discovery of a new tyrannosaur species which suggests that it was brains – not brawn – that shot the dinosaur to the top of the food chain.

Scientists announced last week how climate change and slow evolution led to the ichthyosaur’s demise in the oceans 90 million years ago. This week, researchers reveal a new tyrannosaur species that, around the same time, won its game of thrones on land.

A nimble pursuit hunter with long legs, the Timurlengia was horse-sized and sported a set of blade-like teeth, perfect for carving up meat.

But what made this tyrannosaur likely stand out from the pack was brainpower.

The team reconstructing the Timurlengia brain using CT scans of a part of the skull called the braincase. They discovered that even though Timurlengia hadn’t achieved the size of a T. rex, this tyrannosaur had already evolved its cousin’s characteristic brain and sensory features.

“Tyrannosaurs had to get smart before they got big,” author Steve Brusatte from the University of Edinburgh explained. “Only after these ancestral tyrannosaurs evolved their clever brains and sharp senses did they grow into the colossal sizes of T. rex.”

“The ancestors of T. rex would have looked a whole lot like Timurlengia, a horse-sized hunter with a big brain and keen hearing that would put us to shame,” Brusatte added.

The Timurlengia fossils were dated to the late Cretaceous, only 10 million years before the first fossil sighting of a T. rex. This indicates tyrannosaurs went through a fast growth spurt in evolution, likely given a boost by their improved senses and upgraded hunting abilities, the scientists argue.

The authors admit the discovery of the Timurlengia fossils remains a single snapshot of what they refer to as a “murky interval” in dinosaur history.

Future discoveries, they hope, will clear up exactly how these creatures evolved to be one of the most feared predator kings in Earth’s history.

The discovery was published in Proceedings of the National Academy of Science.