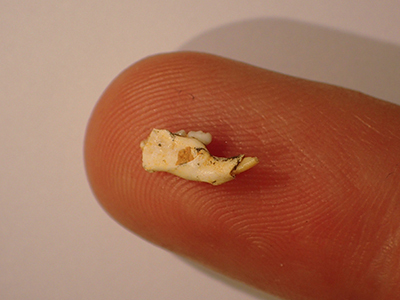 A palaeontologist and a caving guide have been honoured by having two newly discovered species of long-extinct mice named after them.

The mouse fossils are not only exciting finds per se, but will also help a team of scientists led by Jonathan Cramb in their quest to map environmental and climate changes in the region over deep time.

“Caves are great places for the preservation of fossils, partially because they’re natural traps that animals fall into, but also because they’re roosting sites for owls and other flying predators,” says Cramb. “Owls are exceptionally good at catching small mammals in particular, so the cave floor beneath their roosts is littered with the bones of rodents and small marsupials. “The accumulation of bones build up over time, providing us with a record of what species were living in the local area, which can stretch back hundreds of thousands of years.”

The species found at specific depths in these ancient, subterranean ossuaries provide direct clues to the environment that existed during their lives. Many types of small mammals are tightly adapted to diets derived from specific plant assemblages, so their presence or absence indicates the nature of the ecosystem – and, by inference, the climate – at any given time.

“Our findings show that the caves around Mount Etna had gone through a period of local extinction of rainforests, which were replaced by dry to arid habitats less than 280,000 years ago,” Cramb explains. “My colleagues and I wondered if the same environmental change happened elsewhere in Queensland, which is why we were searching the caves near Chillagoe.

The new species are detailed in the journal PeerJ.