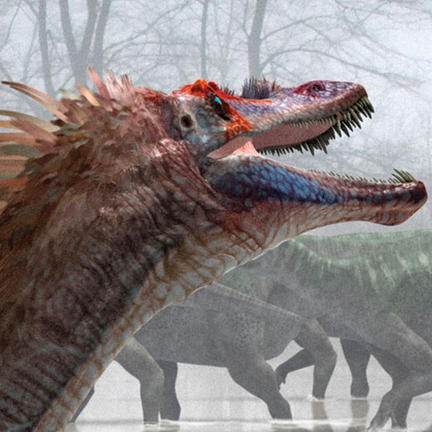 Until now, dinosaur fossils imprinted with soft tissue remains have been rare and highly prized. But a new study suggests the dusty old bones held by many museums may contain previously undetected traces of dinosaur blood.

Sergio Bertazzo and his colleagues at the Imperial College London have re-analysed a set of 75 million year old dinosaur fossils using a scanning electron microscope. They discovered blood cell and collagen-like structures inside several bones. The findings, reported in Nature Communications, suggest many other ancient fossils could also contain such traces – and may even allow scientists to track how dinosaurs evolved into birds.

“I hope this study will push more people to pick up bones in their collections and just look inside them using electron microscopy,” says Martin Kundrat, vertebrate paleontologist at Sweden’s Uppsala University.

Bones alone can only tell us so much about dinosaurs. Scientists need feathers, skin, muscles, blood and the molecular building blocks inside them to understand dinosaur physiology and metabolism. But so far, these tissues have only been found in exceptionally well-preserved fossils. North Carolina State University paleontologist Mary Schweitzer’s landmark 2005 discovery of collagen in fossilised Tyrannosaurus rex bones was “once in a lifetime – we had an entire year where every day was like Christmas”, she says.

Schweitzer’s discovery was so unexpected she spent years amassing evidence to convince doubters the organic matter detected in the T. rex fossils really was collagen, and not bacteria, fungi or other contaminants that invaded the bones after the dinosaur died.

It now turns out these tell-all tissues could be far more common than we thought, thanks to Bertazzo and his colleague Susannah Maidment’s discovery.

By day, microscopist Bertazzo is a cardiovascular disease researcher. He met paleontologist Maidment at an Imperial College career-building meeting. The two got talking about collaborating on dinosaur bones. Bertazzo was interested to see what happened inside the bones during fossilisation.

So they asked London’s Natural History Museum for dinosaur bone samples. Six months later they received a few crumbling specimens – scrappy claw, toe and limb samples that weren’t particularly well preserved. “They were worried I would destroy them,” says Bertazzo.

He put the specimens under the scanning electron microscope, which uses a beam of electrons to create an image of a specimen. The electrons interact with atoms in the sample, producing signals that contain information about the sample’s composition. The microscopes are large, expensive pieces of equipment that require specialist operators.

While examining the specimens, Bertazzo was surprised to see some familiar shapes from his cardiovascular research – small red blood cell-like structures, 50 times smaller than the width of a human hair, inside the crevices of bone tissue. “I thought ‘wait – that looks like blood, that doesn’t make sense’,” he says.

So he took a closer look. He combined multiple electron microscopy images to reconstruct the 3D shapes of the red blood cells, and saw dense spots inside them – the cells’ nuclei. This ruled out contamination by a person handling the bones, as human red blood cells don’t contain nuclei. “We lucked in – we had the right pair of eyes on the right fossils at the right time,” Maidment says.

Schweitzer has a mixed reaction to the work. “They did a good job of reining in their excitement and they do have amino acids, but haven’t ruled out alternatives,” she says. Amino acids could come from other sources such as fungal spores. But she is excited about an iron-carbon bond Bertazzo found in the mass spectrometry analysis – she has seen this in her own data.

Iron lies at the heart of haemoglobin, the molecule red blood cells use to carry oxygen – and has slight structural differences in mammals, birds and crocodiles. Schweitzer believes examining the bonds made by the iron could tell us more about dinosaur evolution. “If you can pull out the haemoglobin proteins, you might be able to show how and why dinosaurs evolved to be warm-blooded,” she says.

Kundrat hopes the discovery will inspire new techniques for analysing fossilised tissue remains – and that more palaeontologists will use them.

So the crumbling dinosaur bones sitting in your local museum may have more secrets to share. Could they one day yield DNA? Bertazzo found no evidence of it, but Schweitzer says “we will find dinosaur DNA in the future”. Maidment, too, is optimistic: “It’s unwise to say ‘never’ in science.”