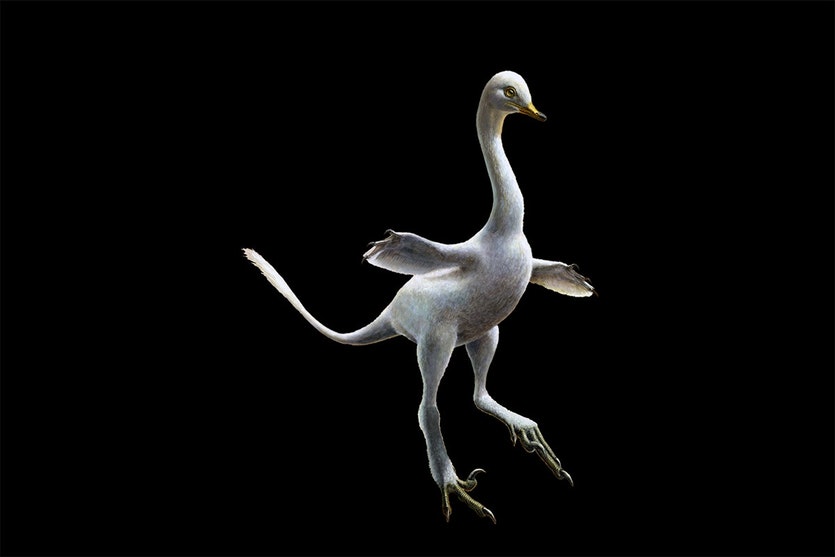 A stunning fossil – swiped from Mongolia’s Gobi Desert by poachers, but later acquired by scientists – is rewriting the books on the diversity of body types in carnivorous dinosaurs.

Newly described species Halszkaraptor escuilliei is so unlike anything seen before that a new dinosaur subfamily, the Halszkaraptorinae, has been created to contain it.

The size of a goose, the 75-million-year-old creature had the feet and claws of Velociraptor – but also a waterbird-like posture, the bill of a duck and the s-shaped neck of a swan. The shape of its forelimbs suggests it used them as paddles to propel itself underwater, much like penguins and diving seabirds do today.

The scientists who discovered it – including Andrea Cau at the Museum of Geology and Palaeontology Giovanni Capellini in Bologna, Italy and Pascal Godefroit at the Royal Belgian Institute of Natural Sciences (RBINS) in Brussels – believe it would have spent much of its time in the water, snatching fish up in its bill by darting out its elongated neck.

“Other dinosaurs, such as spinosaurs, have been suggested to be opportunistic fish-eaters, but this is the first time we have a dinosaur that’s also bird-like, with a long neck and aquatic lifestyle,” says Cau. “Using front limbs to manoeuvre in the water is new among [non-avian] dinosaurs.”

The fossil “illustrates how much of the diversity of Dinosauria remains undiscovered, even in intensely studied regions,” write his team in a paper in Nature.

The Ukhaa Tolgod locality, where the specimen was extracted by fossil poachers, “is a well-studied site, producing hundreds of skeletons,” comments Thomas R Holtz, a carnivorous dinosaur expert at the University of Maryland in College Park, US. “It shows that even localities that have been prospected for years can produce new surprises,” he says.

Not only is the animal unique, so was the method used to study it. Rather than remove the fragile fossil from the hard matrix of rock it is encased in, the team scanned it at the European Synchrotron Radiation Facility in Grenoble, France, to create a complete, high-resolution digital reconstruction of the skeleton. “This is probably the most detailed synchrotron analysis ever done on a fossil, in term of scan duration, accuracy and amount of data extracted,” Cau says.

The discovery is a reminder that the various branches of the tree of life are not each made up of “identical stereotyped forms”, adds Holtz. The wider Dromaeosauridae family of ‘raptors’, to which the new species belongs, “is not made up only of knife-toed murder-birds like Deinonychus and Velociraptor,” he says. “It also contained small-bodied fliers like Microraptor; long-snouted feeders on smaller animals; and now aquatic toothy pseudo-geese.”

The scientists have 6 terabytes of scan data to wade through, says Cau, who adds: “I am quite sure that not all the secrets of this dinosaur have yet been revealed.”