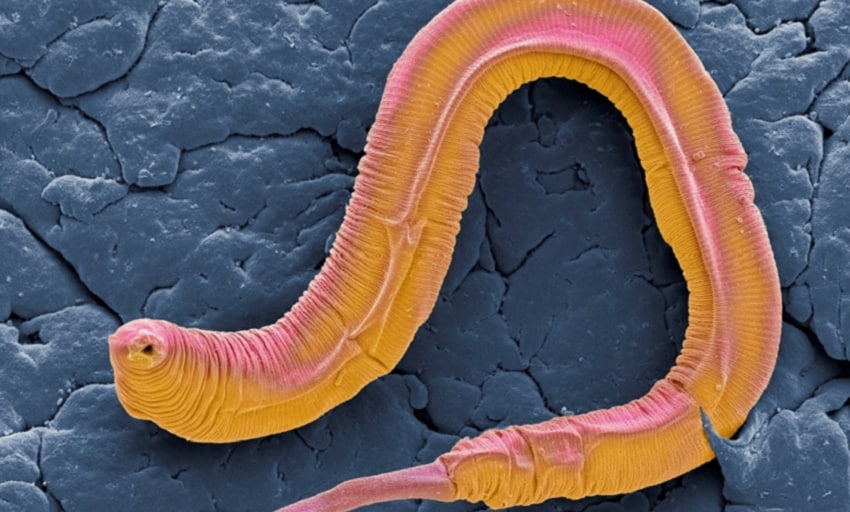 This innocent looking worm may be genetically predisposed to a short life. Credit: Steve Gschmeissner/Science Photo Library, via Getty Images
More on:
worms

Here’s one for the evolutionary theorists. British researchers say they have found worms that are genetically predisposed to die before reaching old age, apparently to benefit the colony by reducing food demand.

As such, says a team from University College London, it is the first evidence of programmed, adaptive death in an animal that has evolved due to the benefits to the community.

The results of their modelling study of the much-studied Caenorhabditis elegans are published in the journal Aging Cell.

The researchers caution that their findings are specific to worms whose life cycles are suited to such an adaptive mechanism.

Nonetheless, they suggest worms have major implications for studies of the biology of ageing, much of which is conducted using C. elegans. Other animals have genes similar to the lifespan-shortening worm genes that promote late-life disease.

As the researchers explain, evolutionary theorists originally believed ageing evolved to reduce the population in order to increase food availability for the young, but scientists have since shown this cannot be true for most animal species as longer-lived non-altruists would usually be favoured by natural selection.

However, certain organisms possess what appear to be self-destruct programs, preventing them from living beyond a certain age. For example, in C. elegans mutations to particular genes can increase their lifespan, presumably by switching off the life-shortening program.

In the recent study, the UCL researchers developed computer models of a C. elegans colony growing on a limited food supply and tested whether a shorter lifespan would increase the reproductive capacity of colonies, by generating the equivalent of colony seeds (a dispersal form of worm called a dauer).

They found that shorter lifespan, as well as shorter reproductive span and reduced adult feeding rate, increased the reproductive success of the colony.

“Our findings are consistent with the old theory that ageing is beneficial in one way, as they show how increasing food availability for your relatives by dying early can be a winning strategy, which we call consumer sacrifice,” says lead author David Gems.

“But adaptive death can only evolve under certain special conditions where populations of closely related individuals don’t mix with non-relatives. So this is not predicted to apply to humans, but it seems to happen a lot in colonial microorganisms.”

The authors say the next stage in their work is to study actual C. elegans colonies to test for behaviours predicted by the model, and then use that knowledge to build more realistic models to understand adaptive death.

Originally published by Cosmos as Worms programmed to die early