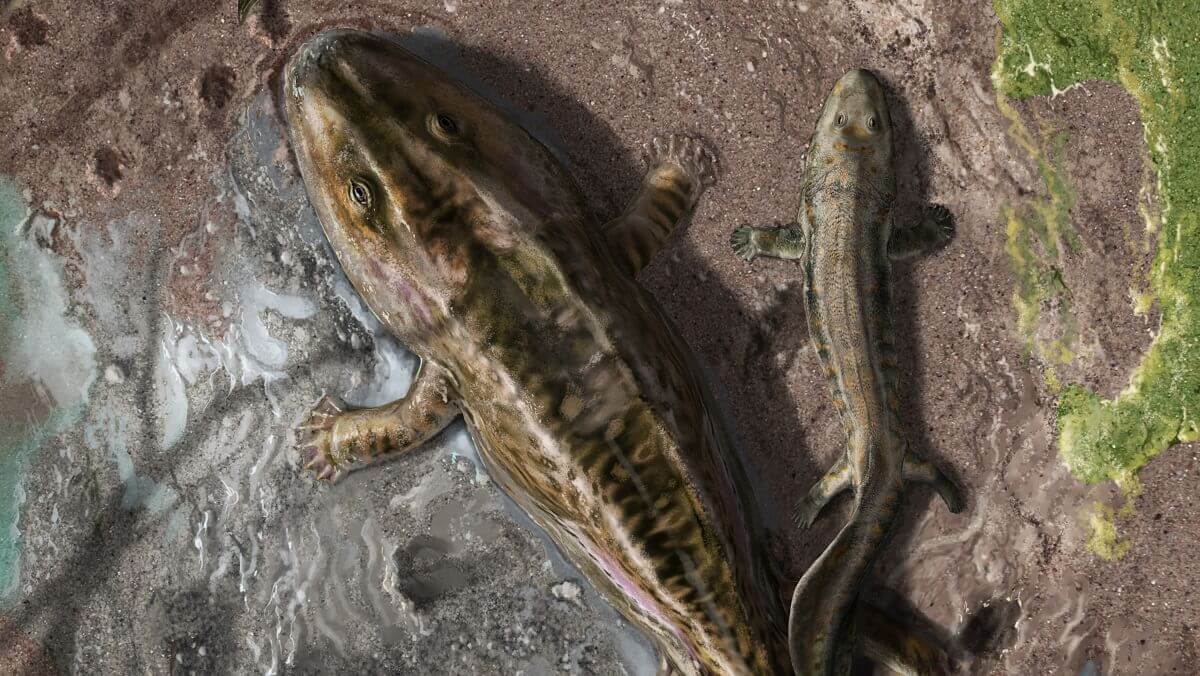 The aerial scene depicts two Late Devonian early tetrapods - Ichthyostega and Acanthostega - coming out of the water to move on land. Footprints trail behind the animals to show a sense of movement. Credit: Davide Bonadonna.
More on:
animal evolution

When did tetrapods evolve from fish? Around 390 million years ago and it happened really, really quickly, according to a team of researchers from Harvard University.

Despite representing a major evolutionary shift to life above water, the details of how fish grew legs and came on land somewhere between the Middle and Late Devonian (approximately 400 million to 360 million years ago) remain something of a mystery.

But in a study published in Nature Ecology and Evolution, the researchers have estimated the most accurate timeframe for the first appearance of legs, and it turns out the fish had to evolve the right anatomy before they could speciate.

“We were able to provide a very precise age for the origin of tetrapods at approximately 390 million years ago, 15 million years older than the oldest tetrapod body fossil,” says lead author Tiago R Simões.

The team used mathematical modelling to estimate the rates of evolution of legs and combined this with data from the fossils of footprints and bodies.

“Normally, footprint data shows up after body fossils of their track makers,” says senior author Stephanie E Pierce. “In this case, we have tetrapod footprints much older than the first body fossils – by several million years – which is extremely unusual. By combining both footprint and body fossils, we could search for a more precise age for the rise of tetrapods.”

Read more: The tracks of my tetrapod

The team also found non-legged cousins of tetrapods evolved very slowly, and their anatomical structures were stable and didn’t change much. The tetrapods, however, grew legs very quickly following the evolutionary split.

“We discovered the evolutionary lineages leading to the first tetrapods broke away from that stable pattern, acquiring several of the major new adaptive traits at incredibly fast rates that were sustained for approximately 30 million years,” says Simões.

The researchers also studied molecular information to see how different body parts – such as the skull, jaws and limbs – evolved, and found that all the body parts of tetrapods, not just the legs, evolved rapidly.

“This suggests that changes in the skull had a stronger role in the initial stages of the fish-to-tetrapod transition than changes in the rest of the skeleton,” says Pierce. “The evolution of limbs to life on land was important, but mostly at a later stage in tetrapod evolution, when they became more terrestrial.”

Simões adds: “We see several anatomical innovations in their skull related to feeding and food procurement, enabling a transition from a fish-like suction-based mode of prey capture to tetrapod-like biting, and an increase in orbit size and location.

“These changes prepared tetrapods to look for food on land and to explore new food resources not available to their fish relatives.”

Despite the rapid evolution, the team found there wasn’t a rapid accumulation of new species, which suggests the anatomy required to get on land evolved several million years before species diversification of tetrapods. Put simply: just a few early fish grew all the right anatomy before ‘leggy bois’ became abundant and diverse.

“What we’ve been finding in the last couple of years is that you have lots of anatomical changes during the construction of new animal body plans at short periods of geological time, generating high rates of anatomical evolution, like we’re seeing with the first tetrapods,” explains Simões.

“But in terms of number of species, they remained constrained and at really low numbers for a really long time, and only after tens of millions of years do they actually diversify and become higher in number of species.”

Pierce explains this simply: “It takes time to get a foothold in a new niche in order to take full advantage of it.

“Our study starts at the very beginning of this evolutionary story. There are many, many more chapters to come.

“We want to next dig further in terms of what happened after the origin of tetrapods, when they started to colonise land and diversify into new niches. How does that impact their anatomical rates of evolution compared to their species diversification across the planet? This is just the very beginning. It’s the introductory chapter to the book.”