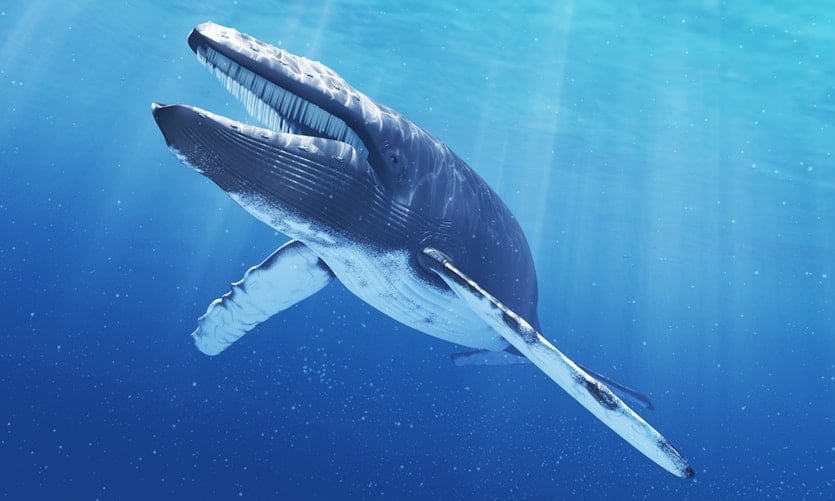 Baleen whales such as the blue whale (Balaenoptera musculus) are the biggest animals to have ever lived. But it turns out their tiny ancestors also sported deep, bass voices. Credit: SCIEPRO / Getty Images

Baleen whales – such as blue and humpback whales – produce and hear the lowest frequency sounds of any animal. Now new research suggests this trait was around long before the whales evolved to become so massive.

Travis Park, a biologist at Monash University in Australia, and colleagues compared the inner ear of early whales to their modern (and much bigger) counterparts and found them very similar.

The work was published in Proceedings of the Royal Society B.

When it comes to evolutionary wonders, baleen whales have the biggest brag book. The group encompasses 15 whale species, classified into four families, all of which are filter feeders.

Park and his crew set out to investigate how much baleen whales’ hearing abilities had changed over tens of millions of years.

The team scanned the ear bones of early whales – in this case, toothed species from around 34 million years ago, about the time the baleens split and formed their own evolutionary line.

Today, the smallest species of baleen whale, the minke, averages about 10 metres in length and weighs around five tonnes. Park’s ancient species were very small, by comparison – around the size of a dolphin.

The team created 3-D models of these early whales’ cochleae – the spiral cavities in the ear that facilitate hearing – and compared them to the anatomy of modern species.

To their surprise, the researchers found striking similarities between the two sets of cochleae, suggesting the animals’ low-frequency hearing is not an emergent property of increased body size but a pre-existing ability. It’s a finding that contradicts earlier research.

Park’s paper suggests that contrary to current orthodoxy, low frequency hearing in whales is of very ancient origin, while the high-frequency sensitivities and echolocation abilities of toothed whales are more recent evolutionary adaptations.

“This at last reveals that the earliest baleen whales heard low-frequency sound,” explains Park. “The similarities of baleen whale cochleae to older whales shows us that this ability evolved well before other extreme adaptations such as baleen, filter feeding and gigantic body size.”

Human ears are incapable of hearing sounds lower than 21 hertz. By comparison, baleen whales have been recorded singing at frequencies as low as 12 hertz.

Park says the finding doesn’t indicate whether baleen whales’ unique songs have been a hallmark of the group since prehistoric times.

“Although there’s no way of testing the idea, it’s tempting to think that [baleen whales] have been singing their complex, beautiful whale songs for millions of years,” he says.

“We’ve only just begun to decipher the earliest and strangest pages of the baleen whale story,” he says.