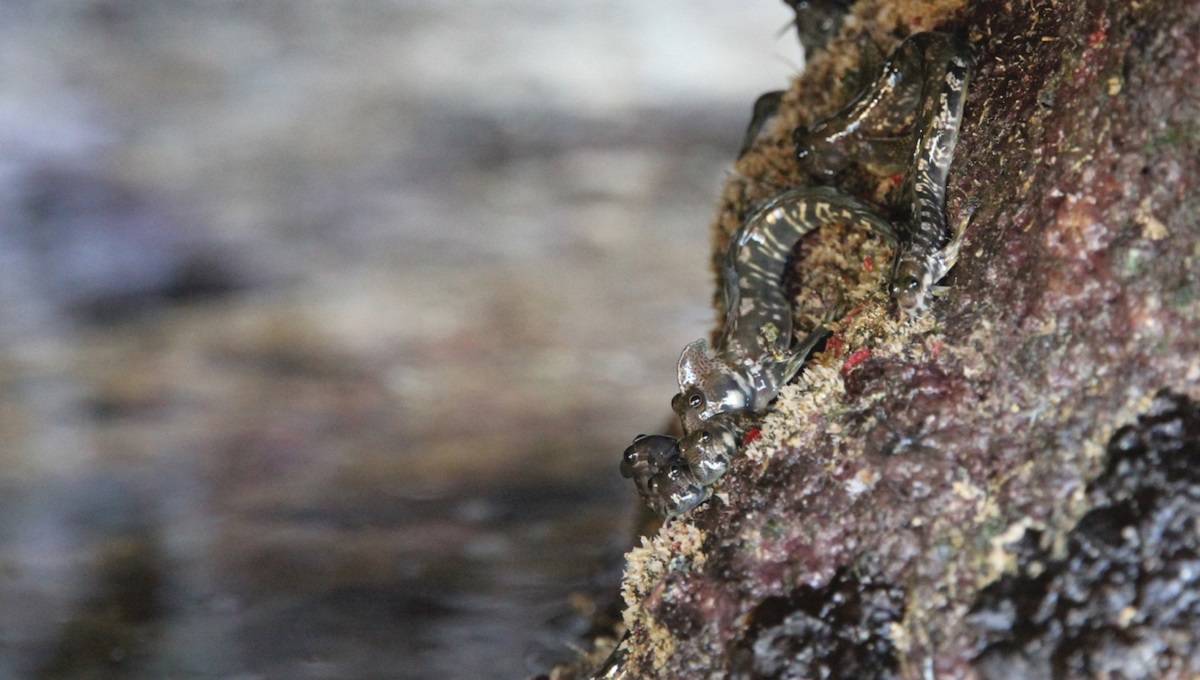 A group of Pacific leaping blennies out of the water on the foreshore of Guam. Credit: Terry Ord, UNSW Sydney
More on:
adaptation

Animals have evolved some incredible adaptations to survive, especially those that moved from water to land – but these can come at a cost.

After leaping out of water to escape nasty predators, cunning species of blenny fish (Blenniidae) then had to adapt to limited food choices, reports a study published in the journal Functional Ecology.

“We found having a broad diet and being behaviourally innovative or flexible has been a precursor to blenny fishes emerging from water for a life on land,” says lead author Terry Ord from the University of New South Wales.

But running into food restrictions triggered major changes in their morphology, especially their teeth, as they were forced to adapt into specialised rock scrapers to forage on algae and detritus.

To flourish on land, therefore, blennies went from being a “jack-of-all-trades” to a “master-of-one”, write Ord and his collaborator Peter Hundt, from the University of Minnesota in the US.

Fossils from hundreds of millions of years ago, back to the Late Devonian, have helped scientists glean insights into the evolutionary adaptations of aquatic animals as they made the radical transition to land.

While some species are happy to stay in the water, others that have ventured out divide their time between water and land, in the intertidal zone with fluctuating water levels and pools prone to rapid changes in temperature and oxygen levels.

Land blennies spend virtually their whole lives out of the water, but they stay in the splash zone to keep moist so they can breathe through their skin and gills. They defend territories, court each other and reproduce exclusively out of water.

Ord bonded with Hundt over their mutual fascination with the fish. “We both had extensive data collected on many, many different species of blenny from across the world,” he says.

“Peter had detailed information on diet and teeth morphology, while I had lots of data on behaviour and frequency of different species emerging from water for brief or extended periods on land.”

Pooling their data, they used complex evolutionary statistical models to shed light on the sequence of events that allowed blennies to make the transition, and how the species on land adapted to the specialised diet needed to survive.

Their findings could have broader implications, Ord notes, especially with the planet’s rapidly changing climate.

“[S]ome species that are already uniquely specialised to their existing environment are probably less able to make further transitions in habitat or might not cope well if abrupt changes occur in their environment,” he says.

The study is observational, so the pair is hoping to dream up a way to test their findings experimentally. They’re also curious about other adaptations.

“Terrestrial blennies are really agile out of water,” says Ord, “and I suspect they’ve adapted their body shape to allow them to hop about the rocks so freely. Which in turn implies they might not be able to go back to the water.

“It would also be exciting to know how their sensory systems might have adapted out of the water as well, given vision and smell would probably work quite differently in these environments.”